The focus of our research activities is to understand the molecular basis of allosteric transitions in proteins and how they relate to their function.

Much of our work has centered on analysis of cooperativity in the GroE and CCT/TRiC chaperonin systems (Horovitz and Willison, 2005). Steady-state and presteady-state kinetic data led us to propose a nested allosteric model for the GroEL double-ring (Yifrach and Horovitz, 1995). According to this model, each ring of GroEL is in equilibrium between a T state (with low affinity for ATP and high affinity for protein substrates) and an R state (with high affinity for ATP and low affinity for protein substrates), in accordance with the concerted Monod-Wyman-Changeux model.

A second level of allostery is reflected in inter-ring negative cooperativity that is described by the sequential Koshland-Nemethy-Filmer model. The three allosteric states of GroEL in the presence of ATP, TT, TR and RR, have been visualized using cryo-EM (White et al., 1997). We are currently analysing the allosteric mechanism of CCT, the eukaryotic homologue of GroEL. Each ring of CCT is composed of 8 different subunits in contrast to the 7 identical subunits of GroEL rings. Steady-state kinetic data for CCT shows that it also undergoes two ATP-induced allosteric transitions that, in contrast to GroEL, are not concerted (Rivenzon-Segal et al., 2005; Shimon et al., 2008).

Specific research questions we are addressing at the present time are: 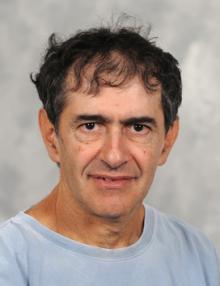 Ph.D., The Hebrew University of Jerusalem

Incumbent of the Carl and Dorothy Bennett Professorial Chair in Biochemistry