It’s hardly unusual to hear Portuguese being spoken these days on campus, a sign of the deepening ties between the Weizmann Institute and Brazilian friends. A driving force behind that partnership is Mario Fleck, an Executive Board member who will receive an honorary PhD in November at the International Board and who has spent a dozen years building a community of individuals whose friendship and philanthropy are making an indelible impact on Weizmann science.

It is largely thanks to his tireless leadership that the Weizmann-Brazil Tumor Bank, a major pillar of the Moross Integrated Cancer Center, came to fruition. But the story of how a once-small collective of friends reached that milestone in philanthropy begins with Mario—and an orange. Actually, bushels of them.

In 1974, following the Yom Kippur War, Mario Fleck was fresh out of a mechanical and industrial engineering undergraduate degree from the Pontifical Catholic University of Rio de Janeiro. He had heard that Israel’s kibbutzim needed volunteers to work in the fields and factories because all Israeli men had been deployed in the wake of the war. So he flew from his native Rio to begin working in the Tapuz program, named for the oranges that the volunteers picked to keep the industry going. Among the many places he visited in Israel that year was the Weizmann Institute of Science, when a friend took him for a drive through the campus. The visit was brief, but like many experiences that formative year, it stayed with him.

Over the years, Mario became a lay leader in his Jewish community and beyond, both in Rio and in São Paulo, where he lives today. He worked with Keren Hayesod and his children’s Jewish school, was President of the Jewish Federation of São Paulo, and is today President of the CIP Community in São Paulo. He has been a mainstay of this tight-knit community, and it came naturally. His mother had been born in Brazil to parents who escaped Poland before WWII, and his father had escaped Austria on the cusp of the war, in 1936.

Israel, too, was always part of his life.

“I am very interested in everything having to do with Israel,” Mario says. “The moment we understand that, as Jews, we are connected through our history and our future, is the moment when we understand that Israel must be a big component of our lives. I think the modern definition of Zionism for Diaspora Jews, even though we don’t live in Israel, is having some aspect of your life anchored in Israel.”

About 12 years ago, Mario visited Weizmann— 35 years after his first drive-through, and this time with an agenda. He met with a series of scientists and brainstormed with leadership about how to reignite interest in the Institute in Brazil, building on a small group of friends that already existed.

“I had a very warm meeting with Prof. Israel Bar-Joseph [Vice President of Resource Development and Public Affairs] in which he told me that he was most interested in building a community of friends in Brazil—that funds will come in time. Immediately, I appreciated the level of excellence that was evident here, both in the science and in management,” he recalls. Mario returned to his country intent on learning more about Weizmann and finding ways to develop a growing circle of friends.

“From the beginning, our goal was to cultivate a circle of people who know about the Institute, are curious about its science, and want to affiliate themselves with excellence,” says Mario.

“The Brazilian Society was a combination of teamwork, including with partners at the Institute and leaders in Brazil, and a great product—science—which is leading to results that we had never dreamt of,” says Weizmann Latin American CEO Dany Schmit. “Without a doubt, Mario’s PhD honoris causa is highly deserved.”

A special kind of energy

Although trained as an engineer, Mario Fleck went into business consulting, with Accenture; he then joined Rio Bravo Investments, one of the top independent asset management companies in the Brazilian financial market. There, he served as CEO until the company’s acquisition by a Chinese conglomerate. He is now an independent investor.

But perhaps his most passionate investment in the last decade-plus has been the Weizmann Institute. As a first step toward building a community of friends, Mario brought together his own friends for periodic meetings in his home, which he shares with his wife and committed companion Angela Brandão. He asked those guests who were physicians or scientists to educate the others on their area of expertise. His second step was to host Weizmann scientists for such gatherings, when they came to South America for meetings or conferences.

“Over two years of friend-building, we met with impressive scientists and became very excited about Weizmann,” he says. “Then we decided we were ready: it was time to support a project.”

Given the interest and focus on the environment and alternative energy in Brazil, the group decided to establish the Brazil-Israel Alternative Energy Fund to support Weizmann research on energy. The project, led by Prof. David Cahen of the Department of Materials and Interfaces, advanced a series of research avenues and also created a strong foundation of important work (which, importantly, later caught the interest of a major American foundation, the Helmsley Charitable Trust, which stepped forward with a major gift to continue to advance the field).

The group also began to support five outstanding Brazilian high school graduates per year to attend the Dr. Bessie F. Lawrence Summer Science Institute at Weizmann every July, through a competitive selection process. It became a flagship project of what by then was the formal Brazilian Friends of the Weizmann Institute, which, to date, has supported 70 youth, mostly non-Jews. Mario did this in partnership with Prof. Regina Markus, a scientist from the University of São Paulo who became a member of the Brazilian Friends.

“Most of these kids barely knew how to locate Israel on a map before they went,” says Mario. “But they come back as lifetime ambassadors for Israel, and for the Weizmann Institute.”

At some point along the way, Weizmann scientists traveling anywhere in South America knew that no trip was complete without a stop in Brazil. “I made sure that no Weizmann scientist would go to our corner of the world without visiting Brazil,” says Mario, who also uses his network to ensure Brazilian government officials travel to Israel and visit the campus. “Today, we have the most pro-Israel government in Brazil that there has ever been, and we must leverage that.” Meanwhile, Weizmann leadership began making regular trips to Brazil as well, meeting with a burgeoning group of individuals who were enthusiastic about deepening ties.

The second major project for the Brazilian Friends came in the form of a collaboration with Albert Einstein Medical Center in Rio, and the University of São Paulo. Sitting in a drawer at Einstein was an old formal cooperation agreement with Weizmann, but it was in name only. A group of friends led by Roberto and Renata Ruhman jump-started a collaboration by funding a series of joint projects. One was on a subtype of muscular dystrophy—with Prof. Maya Schuldiner from the Department of Molecular Genetics leading on the Weizmann side—and another used embryonic human lung tissue to repair damaged lungs, led by Prof. Yair Reisner of the Department of Immunology.

Then, when the Institute announced its plans several years ago to launch the $120 million Moross Integrated Cancer Center to bring the vast range of cancer research initiatives under one roof, Brazilian friends stepped forward, committing to raise $10 million for a major pillar. The Weizmann-Brazil Tumor Bank would be a repository of tumors which scientists working in all areas of cancer could utilize to further their studies, and it would be led by Prof. Yardena Samuels from the Department of Molecular Cell Biology, an expert in melanoma who also runs the EKARD Institute for Cancer Diagnosis Research within the Moross ICC.

“My mother died of cancer, and my father had prostate cancer,” says Mario. “Cancer is something that scares everybody. The idea that one day cancer could be transformed into a chronic disease rather than a deadly one—and that we could be a part of making this happen—was incredibly appealing to us. But initially, it felt too big for us. Moreover, the Brazilian economy isn’t good, and we have a Jewish community of 120,000 people with many needs, so there is a lot of competition for philanthropic funds.” 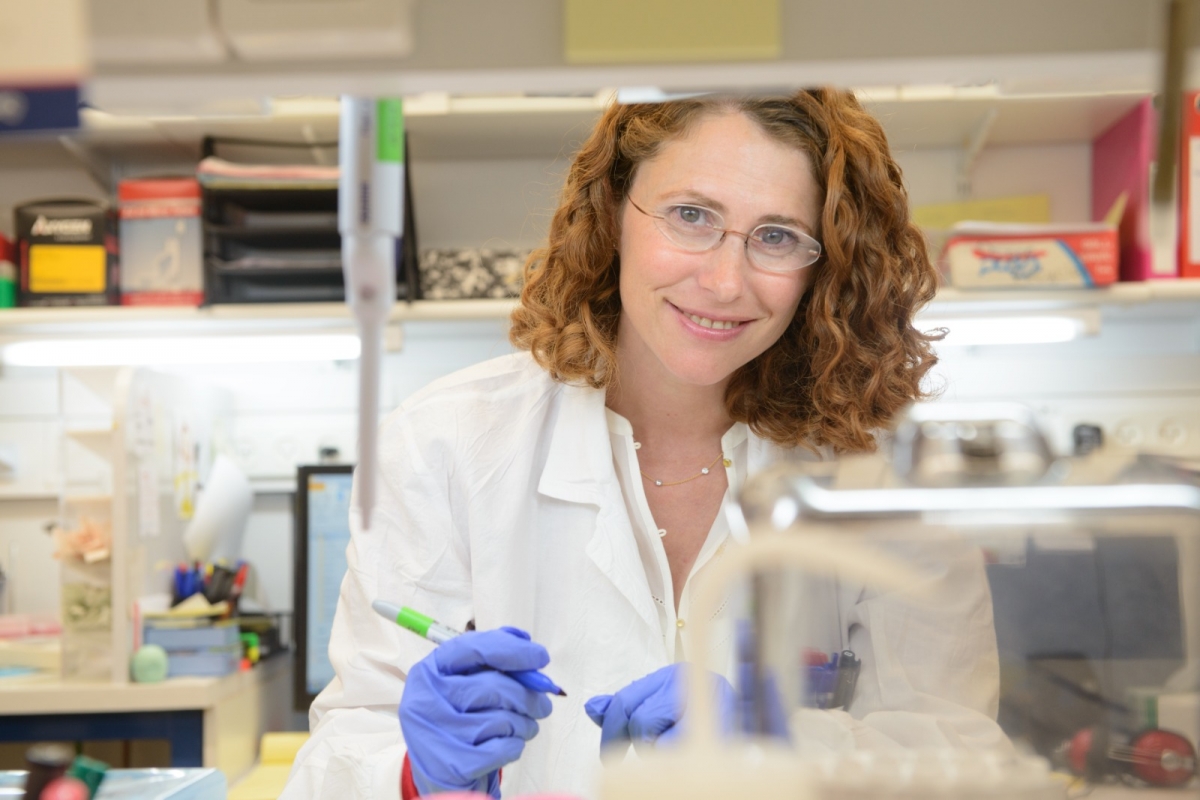 But they went for it. And over the last several years, donors, both Jewish and non-Jewish, came on board, creating what is now an active and involved community of philanthropists and other friends that are advancing Weizmann’s profile in Brazil.

Says Prof. Moshe Oren, Director of the Moross Integrated Cancer Center: “The Weizmann-Brazil Tumor Bank offers Weizmann Institute cancer researchers a unique opportunity—a rarity in the world. It will enable multiple researchers with different and complementary expertise to obtain and integrate extensive molecular and biological data on the same individual tumors, making the sum much bigger than its different parts.”
Meanwhile, as more Brazilians learned about the diversity of scientific areas at the Institute, they began seeking out areas that spoke to them, and supporting them individually. Among the projects they have supported is a collaboration with MIT; a chair for Prof. Alon Chen of the Department of Neurobiology and the Institute’s President-elect; and collaborations with FAPESP, the São Paulo Research Association.

None of this would have happened without the impact of a visit on campus, notes Mario. “I made sure that all the Brazilians I know who were active in the community and who were planning a visit to Israel would visit Weizmann.” Mario and Angela travel to Israel four times a year. (Mario has two children, Michel and Debora, and three grandchildren).

“I believe that it is the obligation of Diaspora Jews to do three things,” he says. “First, if you are an investor, invest in Israeli companies. Second, travel to Israel and spend money here. Third, do philanthropy. Even if you don’t have much money to spend, spend it a modest way and spend it in Israel. Open the gates and set an example, and others will follow. Strengthen the ties between Israel and Diaspora Jews. And do this all, even if you don’t agree with the politics. This isn’t about politics. It’s about the arc of history.”

Though the Tumor Bank fundraising project is complete, Brazilian friends are hardly taking a break. Says Mario, “Now we are asking ourselves: What’s next?”