They have supported particle physics, neurobiology, alternative energy, microbial genomics, science education, and have funded a Mexican postdoctoral fellowship at the Institute.

“I just get excited - I get interested in this and that, and fall in love with a new scientific subject after meeting with a scientist and connecting with him or her,” says Mr. Kushner in an interview in the Kushners' home in Mexico City. “I like to understand a little bit about a lot of things, and there’s no better place for that than Weizmann,” he says.

Martin Kushner is a nuclear physicist by training; he received his degree in physics from the Universidad Nacional Autónoma de México. The “bible” of nuclear physics at the time, from which he studied, was written by two Weizmann Institute physicists, Profs. Igal Talmi and Amos De-Shalit. He taught for a few years at the university level, and went on to work for the Federal Electricity Commission of Mexico, the state-owned national electric power company, as an advisor of the country’s only nuclear-powered electricity facility. There, he tracked radioactive material, ensuring it would not contaminate the local water sources or the nearby coast.

He later moved into the business world, joining the family’s hardware store chain across Mexico. But his interest in science - specifically nuclear physics - remained. That interest led the couple to support the lab of Dr. Shikma Bressler of the Department of Particle Physics and Astrophysics.

“When I was studying nuclear physics and working in the field, the behavior of the nucleus was reasonably understood,” he says. Particle physics involves the study of the properties, relationships, and interactions of subatomic particles. “Now everything has changed, and scientists are finding more particles, new ways of measuring their properties and understanding their behavior. Shikma is doing incredibly interesting work and I am looking forward to following it.”

The Kushners became involved with the Weizmann Institute about a decade ago, and in 2010 Martin became the president of the Mexican Association of Friends, casually referred to by its members as “the Amigos.” Mexico’s Jewish community is small - about 45,000 people in all - but it has strong ties to Israel. As president, he helped build awareness of the Institute, including through the awarding of the prestigious Weizmann Prize for the best PhD thesis, operated jointly with the Mexican Academy of Sciences. He continued the strong historical legacy of the Mexican committee in nourishing research at the Weizmann Institute, and widened the circle of supporters. He completed his presidency last year.

When the media headlines revealed triumphantly in July 2012 that the once-elusive Higgs boson particle had been found - and thus a cornerstone of the so-called Standard Model of particle physics clarified - the thousands of physicists who had been working for decades on this puzzle didn’t pack their bags, call it a day, and go home. On the contrary - the finding opened the door to reams of new research on the fundamental building blocks of the universe. And Dr. Bressler, too, saw that day not as an end point but a new starting point to explore just what new physics the Higgs might be hiding.

As an active member of the ATLAS collaboration at the Large Hadron Collider at CERN, Dr. Bressler is now spearheading a search for the so-called “lepton flavor violating decays” of the Higgs boson - which might reveal that the Higgs boson is a lot more exciting than previously assumed. It is true fundamental science: understanding the very building blocks of matter. In preparation for future experiments and future discoveries, she is developing new detection techniques. These studies also have potential for applications in homeland security, medicine, archaeology, and more.

“The Kushners care about this field of work and it is meaningful to have a supporter with whom I can share my ideas and plans. They understand what I’m doing it and, most importantly, why I’m doing it,” says Dr. Bressler. After completing her PhD at the Technion, Dr. Bressler joined the Weizmann Institute as a postdoctoral fellow, moved up to a scientist position, and in 2015 became a principal investigator (PI) - a testament to her talent, because these positions are typically filled by scientists who perform their postdoc studies abroad.

Among the scientists supported by the Kushners is Prof. Roee Ozeri of the Department of Physics of Complex Systems.

Prof. Ozeri studies the basic building blocks needed for quantum computing - the development of computing systems that make use of the principles of quantum mechanics. Such quantum systems have the potential to perform immense information-processing tasks that are out of reach of regular computers, and they can have a vastly greater capacity for storing information.

If such systems are indeed built, they will revolutionize the world of computing, requiring, for example, an entirely new approach to ensuring the secrecy of information in online banking transactions. Prof. Ozeri focuses on one of the greatest challenges in developing quantum computers: finding appropriate units, or bits, for storing information.

To create the basic building blocks for quantum information systems, Prof. Ozeri and his group use ultra-cold trapped ions. And when he says cold, he means very cold - as cold as it gets. The Ozeri group laser-cool their ions to a temperature of a few millionths of a degree above absolute zero, where they can only occupy the ground-state of their trapping potential. These trapped ions are well isolated from the noisy lab environment. In fact, the only way the scientists can investigate these super-cold ions is by using laser light. Under these conditions, the laws that govern ion dynamics are those of quantum mechanics.

To this end, Prof. Ozeri and his group succeeded recently in detecting the minuscule magnetic interaction between two individual electrons that were bound to two ions separated by the atomically vast distance of about two micrometers. The background noise was a million times stronger than the weak force he measured. However, his achievement not only taught new information about an essential atomic force, but may also be extremely useful in the emerging fields of quantum sensing and quantum information systems - a whole new era in electronics and computing.

Dr. Shikma Bressler is funded by The Benoziyo Fund for the Advancement of Science, Martin Kushner Schnur, Mexico, The Willner Family Leadership Institute for the Weizmann Institute of Science. 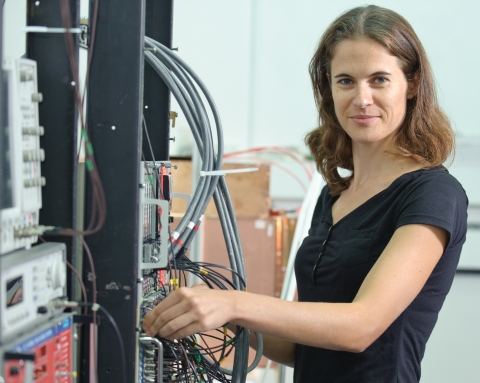 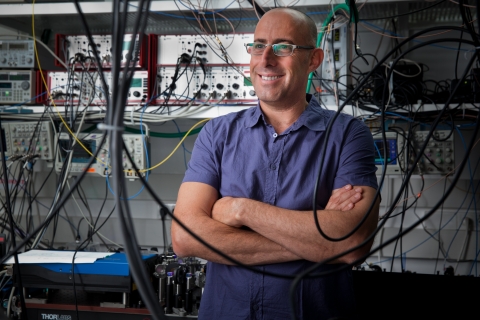