A family affair, and a slice of Weizmann history

That developm Few family histories are as deeply intertwined with the history of the Weizmann Institute of Science as that of the family of Rina Mayer—and at the same time, the history of the early development of the State of Israel itself.

Rina’s parents, the late Sara and Moshe Mayer, were among the country’s financial elite, and Rina spent her childhood moving between Tel Aviv, London, and Switzerland as a consequence of her father’s real estate enterprises. It was those enterprises that brought him together with Sir Isaac Wolfson and Sir Charles Clore of the UK, who made some of their first investments in Israel with Mayer—and they in turn brought Sara and Moshe Mayer into their small circle of friends who were early supporters and shapers of the Weizmann Institute. The guests around her parents’ dinner table included other central figures at the Institute, including Meir Weisgal and his wife. (Weisgal was Dr. Chaim Weizmann’s personal assistant and served in various leadership roles).

Sir Isaac Wolfson, one of the "founding fathers" of the Institute thanks to his philanthropy and business acumen, first met the Mayer brothers in 1955 and purchased a quarter of the stock of their Export Bank; it was among Sir Isaac’s first investments in Israel. His friend Sir Charles Clore later followed suit. Then, in 1961, the Mayer brothers, together with Sir Isaac and Sir Charles and the Israeli government, opened an investment company together, Wolfson Clore Mayer Corp. Ltd., which has made numerous investments in Israel throughout the years, primarily in real estate and construction. The partnership lasted until 1976, when Sir Isaac sold his share to the Mayer brothers. Rina serves as its chairperson today.

Rina lives in Savyon, where she was one of the town’s early residents and where she raised her two boys, Danny and Jonathan, and her daughter Andrea. Jonathan and Rina are Institute board members.

When the Israeli daily Ha’aretz published an in-depth story about Moshe Mayer’s business interests in Africa and Israel in 1970, when Mayer was 61, it declared, “The State of Israel is too small for Moshe Mayer. He is constructing housing, skyscrapers, and luxury hotels, and building rivieras and presidential palaces.”

Mayer was a self-made man who developed real estate projects in pre-state Israel and managed some 50 development companies worldwide, from resorts in the Catskills to the Shalom Meir Tower in Tel Aviv, named for his father. At the time it was built, in 1965, it was the tallest skyscraper in the Middle East, though it caused controversy because the historic Herzliya Hebrew Gymnasium was razed for its construction.In the 1960s, he was one of the first Israelis to eye West Africa for its investment potential. In 1970, he completed the construction of Hotel Ivoire in the Ivory Coast, which was hailed at the time as the most beautiful hotel in the world, and then went on to develop an entire tropical city around it, known as the African Riviera. The African Riviera was planned by a team of Israeli architects—headed by Rina’s husband Spotlight On at the time, Thomas Leitersdorf—and funded by international financial bodies.
ent work wasn’t simply money in the pocket of Moshe Mayer and his two brothers, who worked with him. It paved the way for an unprecedented process of modernization led by Israelis in the Ivory Coast and other West African countries. Israel began exporting technologies and agricultural expertise and established new infrastructure. Israeli architects and planners even aided in drawing up national master plans for Chad and Sierra Leone; communal settlements reminiscent of the kibbutz were established; and public housing similar to that erected in Israel in the 1950s was constructed.

This tight relationship with Africa lasted until the late 1970s, when the Six Day War and the Yom Kippur War turned the tide of political opinion in Africa vis-à-vis Israel. Leitersdorf went on to a successful career in architecture in Israel, including planning the sprawling Jerusalem suburb of Ma’aleh Adumim. Mayer turned his attentions elsewhere, having laid the seeds for his businesses in Israel, Europe, and the U.S. long before.

That nucleus of philanthropic families, however, was not the Mayer family’s first brush with the Institute. Sara Mayer was born into the Itskovich family (on her mother's side), which owned lucrative oil and gas businesses in Baku, Azerbaijan, before coming to Palestine. In Baku, Sara’s maternal grandparents had connections to the Nobel family—for which the Nobel Prizes were named—which ran the most lucrative oil company in Baku, on the shores of the Caspian Sea.

The Itskoviches were prominent members of the Jewish community and were well-known in Zionist circles abroad, corresponding at times with Dr. Chaim Weizmann before his establishment of the Daniel Sieff Institute in 1934, which later became the Weizmann Institute of Science. In fact, Rina’s maternal grandparents were among the prime movers of many fundraising campaigns to promote the colonization of Palestine. In 1912, the family made a major contribution for the construction of the Hebrew University of Jerusalem.

The relationship between the Mayer family and the Weizmann Institute unfolded over the course of several decades. Among their gifts was the establishment of the Sara and Moshe Mayer Lab for Prof. Robert Fluhr of the Department of Plant and Environmental Sciences.

Sara received an honorary doctorate from the Institute in 1997. Upon her death in 2002, Prof. Ilan Chet, then-President of the Weizmann Institute, wrote in a condolence letter to Rina, “Your mother was among the most generous, caring, and committed Israeli friends of the Institute… She and your late father helped develop and advance the Institute throughout 30 years.” The Institute created the Sara Mayer Playground in her memory in 2003.

“And my connection only strengthened as I became involved on my own.”

During her service in the intelligence unit of the Israel Defense Forces, she came to the Institute once a week to do decoding work on WEIZAC, the first computer in the Middle East, housed in the Ziskind Building.

Years later, following his full term of military service, her son Danny was diagnosed with schizophrenia and Rina became driven to better understand the biological origins of the disease.

In 1994, Rina’s family invested in Neurogenic (via Yeda, the Institute’s tech transfer arm), a company established as the result of research conducted by Prof. Meir Shinitzky, a member of the Department of Biological Chemistry, for the purpose of developing a blood test for the diagnosis of schizophrenia. Rina has religiously followed the ongoing work of Institute scientists throughout the years and continues to be engaged today. She has given generously to the Institute, including to the Davidson Institute of Science Education and its School of Contemporary Science, and to support new scientists, as well as general research.
“I feel a special closeness to the origins of the Institute through my mother’s family, and of course the many decades throughout which my parents were involved,” says Rina.

The Mayer family was intricately connected to many aspects of Israel's history in the arts, culture and politics.

Rina’s sister Kena is married to the politician Zalman Shoval, who served as ambassador to the U.S. and was a member of Knesset. Her mother-inlaw was the late Finy Leitersdorf, who was known as the mother of Israeli fashion and lived with her son and daughter-in-law in her later years. Finy was the widow of artist Yohanan Simon, known for his murals and paintings which appeared in public buildings and hotels throughout Israel. Rina maintains a collection of Simon’s works and Finy’s fashion collection in her house in Savyon. 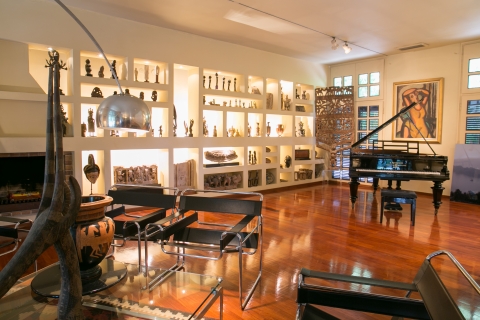 Rina Mayer's home in Savyon, which houses her African and world art collection 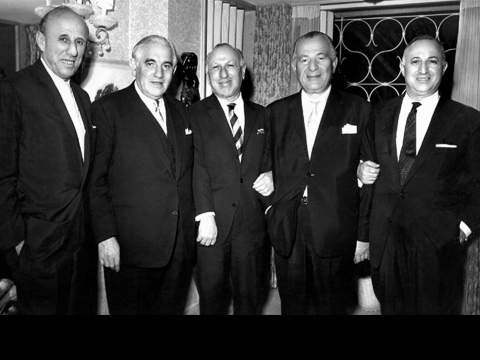