An intrinsic connection to science and medicine, and a committed partnership with Weizmann

What happens when two individuals with exemplary careers in science and medicine, a goes-without-saying understanding of the value of basic research, and the belief that stronger Israeli science will lead to a stronger Israel, are introduced to the Weizmann Institute of Science? The answer: a lifelong partnership.

Vera and John Schwartz of Pacific Palisades, California, will both receive honorary doctorates from the Weizmann Institute at the Annual General Meeting of the International Board this November, in recognition of their outstanding careers and commitment to the Institute. Already members of the President’s Circle and the International Board, this year they will become two of the seven PhD recipients whose lives reflect extraordinary lifetime achievement and who will be honored on November 8.

“John and Vera have translated their financial success into philanthropy, and, in the most beautiful way, circled back to the things that are important to them—science and health—trusting in the Weizmann management to direct them to support areas that are needed most at any given time,” says Prof. Alon Chen, Weizmann Institute President and incumbent of the Vera and John Schwartz Professorial Chair in Neurobiology. “They are curious and knowledgeable and, above and beyond their generous giving, they share our core values. We are very lucky to count them as true partners.”

Self-described ‘science nerds’, the Schwartzes were first introduced to the Weizmann Institute by Lester Crown of Chicago in 2006. Mr. Crown, a longtime supporter and International Board Life Member, invited them to an ‘Air ACWIS’ trip to Jordan and Israel, culminating in a visit to the Weizmann Institute. They found common ground with the other participants and recall the trip as “magical and inspiring,” says Vera. Then, at the Institute’s Global Gathering in New York in 2014, they met Prof. Eran Elinav of the Department of Immunology, whose research on the human microbiome—and how different foods affect people differently—ignited their interest given their personal medical histories.

‘The kibbutz of science’

Vera, a lover of math from childhood, is a lifelong dancer. She spent her career in major leadership roles involving health and science: first at UCLA, where she oversaw the allocation of funding for neuropsychiatric research, and then as Chief Operating Officer and Chief Financial Officer at the Department of Veteran Affairs’ Health Services Research Center in Los Angeles. In these roles, she witnessed research success, but also how competition between scientists and physicians for funding predominates. The Weizmann Institute, she says, “was an epiphany… I saw the difference between environments in which investigators are proprietary about their research, and Weizmann, where it seems no one is. It was an eye-opener for me.”

She continues, “At Weizmann, scientists work collaboratively across faculties and freely share information. And that’s exactly what’s needed in science. But 20 years ago, that wasn’t happening as much as it is today, and new knowledge was held close to the chest. Weizmann was a pioneer in that respect; its scientists were working across the departmental and faculty borders since the beginning… It’s like the kibbutz of science.”

John concurs: “I was just blown away by that whole concept—and the fact that Weizmann provides its scientists with everything they need to succeed from day one.”

For John, his career experiences also led him to the Institute. After attending MIT and graduating from Columbia, he earned his MD at New York University. He trained in psychiatry at NYU Hospital and Bellevue Hospital in Manhattan and completed his child psychiatry fellowship at the University of California, Irvine. After a decade of clinical work, he left medical practice to become what he calls an “information entrepreneur”. In the 1970s, he saw the need for physicians to stay up to date on the accelerating scientific and clinical advances in medicine.

John launched Continuing Medical Education, Inc. (CME), which updated physicians and other health care providers across a wide range of specialties with medical conferences throughout the U.S., medical newspapers, and medical trade shows. CME was a pioneer in the clinical development of physicians and helped elevate the quality of medical practice well before the advent of the Internet and before many imitative companies followed in its footsteps. By the time he sold his company in 1999, the field was booming and the new owner outbid 64 competitors to acquire CME. Then, flush with funds from the sale of CME and with an impetus to learn about financial investing, he started a similar business for hedge fund managers.
After the death of his mother and the untimely passing of his last surviving sibling, Bob, in 2014, he turned full-time to philanthropy and family.

“I have always been interested in good ideas, and implementing them. So as Vera and I learned more about Weizmann, I could see that happening on a daily basis,” says John. “I also thought: Everyone is going to give to many causes here in the U.S., but who is going to give to Jewish causes? The fusion of collaborative science and Israel made it obvious to us that Weizmann was our cause.”

Over the years, the Schwartzes have directed the outsized share of their philanthropy to the Weizmann Institute, including their most recent gift to the Frontiers of the Universe flagship project in particle physics and astrophysics. Among other gifts, they also established the Vera Rosenberg Schwartz Research Fellow Chair for a senior staff scientist in Dr. Elinav’s lab, whose first incumbent is Dr. Hagit Shapiro. Dr. Shapiro investigates the interaction between the gut microbiome and the host immune system in inflammatory bowel diseases such as Crohn’s disease. Then, in the interest of deepening collaboration in an area that is close to their hearts, they established the Vera and John Schwartz Family Center for Metabolic Biology, headed by plant scientist Prof. Asaph Aharoni. The center is advancing research on metabolomics, the study of the thousands of chemicals (metabolites) active in an organism (plant, animal, or human); and the broad spectrum of microbes, called the microbiome, that co-exist with them. These metabolites play an essential role in the functioning of the cell and the organism and are becoming increasingly recognized as important factors in health and disease.

“The service provided by the center has been a game-changer for many Weizmann scientists who can now comprehensively investigate the metabolic state of their focus organism, tissues, and cells,” says Prof. Aharoni. “It is no doubt the most advanced service facility for metabolite analysis in the country and amongst the top worldwide.”

Following that gift, the Schwartzes common interest in neuroscience—and immediate personal chemistry with Prof. Chen of the Department of Brain Sciences—led them to sponsor his professorial chair.

As prominent as their many photographs of their three children and eight grandchildren in their home are their many scrolls of appreciation from the Weizmann Institute for their partnership and generosity, which are hung in the foyer. “When people walk into our home, I want them to see how we cherish the Weizmann Institute,” says John. “And by the time they leave, I hope they will already be thinking about Weizmann.”

Like John’s affinity for Israel and commitment to Jewish continuity, Vera’s is just as strong. Her parents were from Hungary; her father was a film distributor for 20th Century Fox who saw the impending doom for the Jews of Europe during his travels across the continent. That early knowledge enabled the newlyweds’ narrow escape on a refugee boat from Genoa, Italy, in 1940, to New York.

Numerous family members were killed at Auschwitz, and others who were sent to a labor camp survived and later immigrated to Israel, where they settled in Haifa. Vera was born and grew up in LA, but her father struggled with the new culture and language. Her mother fought depression over the loss of her family members in the Holocaust for the rest of her life.

John’s father, with his PhD in economics, was recruited by the Office of Strategic Services (OSS), a wartime intelligence agency operating behind enemy lines during World War II and predecessor to the CIA. Returning to civilian life, he became professor of economics at Syracuse University until he was recruited to the Editorial Board of the New York Times.

“Today we’re thinking about our daughter, Tracy, and our sons David and Mark, and our grandchildren,” says John. “We hope our relationship with Weizmann will inspire them to also support Weizmann, science for the benefit of humanity, and Israel.” 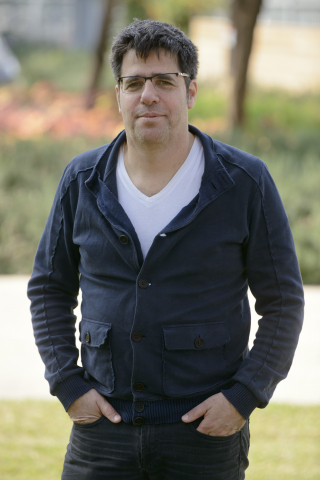 Prof. Asaph Aharoni, Head of of the Schwartz Center for Metabolic Biology 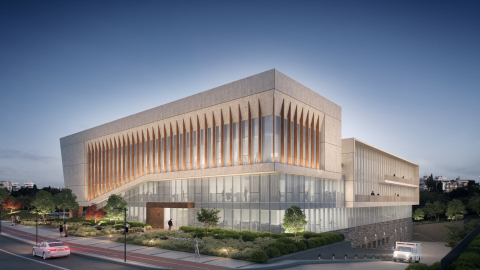 Rendering of the future Frontiers of the Universe physics building