Dr. Michal Ramot remembers what first got her seriously interested in what would turn out to be her career path. In her youth, she read Robert A. Heinlein’s science fiction novel Stranger in a Strange Land. The main character was born and raised on Mars, where he learned self-healing methods through mental training. Back then, it fascinated the young reader.

Some years later, after graduating with a bachelor’s degree in mathematics and moving on to specialize in neuroscience, she returned to this idea. “I thought the brain could bring itself to a more optimal state if we’d be able to locate the region which needs to be modified and manipulate it directly,” she recalls. Ever since then, she has been involved in the development of scientific methods for improving brain function.

A new scientist in the Weizmann Institute’s Department of Brain Sciences, Dr. Ramot focuses on communication between neural systems and its impact on complex cognitive functions, and seeks to gain new insights on memory and learning. She hopes to channel these insights into improving function in people on the autistm spectrum, aging individuals, and others. Her innovative approaches may help people who are struggling to learn new languages or social skills, and may also help those with mental illness overcome persistent traumatic memories.

Her research zeroes in on the interaction between brain regions. More precisely, she wants to find out how connections between different regions contribute to complex cognitive abilities. These also span tasks which we consider as simple. “Every simple task is composed of complex processes,” she explains. “For example, when we answer the phone, we are actually engaging in dozens of complex operations and cognitive processes that come together to make it happen.”

The challenge in studying the human brain is that experiments cannot be invasive. Therefore, Dr. Ramot’s experimental systems are delicate and sophisticated. They include neuro-feedback, a tool for training the brain by providing positive feedback for desired brain activity and negative feedback for unwanted activity. The study participants are generally unaware of the gentle training taking place in their neural networks.

To train the brain without direct behavior training, Dr. Ramot attempts to locate the brain regions responsible for different functions. She uses fMRI to measure neural signals and subsequently, tries to track the systems’ function and their interconnections. “I am trying to find out not only which system is active during a particular task, but also what is the function of the different systems and of the interactions between them. If I can manipulate the interaction between the various systems and see that the change in the network results in a behavioral change, I will be able to understand the function of the network.”

Flexibility of thought has been a fundamental part of Dr. Ramot’s own life trajectory. In her childhood, she moved with her family from country to country, following her father’s career in the Israeli diplomatic service and, as a result, she now speaks five languages. She went on to earn her PhD in 2013 from Hebrew University’s Interdisciplinary Center for Neural Computation, under the joint supervision of Prof. Leon Deouell from HUJI and Prof. Rafi Malach from the Weizmann Institute. Following an initial postdoctoral fellowship in Prof. Malach’s lab, she completed a fellowship at the U.S. National Institute of Mental Health in Bethesda, Maryland, before joining the Institute.

Her lab at the Weizmann Institute will become a part of the Institute for Brain and Neural Sciences, which will include senior researchers studying such topics as cognition, brain degeneration, mental health, and more, working across multiple disciplines and departments. 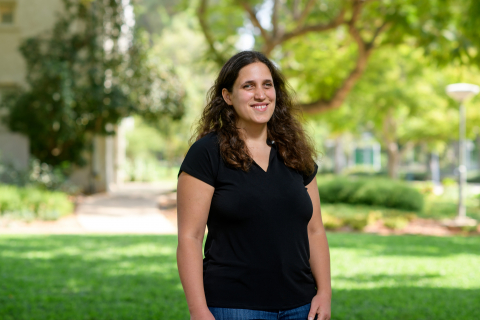 Dr. Michal Ramot hopes to channel her insights into improving function in people on the autism spectrum, aging individuals, and those with mental illness who are battling persistent traumatic memories.