Stress in the womb raises risk for compulsive eating

While the symptoms of binge-eating disorder usually first appear in adolescence, a new study shows that the seeds of the disorder may be sown in the womb as a result of maternal stress during pregnancy.

The research was conducted by a team of Weizmann Institute neuroscientists led by Prof. Alon Chen of the Department of Neurobiology. In the disorder, known as BED, a person loses control over his or her eating, but without the purging typical of bulimia.

In a study published in Cell Metabolism, Prof. Chen and his postdoctoral fellow, Dr. Mariana Schroeder, showed how prenatal stress can predispose teens to exhibit BED by altering the activity of genes in the hypothalamus—the brain’s fight-or-flight versus rest-and-digest control center. But there’s good news: the scientists also found that BED can be prevented, despite prenatal stress, with a proper diet in adolescence.

Our brains know what to do if we’re in danger. The hypothalamus and other related brain areas send out a neuromodulator—a type of neurotransmitter—called corticotropin-releasing factor (CRF). CRF triggers the release of the hormone cortisol, which affects many of the body responses to stressful stimuli; it also increases our levels of fear, anxiety, and vigilance. When a pregnant female is under stress, her increased CRF levels not only affect her own functioning, but also communicate to her fetus that the world out there isn’t safe - a process known as gestational communication.

How does the fetus’ adaptation to gestational danger messages in utero lead to heightened risk of BED in adolescence?

Prof. Chen and his team artificially raised the CRF levels in the brains of pregnant mice and then tracked the pups as they neared adolescence. The adolescent pups were fed a high-calorie diet over very short periods—a regimen known to trigger binge-eating. The findings were clear: pups born to mothers exposed to stress during pregnancy tended to develop BED symptoms when they were given an erratic, high-calorie diet.

Moreover, the team found that prenatal exposure to a mother’s heightened CRF levels actually led to epigenetic changes - that is, alterations to the DNA that affect how active a particular gene is, rather than a change to the genetic code itself. Specifically, they found a dramatically decreased amount of methylation - in which a methyl group binds to a DNA segment - in the hypothalamus of embryos.

“This finding suggests that prenatal exposure to the mother’s heightened CRF levels leads to altered hypothalamic methylation and functionality, and thus an increased susceptibility to eating disorders later on,” says Prof. Chen.

The finding holds promise for treating BED, he adds. If under-methylation of the hypothalamus contributes to risk for BED, the fix may lie in raising the quantity of methyl groups consumed. In fact, by feeding the at-risk pups with a diet designed to provide just the right amount of methyl groups, the researchers were able to mitigate the effects of the prenatal stress. Post-diet, when exposed to the nutritional challenge of erratic, high-calorie meals, the mice didn’t eat compulsively. 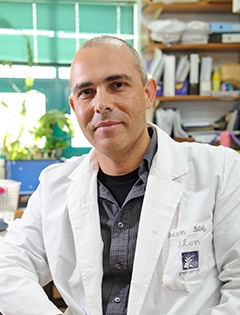