At home in the world, and at Weizmann

Dwek, an involved leader and major supporter of the Institute who died last July in London, led a finance career marked by out-of-the-box ways of working that reshaped the banking sector in Switzerland. His work on behalf of the Institute was consistently marked by fresh ideas and initiatives that have strengthened the Institute in multiple ways.

With his passing at age 81, the Weizmann Institute lost a close friend. He was a longtime member of the International and Executive Boards and Chairman of its European Committee, in which capacity he strengthened the Institute’s network in Europe and recruited numerous new supporters. Among them were his brother Solo (with whom he consistently partnered in their philanthropy to the Weizmann Institute) and their cousin, Raoul de Picciotto, who recently gave a major gift to support the construction of the largest building on campus, for scientific support services. Dwek helped establish W-GEM, the Institute’s endowment, and PAMOT, a venture capital fund for early-stage start-up companies based on Institute discoveries. Maurice received an honorary PhD from the Institute in 2001 and Solo received one in 2009.

“Maurice would take phone calls related to Institute affairs from underwater if it were possible. He certainly always took them late at night and on his dinghy while on holiday − I know because I spent many holidays with him,” remarked Peter Stormonth Darling, a business colleague and close personal friend.

Dwek left behind his wife Janet, and two sons, Julian and Edward. In their philanthropy, Maurice (also known as Maurizio) and Janet always partnered with Solo and his wife Jeanette, and established, among other things, the Dwek Campus Center and the Solo Dwek and Maurizio Dwek Research School of Chemical Science. “Maurice did so much for us for so many years − the time devoted, the money contributed, the energy expended, and the love and care exhibited − and always so generously with an open mind and heart,” says Weizmann Institute President Prof. Daniel Zajfman.

“Maurice had an instinctive feel for the financial markets, and was one of the more outstanding bankers of his generation who shook up the banking industry in Switzerland,” said Darling, speaking at Dwek’s memorial service in London in November. “He had a well-developed sense of humor and was mischievous. He was a natural leader, a kind and intellectual individual, and always well-informed. He had a restless mind. He was optimistic, and an excellent judge of character. He had a tremendous gift for putting people at ease and was a gentleman with a warm heart and irresistible charm. He performed acts of kindness to others and at the same time was modest and self-deprecating; he never sought credit, and was intensely loyal to his friends and those who worked for him.”

A life of invention and reinvention

Maurice’s father, Murad, was one of seven siblings who all played a role in operating their father’s thriving textile business in Aleppo, Syria, in the early 1900s. When sea trade routes opened up, enabling faster and more effective shipping than land routes, Murad, a brother, and a sister relocated to Beirut. Four other brothers moved to port cities in the Middle East and Asia in an old-world version of corporate globalization. Murad married Adele de Picciotto; Solo was born in 1929 and Maurice in 1932. During his childhood, Maurice and his family often traveled at Passover to Palestine - crossing the border by car, stopping off to visit relatives in Haifa, and continuing a long and winding route through Nazareth to Jerusalem. In Jerusalem, they visited their paternal uncle, a doctor at Hadassah Hospital. “We were attached to Palestine ever since we were young because of these visits,” says Solo. When their mother fell ill, she traveled to her brother-in-law at Hadassah, and died in Jerusalem, at age 44. She is buried on the Mount of Olives. In Beirut, Maurice lived a life common to Jews of the Middle East in that era: closely tied to the Jewish community - attending an Alliance Israélite school - yet surrounded by Muslim and Christian friends and colleagues. After Alliance, Maurice attended a Christian school; their father’s two partners in his textile plant were Muslims. But co-existence came to an abrupt end in 1947 leading up to the establishment of the State of Israel, when riots broke out in Beirut. After an uncle was kidnapped for ransom and returned, Maurice’s father and uncle left for Europe, and Maurice and Solo followed shortly after, in early 1948. The plant was left intact, with the expectation that they would return. But huge strikes in the factory ensued because of its Jewish ownership. The Dweks never returned and the plant went out of business.

At age 14, Maurice closed one chapter of his childhood and started another. He and Solo attended a boarding school in Lausanne, and Maurice then joined his father in Paris, and continued with his studies. Solo later moved to Japan, but the brothers kept in touch. “No matter where we were, we were constantly in touch throughout our lives,” says Solo. Maurice got a job with Ufitec Bank in Zurich − previously Banque Zilkha, a bank whose roots went back to Beirut and Baghdad; Ufitec sent him to Montreal and New York to work and train in banking. Later, back in Zurich, Maurice met Gilbert de Botton who was also working at Ufitec. De Botton went on to become a world-famous banker and was a Weizmann Institute supporter and active Board member. He introduced Maurice to the Institute, in the late 1980s, and to then-President Prof. Haim Harari.

In 1972, Maurice left the bank and opened Soditic SA, a Geneva-based bank. Maurice “had fresh, new ideas for the Swiss market,” says Solo. “He became well known for imagining a new way of financing companies and he became highly successful.”

Over the next two decades, Soditic revolutionized the banking landscape in Switzerland, then the beating heart of the banking world. An article in the Financial Times after Dwek’s death credited him with having “toppled the cartel of domestic banks that had held sway over Swiss franc corporate bond issuance until well into the 1980s.” The “big three” as they were known − Credit Suisse, Swiss Bank Corp., and Union Bank of Switzerland − had controlled the lending market, but Dwek’s company offered innovative financial products that eventually drew big clients.

Soditic came to the attention of banking giant S.G. Warburg & Co., which acquired the company, becoming S.G. Warburg Suisse S.A. Later, in 1996, Dwek re-launched Soditic in London through partnerships with Citigroup and Mercury Asset Management, and repurchased the stakes of its previous minority shareholders. After his forced teenage relocation to Europe, notes Solo, Maurice re-invented himself all over again.

Above all, however, was his family. Maurice married Janet in 1973 and they had two boys, Julian - who is a member of the International Board - in 1974 and Edward in 1977. “The boys saw his example and they followed it,” says Janet, adding that they became banking interns in New York as early as age 16. “And his energy was enormous. I couldn’t keep up with his pace. He’d spend four days in the office and then he’d have to go somewhere.” Maurice made a point of involving his sons in his philanthropic interests in Israel, and brought them to Israel many times, and to the Weizmann campus. Beyond Weizmann, he and Solo generously support the Dana-Dwek Children’s Hospital at Tel Aviv Sourasky Medical Center (Ichilov), established by their paternal aunt.

“Maurice Dwek, of blessed memory, and his brother, Solo Dwek, adopted the Dana-Dwek Children’s Hospital in memory of their beloved aunt and uncle, Rene and Subhi Dana,” says Prof. Gabi Barabash, CEO of Tel Aviv Sourasky Medical Center. “After Rene’s passing, Maurice and Solo generously helped renovate and expand the hospital. Maurice was a wonderful, warm person and a true friend; we are grateful for the Dwek family’s commitment to the children treated at Dana-Dwek Children’s Hospital.”

“He encouraged me to attend the ISSI (the Dr. Bessie Lawrence International Summer Science Institute) in the early 1990s and I did,” says Julian, who resides in London, as does Edward. “It was one of the best summers of my life… My father relished his connection to Israel and the Institute, and he was in noticeably better spirits when he was at the Institute, ‘in the trenches’ dealing with Institute matters, or having just returned from a trip to the campus.” Maurice was the driving spirit and founder of PAMOT, the Institute's venture capital fund, which was launched in 1997. In coordination with YEDA, the Institute’s tech transfer arm, PAMOT creates start-up companies based on insights and technologies that have emerged from the Weizmann Institute, and nurtures them until the companies are able to attract major outside funding. Dwek understood the challenge of this particular stage of translating discoveries into real benefit for society.

At the same time, he understood the important separation between business and philanthropy, in which the latter places trust in the scientists and plays no part in the outcomes, notes Prof. Harari.

The Dwek family also established a fund to advance groundbreaking biomedical research, with a special focus on the fertility research of Prof. Nava Dekel of the Department of Biological Regulation. Throughout the years, the family, Solo and Jeanette in particular, developed a close relationship with Dekel. “Because of their support, my research and my work on a new fertility treatment protocol, which is now implemented around the world, was able to go full speed ahead, and for that I am forever grateful,” says Prof. Dekel.

Prof. Milko van der Boom, acting director of the Solo Dwek and Maurizio Dwek Research School of Chemical Science - one of the five research schools under the auspices of the Feinberg Graduate School - says the support of the Dwek family has “had a profound impact on graduate education in chemistry at the Weizmann Institute. It has enabled funding for a wide range of student needs and activities and altogether enriches the graduate education of chemistry students, thus building Israel’s future in this dynamic and important field that has so many implications for health and technology. We are grateful for his generosity and proud to be associated with his legacy.” In the final years of his life, Maurice expressed a wish to be buried in Israel, to be close to his mother’s final resting place. He is buried in the Kiryat Shaul Cemetery in Tel Aviv.

“Maurice was at home all over the world,” said Harari to dozens of friends and family who gathered to celebrate his life at the West London Synagogue. “For hundreds of years, the phenomenon was known as the ‘wandering Jew.’ Today it is called ‘globalization’. Maurice was Mr. Globalization. He spoke multiple languages and was a mix of multiple cultures - like a well-coordinated orchestra in one person. Maurice was also a great philanthropist who was particularly devoted to Israel. The Weizmann Institute caught his eye and captured his heart because it exists in Israel and is run by Israelis, and he understood that science has no nationality and contributes to the well-being of people everywhere.” 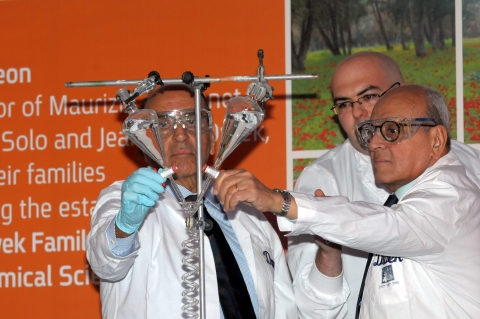