Pyroelectricity is the ability of polar materials to generate a temporary surface charge upon temperature change. As part of our studies on the conversion of nonpolar host crystals into polar pyroelectric mixed crystals, we discovered, surprisingly, that even the pure non-polar crystals exhibit pyroelectricity from their surfaces! In addition, our group had recently demonstrated that charged pyroelectric surfaces can either promote or inhibit ice nucleation.

Although ice melts at 0 °C, water can be super-cooled down to -40 °C without freezing in a clean environment. The ability to control the freezing temperature of super-cooled water with auxiliaries, which promote or suppress ice nucleation, provides a critical factor in a variety of areas such as the survival of ectothermic animals, cryopreservation of cells and tissues, prevention of the freezing of crops, cloud seeding and snowmaking. For decades, many researchers tried to understand what influences ice freezing.

Recent work done in our group found that positively charged pyroelectric surfaces promote ice nucleation. We think that positively charged crystalline surfaces might arrange the water molecules in such a way that will induce “ice-like” clusters in the water. We also found that by canceling the effect of the pyroelectric charge on the same surface, using a conductive paint, water will freeze at much lower temperatures. Our work provides insight into the mechanism of ice nucleation on polar and non-polar surfaces. 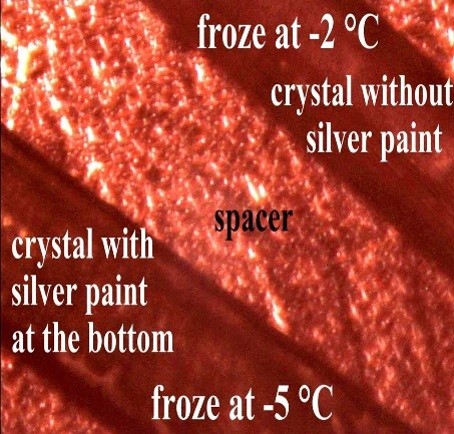 To further study the effects of the pyroelectric current on ice nucleation, we constructed a specialized device consisting of a pair of interdigitated electrodes covered with a protective dielectric layer. Using this device, we can control the electric field, surface charge and current in the water. We mimic what happens on pyroelectric surfaces and learn about the effects of the electric field, charge and current in the electrofreezing effect.

Until recently, the attention to the pyroelectric effect was related almost exclusively towards a large variety of applications, stretching from burglar alarms to portable high voltage generators. However, improvements in the measurement equipment, during the last decade, increased the sensitivity of the methods to detect pyroelectricity by at least 10,000 times. These improvements opened a prospect of using the pyroelectric measurements as an analytical technique.
In contrast to the common wisdom that only the polar crystals are pyroelectric, we have recently shown that some non-polar crystals display pyroelectric effect as well, due to formation of thin polar layers on their surfaces. In this view, observation of the surface pyroelectricity opened a new direction in the surface science. In addition, we have found that pyroelectric measurement can also be used for determining the structure and the polarization of doped polar domains in mixed crystals. Incorporation of dopants reduces the symmetry of the host and convert it into a polar crystal, which display pyroelectricity.