Approach outline. Given an initial generic model of the class object in a certain view (a), an object instance and its parts are detected in a dynamic scene at some time t0. The model continues to detect the parts for as long as possible, while adapting to novel views of the object at times t>t0 (b). The updated model is extended to cope also with general class object instances in novel views without external supervision (c).

We consider the task of visual recognition of objects and their parts in a dynamic environment, where the appearances, as well as the relative positions between parts, change over time. We start with a model of an object class learned from a limited set of view directions (such as side views of cars or airplanes). The algorithm is then given a video input which contains the object moving and changing its viewing direction. Our aim is to reliably detect the object as it changes beyond its known views, and use the dynamically changing views to extend the initial object model. To achieve this goal, we construct an object model at each time instant by combining two sources: consistency with the measured optical flow, together with similarity to the object model at an earlier time. We introduce a simple new way of updating the object model dynamically by combining approximate nearest neighbors search with kernel density estimation. Unlike tracking-by-detection methods that focus on tracking a specific object over time, we demonstrate how the proposed method can be used for learning, by extending the initial generic object model to cope with novel viewing directions, without further supervision. The results show that the adaptive combination of the initial model with even a single video sequence already provides useful generalization of the class model to novel views. 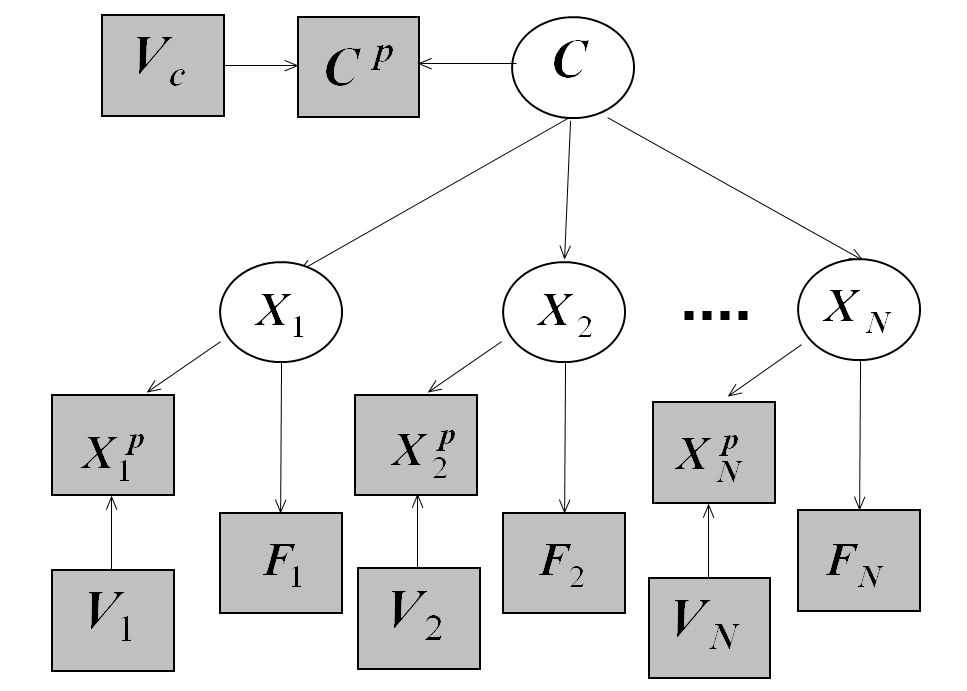 Probabilistic graphical representation of the adaptive model. Similar to the initial static model, the latent variables C and {X} represent the image locations of the object and its parts in the current frame. The observed appearance of the parts in the current frame is represented by {F} which are image features. Spatiotemporal information is represented by observed image positions of the object and its parts at the previous frame Cp and {Xp} respectively, and their measured velocities Vc and {V} respectively (derived from the optical flow between the frames).

Our adaptive model is initially a static, single-image parts detection model of an object class (such as cars or airplanes), with a star-like geometric structure. This model is learned from a limited set of view directions (such as side views). When applied to video sequences, the model acts as a standard static classifier on each frame until an instance of the object class is successfully detected at frame t0. The model is then applied to every two consecutive image frames t and (t+Δt) of the video sequence, as long as the object is reliably detected. Parts interpretation (identity and location) at time (t+Δt) is obtained by combining two sources: the model M(t) at time t, and the optical flow between the frames. The model is then updated to M(t+Δt) to be used in the subsequent frame. The updated model at each frame is an adapted instance of the initial model, based on the two corresponding views. We utilize adaptive approximate nearest neighbors (ANN) search, combined with statistical kernel density estimation (KDE), for efficient online updating of the model, using the dynamically changing views to extend the initial object model as described below.

Sample video sequences from our video dataset of cars and airplanes undergoing a change in their viewing direction.

Our algorithm first detects an object class instance in the video input based on its initial static model. Once the object is reliably detected by the initial model, our model is applied to every two consecutive frames of the input video sequence, while adapting to the dynamic changes in viewing directions of the object and its parts. Our online update algorithm is gradual in the sense that the adapted model combines the old and current parts appearances and object geometries. The mixture is obtained by adding the appearance and displacement from the current model to the ANN structure.

Our algorithm, when applied to dynamic visual input, adapts to changes in viewing directions of the object and extends the initial model to cope with novel views of the class object. In this experiment we show that the adaptive combination of the initial model with even a single video sequence already provides useful generalization of the class model to novel views. To evaluate the detection performance of the updated model, we tested the car model that was adapted to a turning car, on a set of car images seen from 3 different views: a side-view, roughly 30° view and about 60° view (Cornelis et al., 2006). Each image contains a different car instance, none of which was already observed by the model (neither during the training of the initial model, nor in the video sequences). For comparison, we also tested a state-of-the-art object detector by (Felzenszwalb et al., 2010), that was trained on side-view car images. The results in following graph show that the updated model generalizes to the new viewing directions of 30° and 60° without losing the performance on the initial side-view. 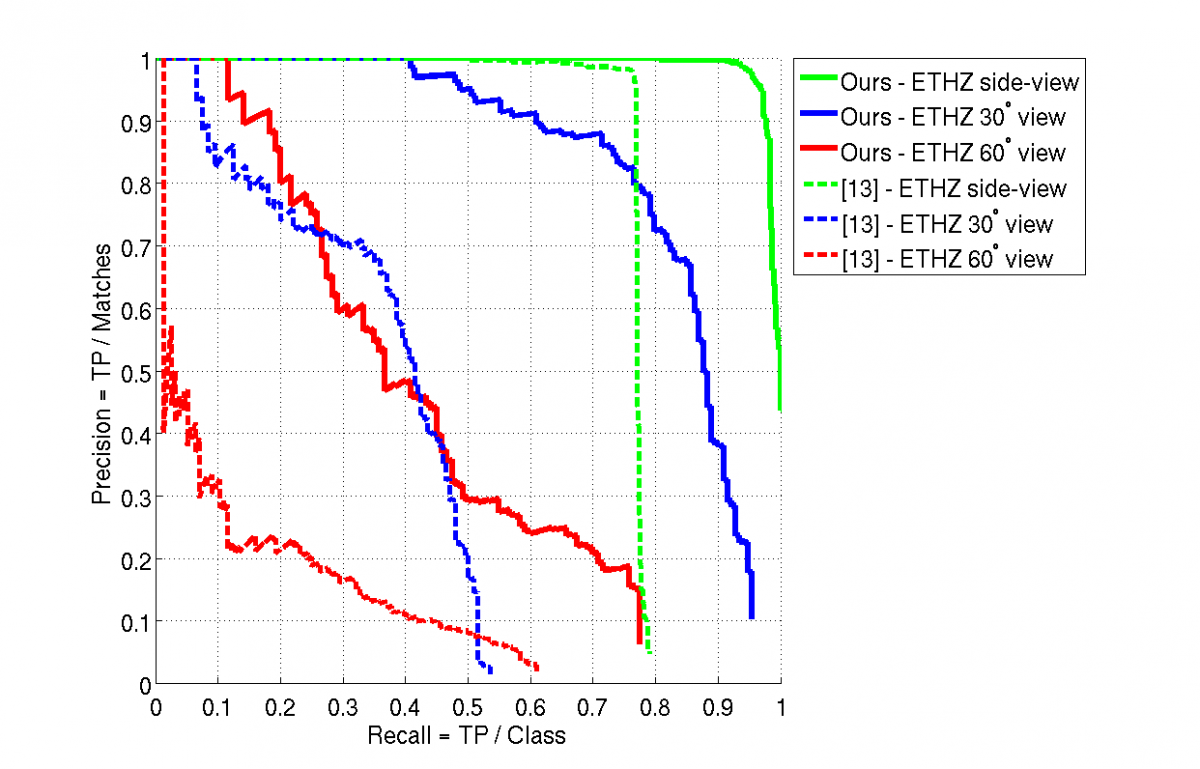 Learning novel views. Object detection precision-recall graphs for different views of cars. Shown in solid is the detection performance of our adaptive model after it was applied to a single video sequence of a turning car. The colors indicate the 3 views of car images from the ETHZ dataset (Cornelis et al., 2006) at side-view, 30° and 60°. The results show that the adapted model generalizes to the new views with high precision rates, while maintaining high precision-recall rates for the initial side-view. Dashed lines indicate for comparison the performance of a state-of-the-art detector by (Felzenszwalb et al., 2010) trained on side-view car images. 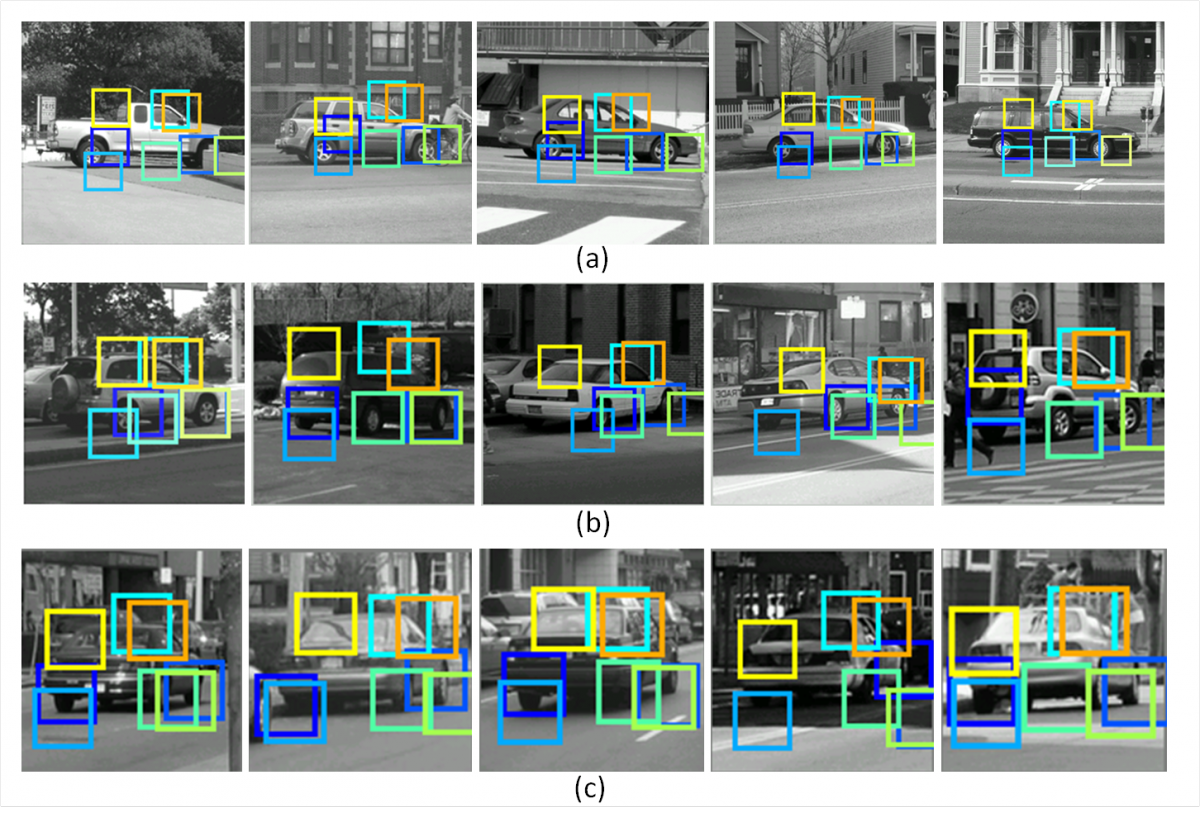 Parts detection examples of the adaptive model after it was applied to a single video sequence of a turning car. Car images are from the ETHZ dataset (Cornelis et al., 2006): (a) at side-view, (b) at 30° view, (c) at around 60° view.