The laser and its use

Properties of the laser beam

The term LASER stands for Light by Amplification Stimulated Emission of Radiation; that is, light amplification obtained from the process of forced emission of radiation. This process gives the laser beam two important qualities: coherence and monochromaticity.

The laser beam is a "light" beam with a defined color, sent in a defined and identified direction in space. The practical result is the ability to perform efficient work with a laser beam which cannot be performed (or is very difficult to do) with other light sources. When passing laser light through an optical lens, the rays passing through it are focused into a spot with a very small diameter onto a target located at the focal plane of the lens. The density of power (or energy) of the ray on the target is directly proportional to the power (or energy) of the light ray passing through the lens, and inversely proportional to the square of the focal diameter. Therefore, all components of the laser beam, having the same wavelength and lens impact angle, will be focused on the focal length defined for the lens. The practical result is that the focused power density will be much higher than what can be achieved from other light sources.

One of the features that distinguishes the laser beam from other light sources is its ability to emit extremely high power density (or energy). This feature is effectively applied to cutting materials, but it also makes the laser beam dangerous in the event of contact with the human body, especially the eyes.

The power density expresses the intensity of the power supply, and is measured in units of watts per square centimeter (W/cm2). A nominal 10 W laser beam can be focused into a tiny dot, only 0.2 mm in diameter, with a massive power density of 3∙104 W/cm2. Pulsed lasers can easily reach a power density (peak power within the pulse) in the range of 109 W/cm2 and even higher.

The nature of the laser beam

Laser radiation, in all its forms, belongs in the sphere of electromagnetic radiation, where the electric field and magnetic field propagate when they are coupled and orthogonal.

The laser systems with relevant applications produce radiation in the optical spectrum, including ultraviolet radiation, infrared radiation and the visible spectrum between them. 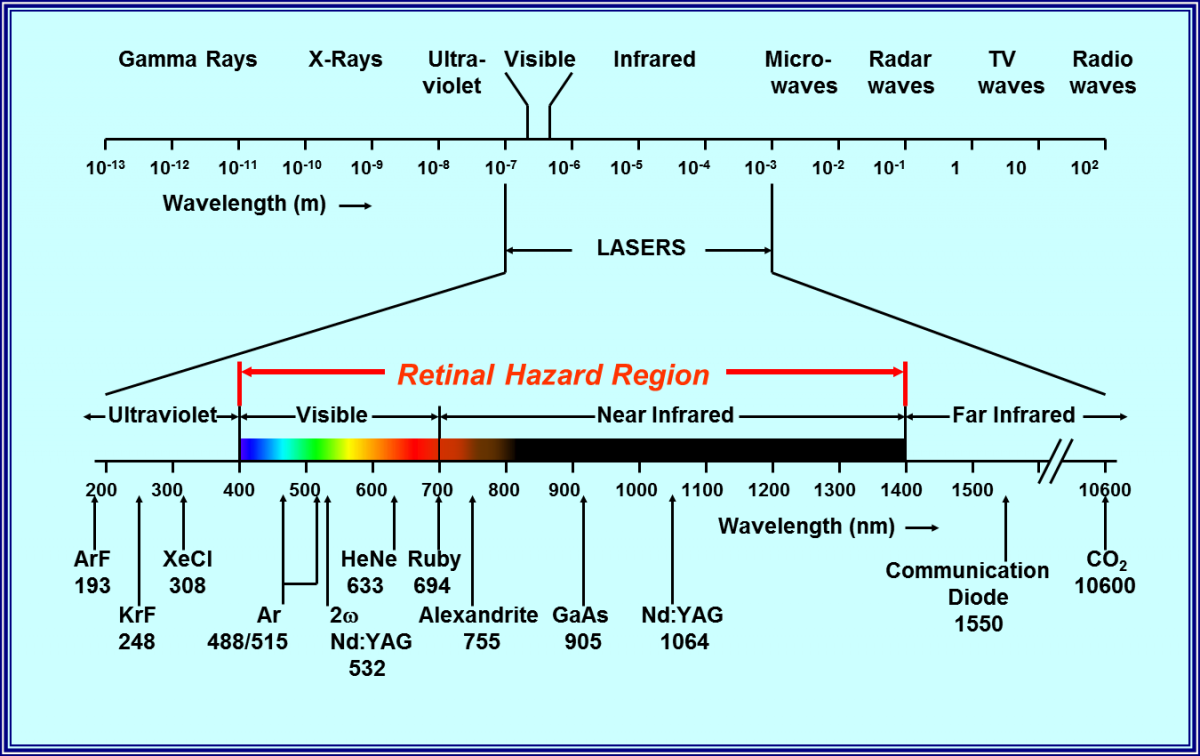 Ultraviolet (UV) radiation has the shortest wavelengths in the optical spectrum, from 400nm (near ultraviolet) to 10nm (deep ultraviolet).

Wavelengths in the visible spectrum range from 400nm (purple) to 700nm (red).

In the infrared spectrum, the wavelengths are longer, ranging from 700nm (near infrared) to 1mm (the limit of distant infrared).

The basic energy unit in the optical spectrum can be expressed via a light particle that is called a photon. The photon carries an energy value (a basic "radiation packet") that depends on its specific frequency (f).

This energy value (Ep) can be calculated by the following equation: Ep = h·f = h(c/l)

Where h represents the value 6.626x10-27 erg∙sec, known as the Planck constant (named after the physicist Max Planck).

The significance of this connection is that the energy contained in a photon increases as the photon’s oscillation frequency (f) increases. Similarly, it can be said that a photon’s energy increases as the wavelength (l) decreases. Photons in the ultraviolet range carry the most energy in the optical spectrum, and therefore, like IR light, pose serious potential risks requiring that safeguards be taken.

The wavelength is the primary parameter that distinguishes the various lasers and determines their application. Most lasers produce a beam characterized by a single wavelength, a function of the energy levels at the laser’s center. In the center of some lasers, conditions are created for the production of two wavelengths, and sometimes more. In addition, existing and other wavelengths can be obtained through harmonic multiplication (HG) and parametric oscillators (OPO).

Laser beams and optical components in the laboratory

The inherent risk of a laser beam stems from its capacity to produce an especially high power density. When a laser beam hits optical components, such as a lens or mirror, the characteristics of the beam may change, thereby affecting its direction and power density. Therefore, in assessing the laser beam’s risks, it is important to be aware of the changes in the ray’s properties due to optical components in the beam path.

The laser beam may contact with surfaces that block its progress in its original direction, diverting or scattering it in a different direction (or directions). The results of the contact between the laser beam and the surface depend on the laser beam’s wavelength and the nature of the surface. There are two types of reflection, Specular Reflection and Diffuse Reflection.

Specular reflection, in essence, a mirror image, is obtained when the reflecting surface is well polished, so that the size of the surface's irregularity is less than the laser beam’s wavelength. Typically, polishing is required to a degree of irregularity lower than l/4, i.e., approximately 0.15 mm for a laser beam in the visible spectrum. In the infrared spectrum, it is common to use polished metallic mirrors coated with a thin layer of silver or gold to improve reflection efficiency.

Diffuse reflection is obtained when the non-regularity of the reflecting surface is greater than the laser beam’s wavelength. For a laser beam in the visible spectrum, an irregularity of about 5 mm is sufficient to cause diffuse reflection. The reflected beam is scattered into the half space around the surface, with its intensity proportional to the cosine function.