Taking a global look at the PCD network, we have focused on two main issues: identifying inter-modular connectivity that mediates cross-talk and switches between cell death pathways, and understanding the significance of alternative death pathways and their integration into the network.

Recently we developed a powerful tool for analyzing the PCD network and novel pathway discovery that has become the basis for several exciting new directions in the lab. This is based on a protein-protein interaction (PPI) platform using the Protein-fragment Complementation Assay (PCA).

Principle of the Assay:

Two proteins are fused to either half of a luciferase reporter. When they interact, the two halves of the luciferase protein are brought into proximity and fold into the active enzyme. Thus luciferase activity is a quantitative read-out of the strength of interaction between the two proteins.

Using a comprehensive PCA library of PCD proteins fused to either Luc fragment, we generated a detailed PPI landscape of the apoptotic and autophagic modules and points-of-interface between them.

Applications of the Assay:

When a cell "decides" to die, it must choose among several death pathways, including the more common apoptosis and necroptosis, as well as several alternative death programs. For example, during prolonged starvation, autophagy is activated to counter the stress, but when that no longer suffices, the cell switches to the apoptosis pathway. Our goals are to understand the molecular switches that determine when and which death pathways are activated, and under what physiological circumstances they function.

Autophagy is a survival mechanism that often counters other death pathways. Whether or not autophagy can also be over-activated to the point where it kills the cell is more controversial.

We have addressed such questions as:

What are the morphologic characterizations of autophagic cell death (ACD)?

Using resveratrol treated lung cancer cells as a model for ACD, we have characterized a unique morphology that is consistent with over-consumption of cellular components leading to catastrophic internal membrane failure.

What converts autophagy into a mechanism that kills?

In a signalome-wide siRNA screen to identify genes that were necessary for resveratrol-induced death, we uncovered a novel pathway involving GBA, a lysosomal enzyme involved in ceramide metabolism, which in mutant form, leads to Gaucher Disease.

Identifying mechanisms of cell death during the cavitati 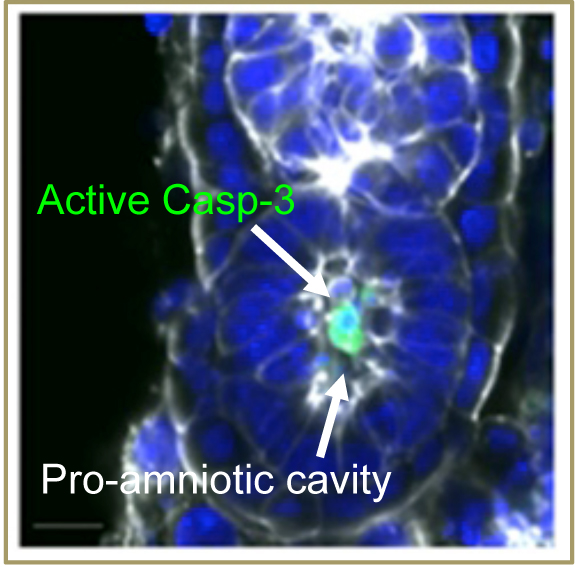 on stage in embryonic development

We are studying the cavitation process in the post-implantation mouse embryo. Using a combination of knock-out mice and in situ whole-mount embryos, we are evaluating the contribution of different cell death pathways to this developmental process.