All organisms produce a large repertoire of gene-encoded cationic antimicrobial peptides (AMPs), which serve to protect the host from microbial invasion. Most of these molecules directly kill bacteria by targeting and perforating the negatively charged membrane of the pathogen. In light of a worldwide emergence of drug-resistance bacterial pathogens, AMPs are promising therapeutic candidates.

Another property of AMPs is that they can bind and neutralize bacterial lipopolysaccharides which are potent activators of Toll-like receptors in different innate-immune cells. Their release to the blood is the primary cause of septic shock.

We combine biological and biophysical methods to understand:

Based on existing evidence that antimicrobial peptides can also kill cancer cells in vitro, we moved forward and de-novodesigned a diastereomeric peptide with high selectivity toward cancer cells and determined its mode of action. Most importantly, the peptide was highly potent in animal models of primary and metastatic tumors when injected intratumor or intravenously (the first reported study). In contrast, the same peptide, but composed of all L-amino acids, was highly active only in vitro and could not discriminate between tumor and non-tumor cells. 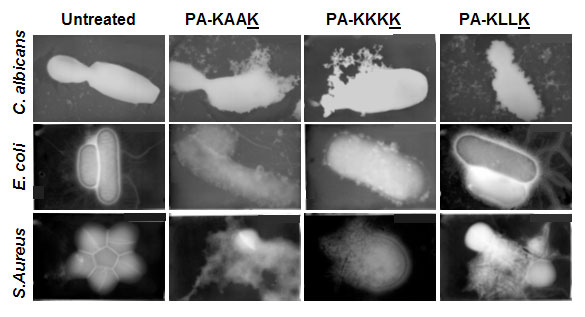