But as Alexander Fleming, discoverer of penicillin, noted in his Nobel Prize acceptance speech, even the best antibiotics can become ineffective over time. With improper prescribing of antibiotic medication triggering selective survival of resistant strains, resistance is a growing worldwide problem.

It’s a problem that many scientists have been working to solve. The Weizmann Institute’s Prof. Ada Yonath of the Department of Structural Biology was awarded the Nobel Prize for her mapping of the ribosome, the cell’s protein factory. Her discovery has major implications for solving antibiotic resistance, because certain antibiotics eliminate pathogenic bacteria by binding to ribosomes, preventing them from producing crucial proteins.

Now, Institute scientists have created a new method for identifying the molecular mechanisms that allow bacteria to thrive, even in the presence of therapeutic levels of medication.

Prof. Rotem Sorek of the Department of Molecular Genetics has developed a high-throughput approach to the discovery of factors that regulate bacterial gene expression - specifically, those genes that, in their active state, contribute to antibiotic resistance. His findings were published in Science in April.

Prof. Sorek looked at riboregulators—RNA elements that, in the presence of specific molecules, trigger the premature termination of protein production. “We found a way to identify riboregulators on the genome-wide scale in a living cell. We can measure the activity of many of these riboregulators in parallel, and we can screen for ones that respond to antibiotics.” Using this method, his team detected a number of riboregulators that control the activation of genes involved in antibiotic resistance. These findings allowed them to identify not only known, but also novel, genes involved - results which may lead to new therapeutic strategies.

So far, Prof. Sorek has used the platform to detect numerous factors involved in the regulation of antibiotic-resistance genes, both in pathogenic bacteria and in bacteria collected from a much friendlier source - his own lab members’ teeth. He believes that he and his colleagues will continue to smile - and not just in order to provide additional bacterial samples. “Our approach opens the door to identifying the genes used by bacteria to resist antibiotics. We hope to develop means to inhibit these genes, so that antibiotic medications can do their job.” 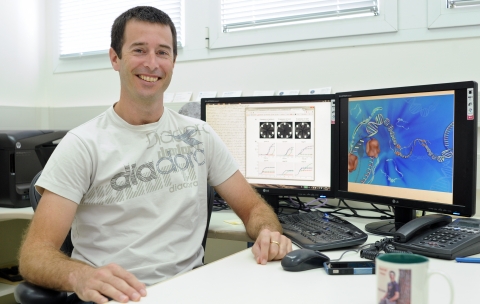