Materials of the sea

Dr. Assaf Gal is entranced by the complex beauty of the delicate shells created by mineralizing marine algae.

“The minerals that simple unicellular organisms form out of seawater outperform any man-made synthetic material, and we want to know how they do it,” says Dr. Gal, whose research has implications for global warming, medicine, and beyond.

Coccolithophores—a dominant family of marine algae—build their elaborate structures from calcium carbonate, while diatoms, another common algae, create their geometric wonders out of silica. These two families of unicellular organisms play a pivotal role in the marine ecosystem and together they carry out nearly half of the planet's total photosynthesis. They also have a critical role in the global carbon cycle and are the building blocks of sedimentary rocks formed by ancient seas.

Dr. Gal, of the Department of Plant and Environmental Sciences, is especially intrigued with trying to understand how these minute creatures can build such exactly ordered and complex structures. The biomineralization process—the hardening or stiffening of minerals—involves exquisite biological control over the formation of crystals and the growth of shells or bones. However, trying to follow the biomineralization process in living cells is highly challenging since the biochemical events often occur within cells, and standard imaging and analytical techniques are incompatible with the study of the unstable, soluble, and short-lived mineral phases that occur along the way.

Dr. Gal is taking advantage of the rapid development of new molecular biology tools and improved in vivo imaging capabilities. Using powerful electron microscopes, he follows the cellular pathways that lead to the accumulation of calcium in coccolithophores and silicon in diatoms. During his postdoctoral research at the Max-Planck Institute in Germany, he discovered a previously overlooked organelle where calcium is stored in intracellular reservoirs in coccolithophores. This intermediary step helped fill one of the gaps in understanding how these single-celled algae convert seawater into elaborate mineral structures.

Many global warming studies focus on the colorful coral reefs, but compared to marine algae, these reefs form only a tiny part of the ocean’s ecosystem. Dr. Gal says that "understanding the effects of warming or acidification on diatoms and coccolithophores may yield even more important insights." These are some of the challenges he plans to work on in his new lab at the Weizmann Institute.

Beyond the intrinsic beauty and global role diatoms play in the ecosystem, scientists are beginning to find new applications for these bio-engineered silica structures. For instance, encapsulating an enzyme or drug into a diatom shell can create a very stable drug delivery system that is cheap to produce. Meanwhile, chemists are also starting to investigate complex silica and calcium carbonate structures as mesoporous surfaces (containing pores of 2 to 50 nm in diameter) on which to conduct very efficient catalytic reactions. Biomineral structures are also being explored for their optical and electrochemical properties.

He won several departmental awards for excellence as an undergraduate at Ben-Gurion University. He was awarded a Clore Foundation fellowship for excellent PhD students from 2011 to 2014 and was invited as a student to attend the 63rd Lindau Nobel Laureate Meeting in 2013. Upon graduation, he was awarded the Shimon Reich Memorial Prize of Excellence awarded by the Feinberg Graduate School at the Weizmann Institute. Dr. Gal was awarded an Alexander von Humboldt Postdoctoral Research Fellowship in 2015 and 2016. 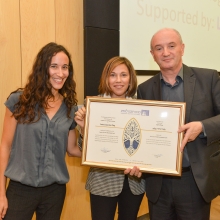 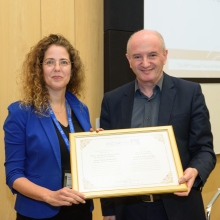 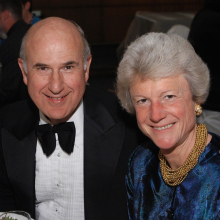 From bench to (pediatric) bedside

In December, a celebratory summit took place between Weizmann biomedical researchers and their colleagues at the Schneider Children’s  Medical Center in Israel — one of the world’s leading children’s hospitals.