Dr. Filipe Natalio grew up near the beach, and has been riding a wave of water-related discoveries ever since. How then did this investigator—who earned his doctorate at the University of Mainz, Germany, and also trained in Italy, China, and the Netherlands, as well as his native Portugal—become fascinated with the dry stone tools left behind by our prehistoric, desert-dwelling ancestors? As befits any introduction to a new member of the Weizmann Institute’s Scientific Archaeology Unit, getting to the answer to this question requires a bit of digging.

Dr. Natalio studies prehistoric stone tools—treasures of the land that may elucidate the behavior of species, like homo erectus, that pre-dated modern humans. But he began his career studying treasures of the sea: marine sponges. His work focused on spicules—microscopic fibers that give deep-sea sponges strength and flexibility, and have unique optical properties. “These needle-like fibers,” he says, “are a window into 600 million years of evolution.”

Taking a cue from nature—but working at a somewhat faster pace—Dr. Natalio was a postdoc when he used sponge proteins to synthesize self-assembling spicules that were strong and flexible enough to use as optical waveguides. This work followed another nature-inspired achievement, in which nanoparticles of Dr. Natalio’s design provided an environmentally friendly solution to a difficult maritime challenge: biofouling.

Marine biofouling is the colonization of microorganisms on surfaces directly exposed to seawater, like ships’ hulls. Biofouling leads to increased drag, which, in turn, causes an expensive increase in fuel consumption. With his postdoctoral advisor, Dr. Natalio designed a nanoparticle-enriched paint that prevents biofouling by triggering a bleaching process on the hull surface. This approach, now patented, is being developed for market by the German chemical company BASF.

Nanotechnology and water are central to another, more current, investigation of his: the use of plants as “factories” for manufacturing novel materials. Growing cotton plants in water, Dr. Natalio has demonstrated how nanoparticles can endow plants with different colors, or even properties like fluorescence and magnetism—without genetic modification, using natural biochemical pathways that evolved over thousands of years.

This juncture between plant science and materials helps explain Dr. Natalio’s career shift, toward a focus on the ancient world. Inspired by his love of water—as well as the work of his brother, an archaeologist—Dr. Natalio traveled to the Amazon River to examine how, 5,000 years ago, precolonial societies incorporated spicules—in this case tree sponge needles—into the clay used for fashioning pots, thereby producing ceramics with superior mechanical properties.

“New technologies not only help people—they change behavior,” says Dr. Natalio. “Amazonian potters were the first known to employ biological materials to generate composites with enhanced fracture resistance and high stiffness. It’s fascinating to see how this technology, which spread from the riverbed to communities further inland, changed how people lived.”

Joining the Weizmann Institute—first as a visiting scientist, then, as a faculty member—has changed Dr. Natalio’s life, as well as that of his wife, who has joined the Department of Structural Biology as a postdoctoral researcher. Dr. Natalio was recruited to the Kimmel Center for Archaeological Science by its founding director, Prof. Steve Weiner.

“With his knowledge of chemistry, materials science and biology, as well as the fact that he had carried out some fascinating archaeological research, I recognized that Filipe could be an excellent candidate for the Kimmel Center,” Prof. Weiner says. Prof. Elisabetta Boaretto now heads the Center.

“Stone tools are amazingly interesting,” Dr. Natalio says, while shifting the substantial weight of a 1.2-million-year old flint hand-axe from one palm to the other. “It’s hard enough to explain human behavior when the humans we’re studying are alive. Solving the behavior of our long-dead, human-like ancestors—now that’s a challenge!”

Dr. Filipe Natalio is supported by the Estate of Olga Klein Astrachan, the Benoziyo Endowment Fund for the Advancement of Science, and the Helen and Martin Kimmel Center for Archaeological Science. 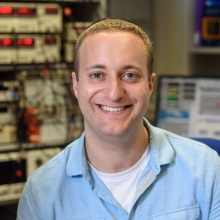 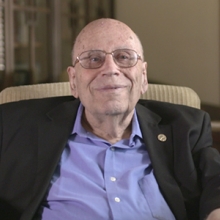 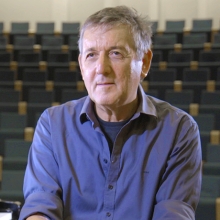 Yoni Rechter is one of Israel's leading musicians, a versatile composer, gifted performer of wide acclaim and popularity, producer, and arranger.