A special connection through history

Sy Hecker’s presence in Tel Aviv upon the establishment of the State of Israel in May 1948, at age 18, and his first visit to the Weizmann Institute of Science shortly thereafter are intricately entwined moments that are imprinted on his memory.

They also set in motion a lifetime of commitment, and recently, generous philanthropy to the Weizmann Institute, together with Bob Yocum, his partner, with whom he lives in Miami.

In reality, the story starts even before that—in 1935. That was the year that Sy’s grandparents, who lived in Buffalo, New York, traveled to Europe and Egypt. In Egypt, they met a Jewish man from Palestine who told them about a small Bauhaus-style apartment building in Tel Aviv that might be worth purchasing. His grandfather was in the real estate business and was always looking for a good deal. The couple traveled to Tel Aviv and made an offer—$25,000—on the 16-apartment building on Allenby Street, not far from the landmark Great Synagogue. They sent a telegram to their son, Sy’s father, in Buffalo, asking for a wire transfer.

“At first, my father didn’t want to send the money because he thought they were kidnapped and he was being asked for ransom money,” laughs Sy. But the purchase happened soon enough, and his grandparents sold off the apartments and kept one for themselves, a second home in which they spent their winters to escape from the cold of Upstate New York.

Sy, who was born in 1929, visited them often. In preparation for a visit in 1947, he obtained a visa from the British consulate in Buffalo; when his flight stopped over in Paris on November 29, the U.N. announced its partition plan: the British would withdraw, and the land between the Jordan River and the Mediterranean would be divided into two states, one Jewish and one Arab. With tickets bearing the destination “Palestine,” he landed in the nascent state of Israel, where he witnessed triumph and celebration. “I watched the parade from our balcony on Allenby Street. It was so emotional. We were all in tears, so proud. Today, when I think about it, I feel that I was so lucky to have seen everything in the making,” says Mr. Hecker.

He spent 10 months in Israel and traveled all over the newborn country. He returned again in 1949, when he visited the Weizmann Institute, which had just been established and consisted of just a handful of buildings. One of them, the Ziv Building, housed the chemistry lab of Dr. Chaim Weizmann; another, Ziskind, housed WEIZAC, the first computer in the Middle East. WEIZAC—which still sits in Ziskind today and takes up an entire wall—made an impression on him, as did “seeing a research institution springing up from the ground, almost from nothing, while the country was just starting,” he said.

“I saw that even from the very first days, Israel made science and medicine a top priority,” he continued. “The president of the country was also the founder of a scientific institution, which was an incredible thing to me… And while I wasn’t a scientist, what mattered to me was the emphasis on bettering humanity.”

A photographer snapped a picture of Sy and his uncle on the steps of the Ziskind Building that year, and when Sy and Bob visited the Institute in 2008—nearly 50 years later—they had a photograph taken in the same spot.

“When I met Sy more than 20 years later [in 1971], his early visits to Israel and the one to the Weizmann Institute were still present in his mind,” says Bob. "They had made a deep and lasting impression on him. And through his emotional connection, I developed an emotional connection. Throughout the years, as illnesses occurred among family and friends, the thought was always in our minds: ‘What if there could have been knowledge that could have helped them, or saved them?’ This is why we support Weizmann.” 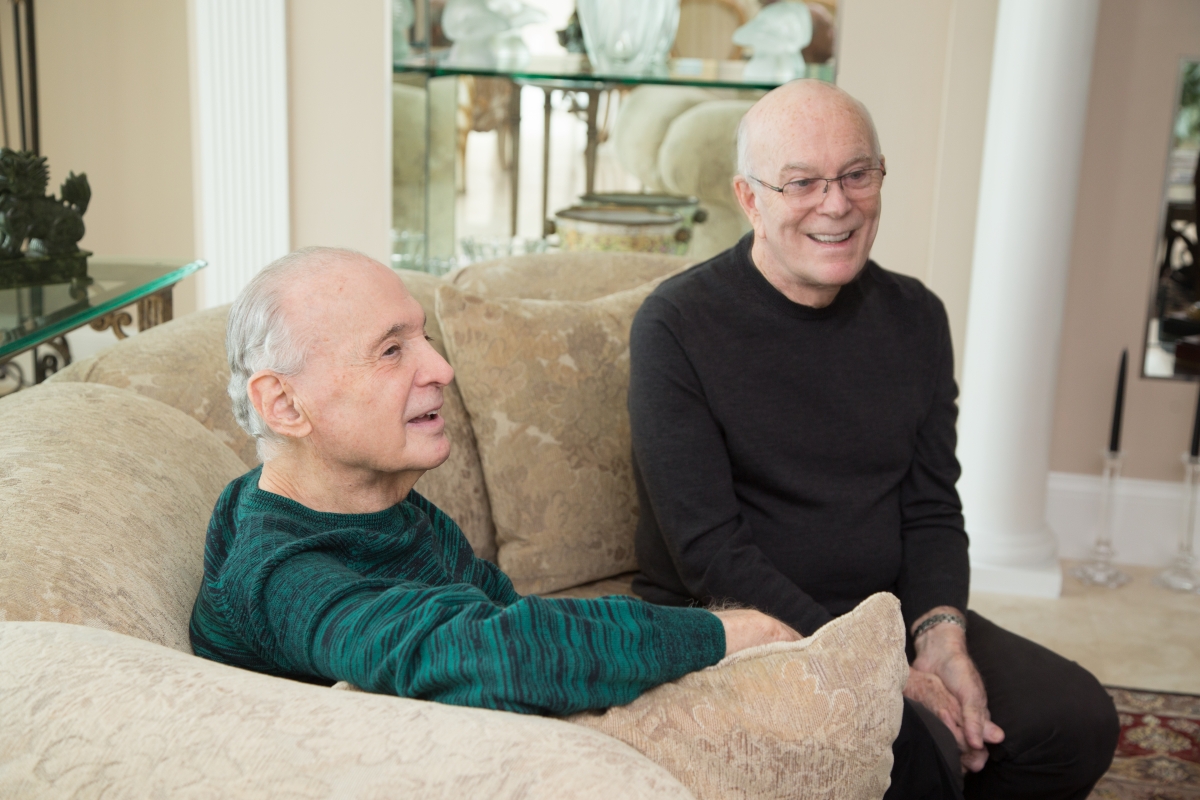 “He’s a guten neshama,” says Sy, using the Yiddish word for ‘good soul’ to describe his partner. Says Bob: "And each day we’ve been together, he has made me a better person.”

In 2008, the duo gave their first major gift to the Institute, for scholarships at the Feinberg Graduate School. Most recently, the couple made a testamentary gift to the Weizmann Institute involving a pledge of 95 percent of their assets, which they have also earmarked for scholarships. The men have met nearly every Institute scientist who has given talks in South Florida.

“Every time we meet a scientist, it is mind-boggling,” says Bob. “The substance and importance of their work encircle you and become part of your thought process, and you want to be part of it.”

Sy, 87, and Bob, 73, met 46 years ago, at the lunch counter of a Miami restaurant, shortly after Bob moved to the city. Mr. Yocum had relocated from his native Texas as part of a team opening the first Neiman Marcus store in Florida. Sy was in the real estate business; he owned several motels on what was once referred to as Miami Beach’s “strip”, the length of the shore that drew sun-seeking tourists, particularly in the winter months. Today, the area is populated with upscale residential high-rises and luxury hotels. Looking out from their balcony, they can see the breathtaking views of that area and reminisce about what it used to look like.

Bob grew up in a small rural town called Levelland in north Texas— “all cotton and all wheat,” he says. And religion. Without mincing words, the pastor of his church told Bob that, because of his sexual orientation, he was barred from the church. As a youngster, he felt alienated from his family, and his community. “I had no expectations for myself, because, I think, no one else did… And growing up in the Bible Belt, I didn’t want to have anything to do with organized religion,” Bob recalls.

Soon after meeting each other, Sy took him to his synagogue in Miami Beach. The rabbi’s speech resonated with Bob and was the trigger that changed his worldview about religion. “The rabbi gave such a meaningful speech. It wasn’t hate-filled or judgmental. It was about living your life to be a good person, doing charity, doing good for others, being honest and keeping your integrity,” he recalls. “I thought: ‘All along, this is what I thought religion should be.’ It was a perfect connection for me.”

He continued, “We shared a passion for music, art, and opera, but Judaism created a spiritual connection between us. It sealed the deal,” Bob says. “It has grounded us and pointed us to who we are today; how we wanted to live.” He later converted to Judaism. They are still active in their synagogue today.

Sy’s family accepted him, he says, “and his mother even taught me Yiddish. I can speak a little—in a Texas drawl.” After gay marriage was approved in Canada, they got married in 2006; and then again, in New York City, in 2013. They traveled the world together; a first order of business in every new city was to find a synagogue, and either attend a service or to wander around inside. “We’ve been everywhere we’ve wanted to go, including a survival trip down the Amazon River,” says Bob. They were in Israel together a handful of times.

Eventually, Bob left Neiman Marcus and became a real estate appraiser, and the two formed their own upscale housing construction company, S&B Design. They refurbish properties or build them from scratch, often living in them for a short time until they are sold. They found their current apartment—with breathtaking views of the Atlantic Ocean and the Intracoastal Waterway—through their work, overhauling it completely. Today it is decorated with art they have collected from their many trips around the world.

“We feel very privileged that we have been successful financially, and that we have been able to act on that in a meaningful way with Weizmann,” says Bob. “For us, Weizmann was the right place. It has been so cemented in who we are, and we know we have made the right decision. We feel so blessed to be able to do it. It is validation for our lives.”

Taken together, their annuity and their testamentary pledge will fund dozens of scholarships for masters and doctoral students. “We want to allow for knowledge to be incorporated on campus, to develop minds that will become the scientists in the lab,” says Sy. “We love the fact that Weizmann doesn’t charge its students tuition, and we know this money has to come from somewhere."

Last year, Sy became ill with cancer and their travel ground to a halt. In January, he was was pronounced cancer-free and is looking forward to his doctor’s approval for him to travel again. His travel bug is back, he admits. “I want to make one more trip to the Weizmann Institute,” he says.

Students at the Feinberg School study tuition-free in English and receive a living stipend, freeing them to focus on their studies and research. In a hands-on learning atmosphere that favors interdisciplinary collaboration, FGS students are often first authors on scientific publications that result from research in the labs in which they work. The School, located in the David Lopatie Hall of Graduate Studies, and its five affiliated research schools, awards 140 MSc degrees and 140 PhD degrees annually; about 500 new students and postdocs join the Institute every year, including a large contingent of international students. 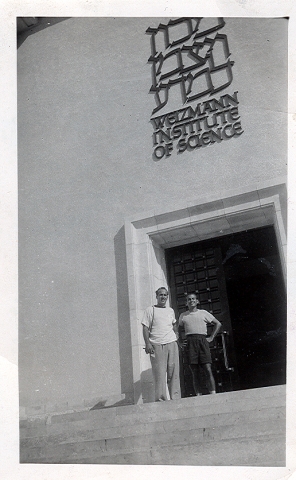 Sy and his uncle in 1949 in front of the Ziskind Building. 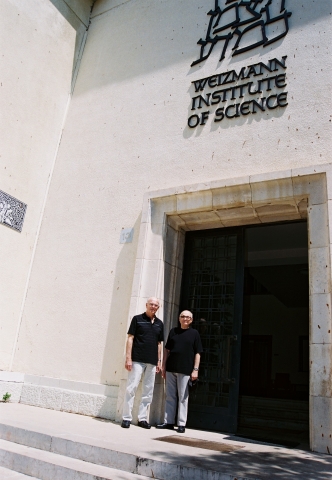 Sy and Bob in the same spot 50 years later. 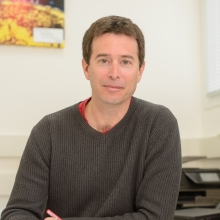 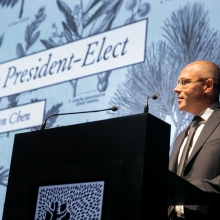 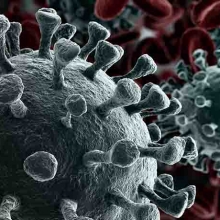