Judy and David Dangoor are ensuring science informs our past

Dr. Judy and David Dangoor at the Global Gathering in London in June

Archaeology isn’t what it used to be anymore.

In their work learning about key events in time and refining the chronological record, archaeologists have relied mainly on a keen and educated eye to elucidate past events and place them in time. Today, however, a new brand of archaeology - one that integrates scientific analysis, including tools from chemistry, physics and biology, with traditional techniques - is emerging, and Weizmann Institute scientists are leading the way.

Advanced infrastructure is a key factor in propelling Weizmann Institute scientists' study of the past into the future. Particularly important is a relatively new piece of equipment called the Dangoor-Research Accelerator Mass Spectrometer (D-REAMS). Inaugurated in 2013, the D-REAMS Laboratory was made possible thanks to a major gift by Dr. Judy and David Dangoor of London and the Exilarch’s Foundation, established by David’s father, Sir Naim Dangoor. The D-REAMS Lab is headed by Dr. Elisabetta Boaretto and is already leading to discoveries that were never before possible. While many AMS laboratories exist elsewhere in the world, D-REAMS is the first AMS laboratory in the world to be used only for research rather than acting as a service provider. The technology leverages the unique science-based approach pioneered by Weizmann Institute scientists during excavation and has resulted in numerous key findings and increasingly precise dating (see below).

“For us, helping establish D-REAMS was the perfect opportunity to deepen our commitment to preserving historical narrative and at the same time helping advance scientific research,” says David Dangoor. “Archaeology is not an area where scientific rigor has been applied for the most part, but the Weizmann Institute is helping change that by doing evidence-based research - using the scientific method of trying to disprove a theory rather than trying to assert a theory, which is the way archaeological research is often done.”

It was a perfect fusion of history and science, two areas that they personify: Judy Dangoor is a scientist by training - she obtained a PhD in photosynthesis at Imperial College - and David’s family has been deeply involved in ensuring the preservation of the historical narrative of the Jews of Iraq, where he lived himself and attended primary school until moving to the UK in 1960.

At age eight in Baghdad, David began a stamp collection by ordering a batch from abroad. After excitedly receiving the package in the mail, he came across a stamp from a country he’d never heard of: Israel. He asked his father what it was. David recalls, “He asked me, ‘Where did you get this?’ and I told him. He asked me to give it to him and told me not to talk about it… That indicates the extent to which adults had to shield the Jewish children in Iraq from the politics, anti-Semitism, and anti-Israel sentiment.” Two years later, when David was 10, the family moved to London.

The Dangoors were a prominent family in Baghdad at a time when Jews comprised 40 percent of the city’s population. David’s grandfather, Eliahou, was the largest printer of Arabic books in Iraq. His great-grandfather, Hakham Ezra Reuben Dangoor, was Baghdad’s chief rabbi. Naim owned multiple businesses and the Iraqi franchise for Coca-Cola. When the majority of Jews left Iraq for the nascent state of Israel between 1949 and 1952, the Dangoors stayed; they had too much to lose. But eventually Naim brought his family to the UK and when the Ba’ath Party passed a law in 1963 placing major business restrictions on Jews, he also left. It meant leaving all his assets behind.

“My father was 50 years old when he arrived in London, and he had to start from scratch,” says David. “He rebuilt, together with us, his four sons. My father was forever grateful to England for allowing us the opportunity to rebuild. And this gratiutude became the source of his philanthropy.”

The Exilarch Foundation is the largest private supporter of the Francis Crick Institute, a new biomedical research institution in London, and David and Judy support a variety of other UK causes, including Westminster Academy in London, where many of the students are immigrants from Muslim countries.

In Israel, the Foundation established the Sir Dr. Naim Dangoor Program for Universal Monotheism at Bar- Ilan University during Naim’s lifetime, and it made a major gift recently to establish the Dangoor Centre for Personalised Medicine, part of Bar-Ilan University’s medical school in Tzfat, which was inaugurated earlier this year. They also support the annual Anglo- Israel Cardiology Symposium, which brings together cardiologists from the UK and Israel.

As frequent visitors to Israel, they now have a house in Herzliya. They have four children and four grandchildren. “With six trips to Israel last year alone, it was about time to fulfill our dream of having a house in Israel,” says David.

The Dangoors have since become committed to another aspect of science: communicating its relevance and importance to the public. For this reason, they stepped forward as the lead sponsors of the Institute’s Global Gathering that took place in London in early June. “The Global Gathering is a chance for people in the UK to see what the Weizmann Institute is all about,” says David. “The Weizmann Institute is a fantastic brand and it should get maximum exposure, and the Global Gathering reflects a drive by the Institute to share what it is doing with others. That’s a wonderful quality. Moreover, the UK is where the Weizmann started, with the Sieff, Wolfson, and Clore families. To be associated with these families makes us very proud.”

Adds Judy: “Science knows no boundaries; it is a collaborative effort across all peoples and persuasions. We feel it is very important to engage non-scientists with science… Israel should be supremely proud of Weizmann and its other research institutions because they have made major contributions. Let’s let the world know.”

Archaeology is about the reconstruction of past human behavior based on the materials that have withstood the ravages of time. The Weizmann Institute has the advantage of being located in an area with a copious archaeological record. After all, Israel sits at the crossroads between Africa, Europe, and Asia and it was in this narrow strip between sea and desert that hominids first came out of Africa more than a million years ago, gathered into villages 14,000 years ago, and developed agriculture 10,000 years ago.

Prof. Stephen Weiner of the Department of Structural Biology was an early leader in the field that he dubbed “microarchaeology” - the elucidation of the microscopic record of artifacts using scientific tools. He advanced an integrated approach that starts at the excavation itself using an on-site laboratory. This work has been enabled by the Weizmann Institute-Max Planck Society Center for Integrative Archaeology and Anthropology, which Prof. Weiner co-directs, and the Helen and Martin Kimmel Center for Archaeological Science, which he heads.

A new era in research

Until the establishment of the D-REAMS Lab, Dr. Elisabetta Boaretto of the Scientific Archaeology Unit - who integrates the microarchaeological approach into her own research program in archaeological science - had to send samples abroad for radiocarbon dating; the results would often take many months to arrive, inhibiting the pace of research. “Now, we can take samples straight from the field, where we know exactly where they come from, into the lab, and have results in days,” says Dr. Boaretto.

Radiocarbon techniques allow archaeologists to date samples going back to 10,000 years ago with a precision range of about 50 years. The AMS technology enables more precise dating going back 50,000 years and also makes it possible to measure the amount of radiocarbon in a milligram or so of sample. This is extraordinary, because for every radiocarbon atom in a given sample there are around a trillion regular carbon atoms.

“In other words,” says Dr. Boaretto, “this is like making a pile of white paper from the Earth to the moon with only one colored paper in it, and the machine will find the colored paper.”

The D-REAMS machine opens up enormous possibilities for documenting the spread of new materials and technologies and reconstructing trade routes. Her team has made several important discoveries since the machine's installation:

Says Dr. Boaretto: “The AMS machine opens up many new research opportunities for us to investigate, for example how olive trees, an important component of the local archaeological record, could be a valuable archive for past climate. Such questions require the integration of science and archaeology, and all this starts in the field and progresses to the laboratory. This approach attracts the best scientists, postdocs, and students - people who want to come to Israel to do archaeological research, and who are well trained in the natural sciences and archaeology. We can now say to them: ‘You will have all the most sophisticated tools at your fingertips to do your research at the highest level.’”

“Archaeology is a subject that is common to all of the Middle East. For us, it is an opportunity for nonpolitical cooperation,” says David Dangoor, adding that the cooperation with Max Planck adds another positive dimension because the Dangoors are major advocates of nourishing cooperation between Israeli scientists and scientists from other countries.

“Understanding of the past throws a lot of light on the present,” says Judy Dangoor. “D-REAMS introduces the potential to develop a rigorous chronology of historical eras. I’m always fascinated with how and when and why humans moved out of Africa and the fact that the rest of the world population ostensibly is derived from that group. And it wasn’t so long ago. It is very sobering how we’re all very much connected to each other.”

Elisabetta Boaretto is funded by the Dangoor Accelerator Mass Spectrometer. 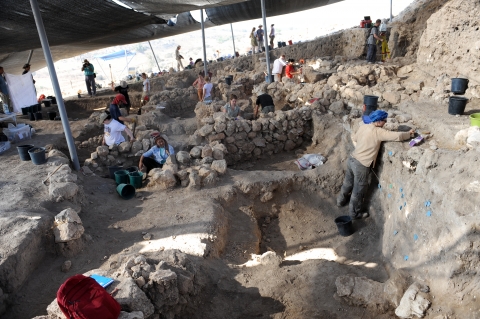 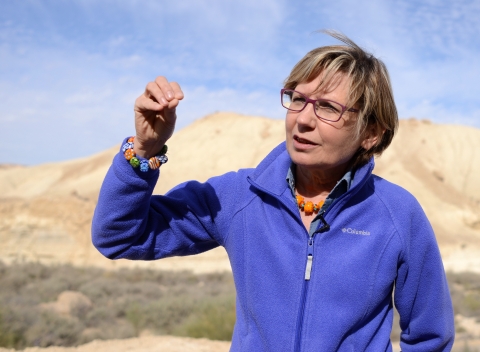 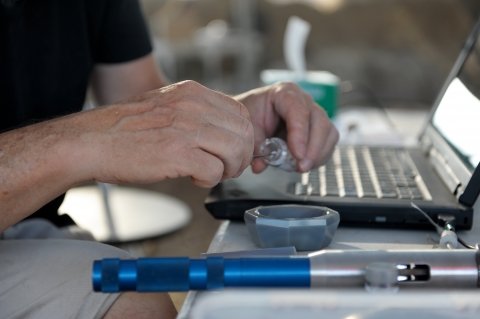 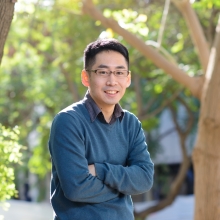 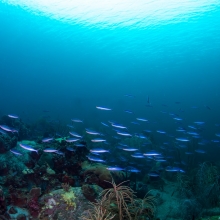 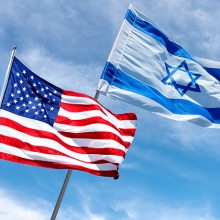