The Closing Gala, held at the Hilton Tel Aviv Ballroom, was dedicated to science education for youth, teachers, and the public, highlighting the successes of the Davidson Institute of Science Education. The event honored Prof. Haim Harari, Chairman of the Davidson Institute (pictured below), who retired from that role; Prof. Harari, a member of the Faculty of Physics, served as President of the Weizmann Institute between 1988 and 2001.

“We are keenly aware that science literacy is not just about doing science homework and taking tests,” said Karen Davidson, whose late husband Bill established the Davidson Institute; at the event, she announced the Davidson Foundation's most recent gift, which supports the upgrading of a new Davidson Institute website. “It's about science becoming part of our lives - for personal advancement and self-efficacy; for informed decision making; in addition to paving the way for new discoveries … We make this gift out of gratitude for our friendship with Haim and with this special place.”

Prof. Harari said, “If knowledge and wisdom are the most sought-after commodities in the world, then their creation - which is education - is the best investment in the world.”

The Maurice M. Dwek Rose Garden was dedicated in a ceremony on Nov. 9, a gift to the Dwek family from the Weizmann Institute of Science in recognition of Maurice’s close friendship with and support for the Institute over many years. The Garden is located in a quiet, shady corner of Jubilee Plaza, in clear view of the Dwek Campus Center which Maurice and his wife Janet established together with his brother Solo and his wife Jeanette, in addition to many other gifts to the Institute. Pictured L to R: Denitza Roussinova, Jeantte Dwek, Marco Dwek, Edward Dwek, Julian Dwek, Solo Dwek.

Establishment of the EKARD Institute for Cancer
Diagnosis Research

Diagnosis of cancer is becoming increasingly dependent on identifying types of cancers with ever greater precision - and treating them with more specific targeted therapies. The establishment of the EKARD Institute for Cancer Diagnosis Research in the Moross Integrated Cancer Center (MICC) is a key step toward that goal. The EKARD Institute was established by Bob and Renée Drake of the Netherlands and was celebrated in a festive breakfast ceremony on November 10.

“Whereas a doctor might have previously said, ‘You have cancer,” or ‘You have melanoma,’ the next step that scientists are working on is to specify what kind of melanoma,” said Prof. Yardena Samuels of the Department of Molecular Cell Biology and head of the new EKARD Institute, who is a melanoma specialist. The EKARD Institute will work closely with scientists at the Nancy and Stephen Grand Israel National Center for Personalized Medicine to translate insights on diagnosis to potential personalized therapies.

Israeli author and journalist Ari Shavit (pictured at left) was the keynote speaker at the traditional Clore Lunch, hosted by Dame Vivien Clore Duffield on Nov. 9. Mr. Shavit is the author of the 2013 bestseller My Promised Land: the Triumph and Tragedy of Israel. Mr. Shavit was born and raised in Rehovot, and his father was a scientist at the Weizmann Institute. “Being at the Weizmann Institute really is, literally, like coming home,” he said. At the lunch he echoed Dame Vivien’s praise of the value of women in science, noting that his great aunt was the English chemist Rosalind Franklin, who is played by Nicole Kidman in Photograph 51, a UK play about the pioneering woman scientist behind the discovery of DNA’s double helix structure.

Dame Vivien awarded the Clore Prize to Dr. Ziv Shulman, a new recruit in the Department of Immunology, and awarded the Clore Postdoctoral Fellowships. The lunch was also an opportunity to celebrate the establishment of the Clore Institute for High-Field Magnetic Resonance Imaging which will set a new bar for MRI research.

Foreign postdocs: at home at Weizmann

Weizmann Institute international postdocs discussed their research and their experiences in Israel and on campus at a special session at the International Board on Nov. 11. Board members and guests heard from Dr. Savani Anbalagan, a neuroscientist from India; Dr. Valentina Caracuta, an archaeologist from Italy; Dr. Anne Fages a French scientist working in Chemical Physics; Dr. Michael Krueger, a physicist from Germany; Dr. Benjamin Palmer, who is from Wales and is studying biomineralization; and Dr. Nicolas Panayotis, a French biochemist.

Each postdoc extolled the virtues of his or her lab, saying that it is known in the field that the Weizmann Institute is the best place to study their specialization, and that they appreciated the friendly atmosphere and good working relationships with their respective principal investigators - and life in Israel.

The establishment of the Dimitris N. Chorafas Institute for Scientific Exchange was celebrated on Nov. 10 in the presence of Eva Binder, the longtime partner of Dimitris Chorafas of Zurich. Mr. Chorafas passed away in 2014, shortly after making the visionary gift to establish the Chorafas Institute, which funds international scientific conferences on the Weizmann Institute campus, enabling the Weizmann Institute to solidify its role as a world hub of scientific research. The Chorafas Foundation also funds the Chorafas Prize for outstanding students at the Feinberg Graduate School and at leading academic institutions worldwide. 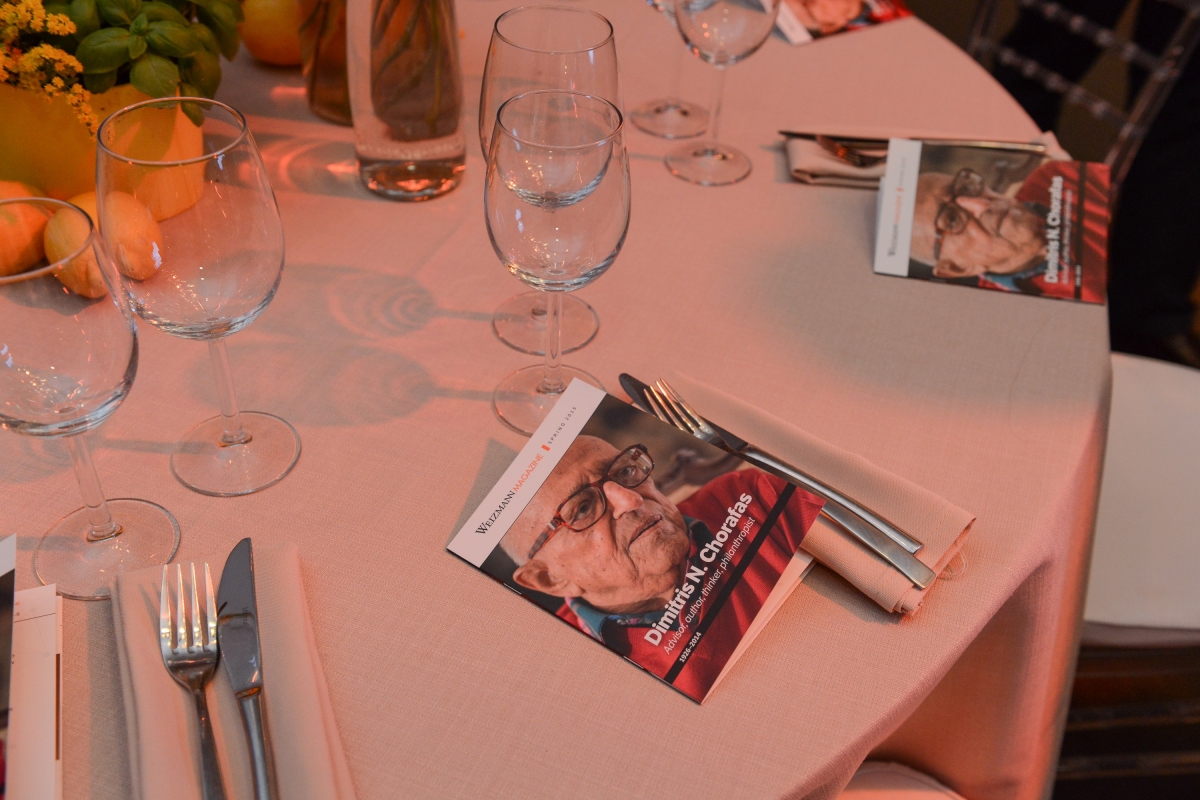 New Labs dedicated at the G-INCPM

Three new labs in the Nancy and Stephen Grand Israel National Center for Personalized Medicine were established by generous donors: the Leesa Steinberg Automated Biology Laboratory; the Steven Romick and Carol Ann and Moise Emquies and Family and Eden and Steven Romick and Family Compound Management Laboratory; and the Blythe Brenden-Mann Genomic Sequencing Laboratory. All the gifts provide cutting-edge tools for Weizmann Institute scientists and other Israeli scientists to advance research on precision medicine.

Some 70 American friends came together to support the establishment of a new lab at the Weizmann Institute, in a gesture honoring the 70th anniversary of the American Committee for the Weizmann Institute of Science. The ACWIS 70th Anniversary Lab, headed by Dr. Noam Stern-Ginossar and located in the Arthur and Rochelle Belfer Building for Biomedical Research, was dedicated in a ceremony on Nov. 8.

The fundraising effort was spearheaded by Alan Fischer of New York, in 2014, with the intention of supporting the lab of a newly recruited scientist; in a mere year and a half, U.S. donors doubled the original goal, thereby supporting the lab and equipment needs of Dr. Stern- Ginossar. Dr. Stern-Ginossar, of the Department of Molecular Genetics (pictured with Mr. Fischer), studies viruses and how they invade healthy cells, then take over the cell’s systems to survive and reproduce.

“This lab is a treasure, and a shining example of the close partnership we have enjoyed with our American friends since the 1940s,” said Prof. Daniel Zajfman.

A gift for memory and renewal: A new lab for
Dr. Ofer Firstenberg

Dedicating a laboratory at the Weizmann Institute of Science offered a chance to “close the circle and bring renewal” to a family’s bittersweet story of loss, love, and survival, said Ettalana Goldman of South Africa at the lab’s dedication on November 9. The Laboratory in Memory of Leon and Blacky Broder of Switzerland funds the research of Dr. Ofer Firstenberg of the Department of Physics of Complex Systems.

Hildegard “Blacky” Broder was Mrs. Goldman’s late aunt, who had been in the Dutch resistance movement against the Nazis. Blacky met Leon, from Leipzig, after the war. His first wife and their 13-year-old son, Manfred, were killed in the Holocaust. Leon survived the Auschwitz and Buchenwald death camps. Leon and Blacky built a successful life together in the Netherlands and Switzerland, and left part of their estate to the Weizmann Institute. “We remember them with much love and great respect. They were generous to family and friends, and their bequest to the Weizmann Institute reflects their appreciation of excellence,” Toby Goldman said, adding, to Dr. Firstenberg: “May you follow your dreams and break through the barriers in your field of science, and may they bear fruit for the benefit of all humanity.” Pictured from left to right: Toby and Ettalana Goldman, Dr. Firstenberg.

Dedication of the Neil Shore Laboratory

Neil Shore of Toronto, after unveiling the plaque at the newly dedicated Neil Shore Laboratory at the Davidson Institute of Science Education, on Nov. 12. Mr. Shore has actively participated in the programs he supports, in particular Math-by-Mail, an online program that teaches math to elementary-school students through stories, puzzles, and riddles. 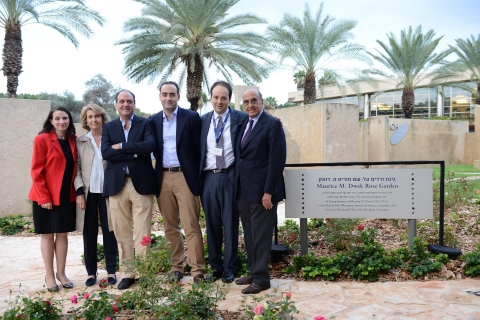 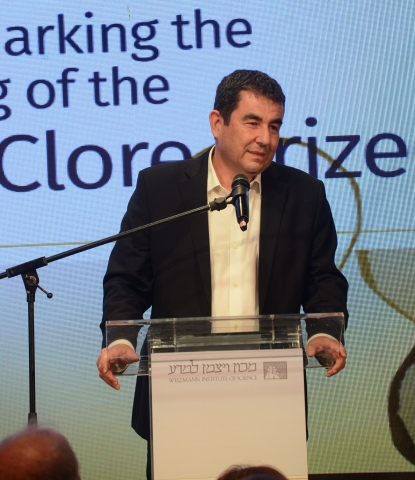 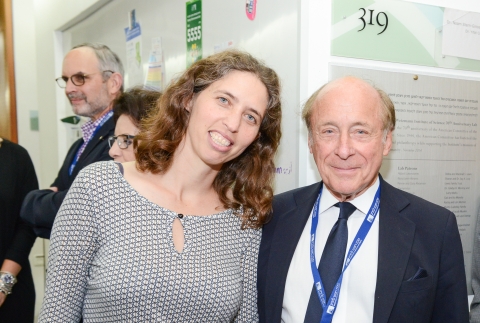 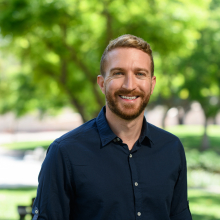 Dr. David Gokhman is searching for the adaptations that set humans apart, by comparing human genes to those of two close relatives—the extinct Neanderthal and Denisovan species, and the great apes. 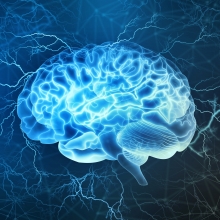 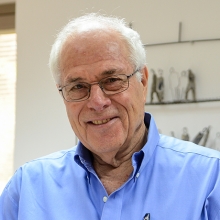