A particularly powerful way of linking specific network states to particular behaviors, is through the study of individual differences. By searching for networks whose variance across individuals accurately predicts their variability in performance on the task of interest, we can create hypotheses about the function of these networks. Through the combination of multiple different tasks, we can begin to attempt to deconstruct the different processes which underlie complex tasks. An ever-growing number of studies are finding that individual differences in correlations in and between different brain regions predict both severity of clinical symptoms, and performance on a wide range of tasks. Many critical questions however remain unanswered by these and similar findings. The first, is that of causality What is the functional significance of these correlations we find between functional connectivity and behavior? What will happen if we change the networks, will we see a corresponding change in behavior? This uncertainty is aggravated by the ambiguous link between correlations and connectivity. Correlations are our main tool for measuring connectivity in the human brain, but it is a sorely limited tool. We tend to think of correlation as signifying communication, but correlations between different brain regions during rest and during sleep tend to be much more widespread than during task. In epileptic patients, periods with epileptic activity are also characterized by high correlations but it is doubtful that meaningful communication is taking place. To test this, we must directly manipulate the networks. Using covert neurofeedback, a method by which we monitor brain activity in real-time, and then directly reinforce desired network states, we can perturb the networks, and then test what effect this change in the networks had on behavior. 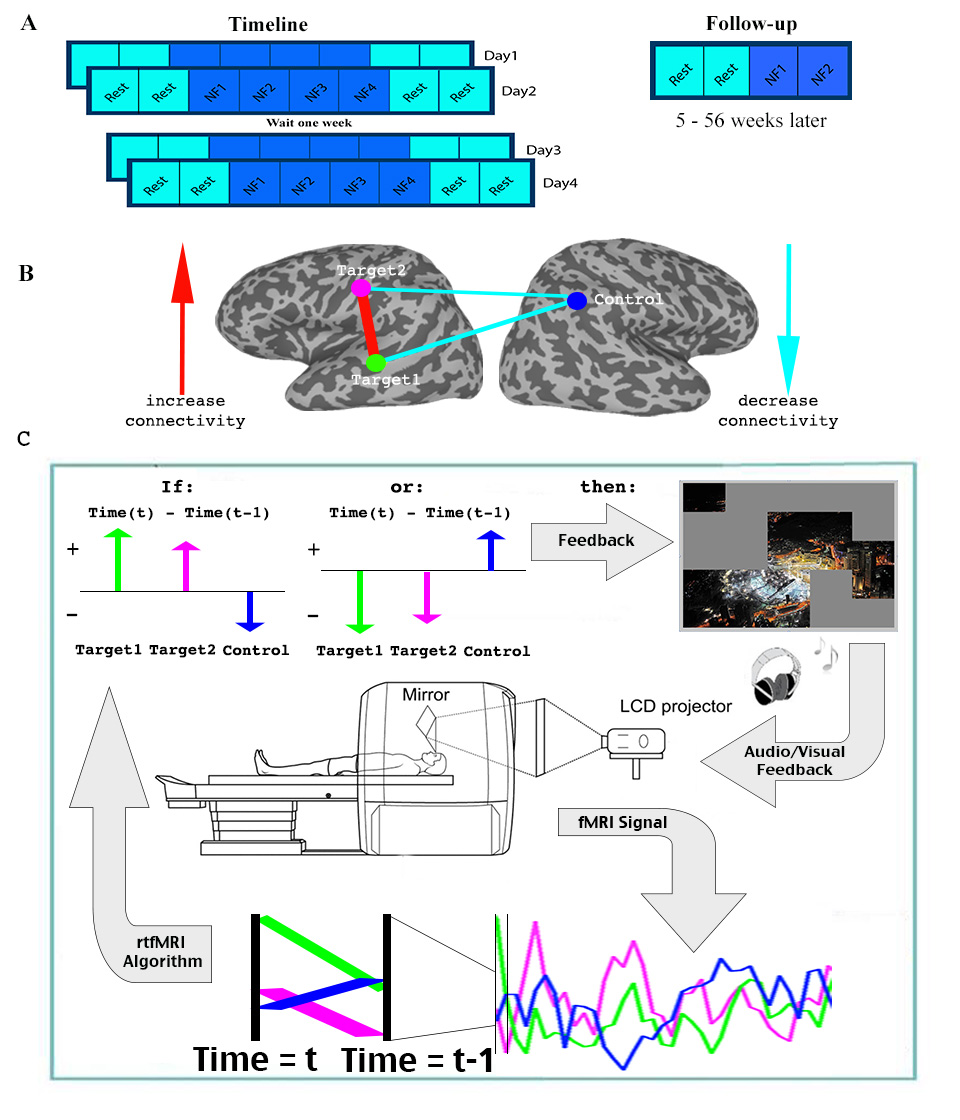 An example of a covert neurofeedback setup used in a previous experiment. Data was collected and analyzed in real-time using fMRI, and a decision whether to present feedback (reveal a square of the picture + positive sound) was made based on the change in signal from one time (t-1) to the next (t) in the three regions of interest (ROIs). Feedback was given if the direction of change in the two targets was the same, and opposite from the direction of change in the control ROI.