Early in development, infants learn to solve visual problems that are highly challenging for current computational methods. We present a model that deals with two fundamental problems in which the gap between computational difficulty and infant learning is particularly striking: learning to recognize hands and learning to recognize gaze direction. The model is shown a stream of natural videos, and learns without any supervision to detect human hands by appearance and by context, as well as direction of gaze, in complex natural scenes. The algorithm is guided by an empirically motivated innate mechanism – the detection of ‘mover’ events in dynamic images, which are the events of a moving image region causing a stationary region to move or change after contact. Mover events provide an internal teaching signal, which is shown to be more effective than alternative cues and sufficient for the efficient acquisition of hand and gaze representations. The implications go beyond the specific tasks, by showing how domain-specific ‘proto concepts’ can guide the system to acquire meaningful concepts, which are significant to the observer, but statistically inconspicuous in the sensory input.

Hands are frequently engaged in motion, and their motion could provide a useful cue for acquiring hand concepts. Infants are known to have mechanisms for detecting motion, separating moving regions from a stationary background, and tracking a moving region. However, our simulations showed that general motion cues on their own are unlikely to provide a sufficiently specific cue for hand learning: the extraction of moving regions from test video sequences can yield a low proportion of hand images, which provides only a weak support for extracting the class of hands. Infants are also sensitive, however, to specific types of motion, including launching, active (causing other objects to move), self-propelled, or passive. On the basis of these findings, we introduced in the model the detection of active motion, which we call “mover” event, defined as the event of a moving image region causing a stationary region to move or change after contact. Mover detection is simple and primitive, based directly on image motion without requiring object detection or region segmentation.

Mover event detected in the red cell: motion (left) flows into the cell, (middle) stays briefly in the cell, and then (right) leaves the cell, changing its appearance. Motion is shown in color, where warmer colors indicate faster motion
Spatiotemporal analysis of image cells for detecting a mover event. (Top-left) Stable image cells (yellow) change their appearance while motion flows in (blue;bottom-left) and then out (green;bottom-right), are detected as mover events (red) if the motion caused a change in their stable appearance (top-right).

Learning to Detect Hands by Appearance and Context

Detection is initially limited to specific hand configurations extracted as movers, typically engaged in object grasping. Detection capabilities rapidly increase during the learning process based on two mechanisms: tracking and body context. Developmental evidence indicates that young infants already have these capacities at an early age. Because hands are detected on the basis of either appearance or body context, we found that the two detection methods cooperate to extend the range of appearances and poses used by the algorithm. The context-based detection successfully recognizes hands with novel appearances, provided that the pose is already known (“pose” here is the configuration of context features, on the shoulders, arms, etc.). The newly learned appearances lead in turn to the learning of additional poses. The results show that appearance-based and context-based recognition guide each other to boost recognition performance.

Hand detection performance. (Left) Detector trained from mover events only (magenta), and after one (blue) and three (green) iterations of cotraining by appearance and context. The top curve (red) shows performance obtained with full (manually) supervised learning. (Right) Results after three iterations of training as before (green), without using context (blue) and without tracking (cyan). Error bars indicate SE across eight folds of cross-validation.

Learning to Detect Direction of Gaze 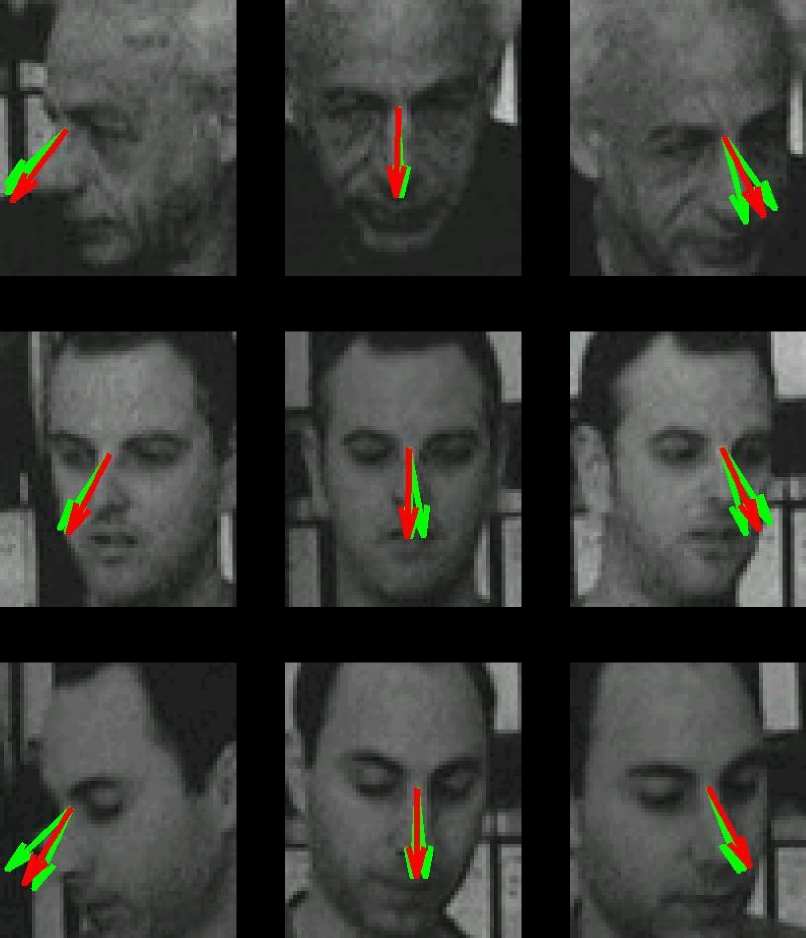 Infants’ looking is attracted by other people’s hands engaged in object manipulation, and they often shift their gaze from face to a manipulating hand. People often look at objects they manipulate, especially slightly before and during initial object contact. Our algorithm therefore uses mover events as an internal teaching signal for learning direction of gaze. It detects presumed object contacts by detecting mover events, extracts a face image at the onset of each mover event, and learns, by standard classification techniques, to associate the face image with the 2D direction to the contact event. Consistent with developmental evidence, we assume that initial face detection is present before gaze learning, and locate the face with an available face detector. The resulting classifier estimates gaze direction in novel images of new persons with accuracy approaching adult human performance under similar conditions.

Learning direction of gaze from mover events. The appearance of the face (green) is associated with the direction (red arrow) between the face and the location of the mover event (yellow) at the time of the event.