Apoptosis, also referred to as type I cell death, is the major form of programmed cell death (PCD). Apoptosis depends on the action of proteases called caspases and is characterized by distinct morphological features. However, nonapoptotic, alternative cell death (ACD) pathways have also been reported, and have received much attention recently because of their potential roles in the pathology of diseases and the promise for possible new therapies. Despite recent growing interest in unraveling the components and mechanisms underlying ACDs, progress in this area has been relatively slow. One reason for this is that ACDs are often manifested only following nonphysiological conditions/manipulations in certain cell lines, and thus their relevance in normal development and homeostasis and in the pathology of diseases remained largely unknown. Although fascinating, thus far, only very few developmental paradigms of ACDs have been described in organisms with conventional apoptotic caspases, such as Caenorhabditis elegans and Drosophila.

We have recently demonstrated that germ cell death (GCD), the process which normally eliminates about 25% of the pre-meiotic germ cells in the adult Drosophila testis, is a nonapoptotic ACD pathway. Furthermore we revealed some of the mechanisms and components involved in the execution of GCD, including some lysosomal enzymes. Given the powerful genetic techniques available, GCD in Drosophila promises to be a powerful physiological system to identify novel regulatory pathways and mechanisms of ACD. Ultimately, we aim to elucidate the basis for the resistance of certain cells to PCD, and why some cells ‘prefer’ to die by a noncanonical pathway instead of classical apoptosis. 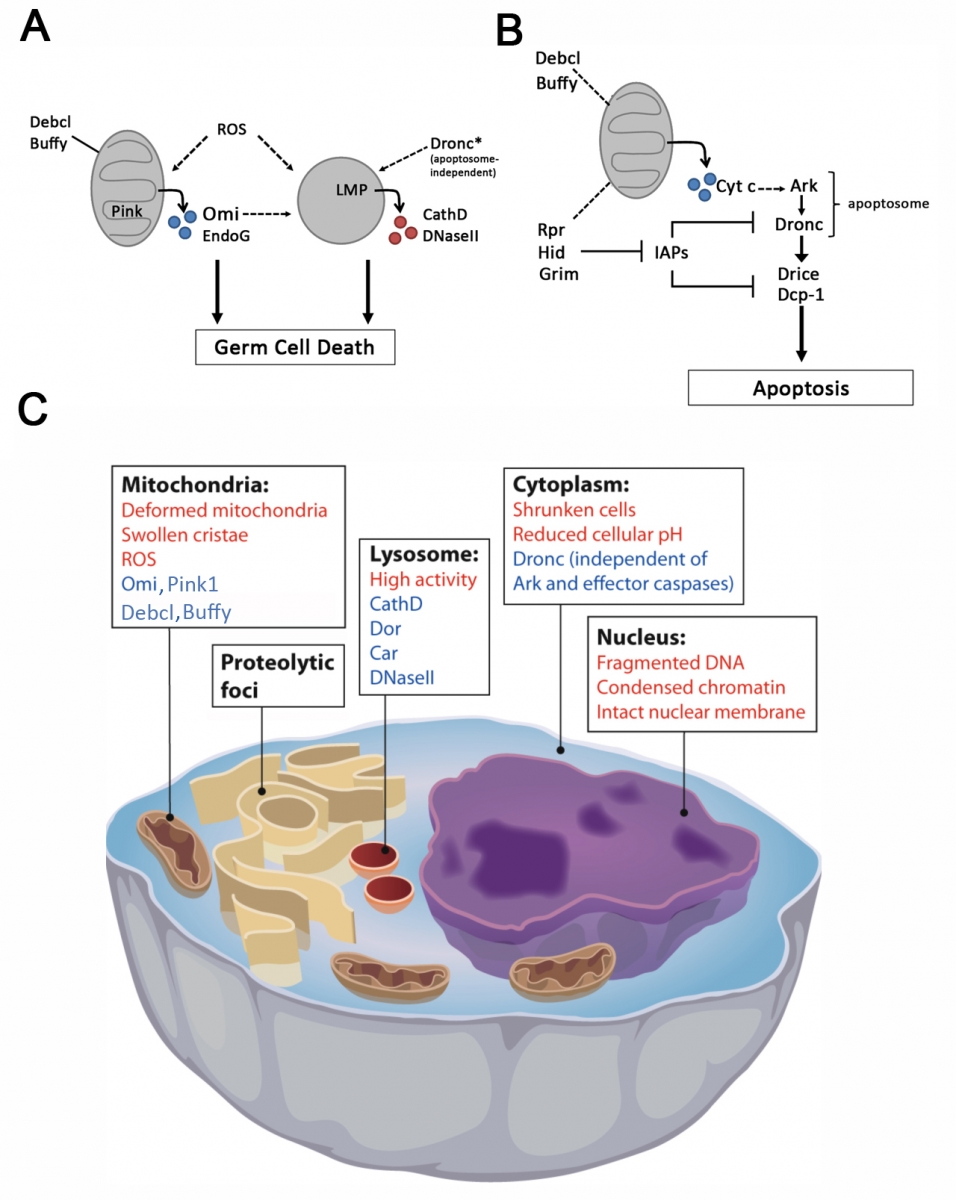 Comparison between the models of GCD and conventional apoptosis pathways in Drosophila. (A) The diagram depicts the components involved in GCD. Solid arrows indicate proposed connections based on interpretation of the genetic data in our study, whereas dashed arrows describe possible interactions based on data from the literature. The asterisk signifies a proposed target for Dronc. (B) A schematic model of the core apoptotic machinery in Drosophila. Major components and interactions are depicted by solid arrows (activation) or T-shapes (inhibition), whereas dashed lines or arrows signify less general components and interactions. (C) An illustration of the different genetic components (in blue) and the biochemical and morphological features (in red) implicated in GCD.