The Mystery of the Missing Antimatter 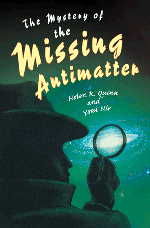 In the first fractions of a second after the Big Bang lingers a question at the heart of our very existence: why does the universe contain matter but almost no antimatter? The laws of physics tell us that equal amounts of matter and antimatter were produced in the early universe--but then, something odd happened. Matter won out over antimatter; had it not, the universe today would be dark and barren.

But how and when did this occur? Helen Quinn and Yossi Nir guide readers into the very heart of this mystery-and along the way offer an exhilarating grand tour of cutting-edge physics. They explain both the history of antimatter and recent advances in particle physics and cosmology. And they discuss the enormous, high-precision experiments that particle physicists are undertaking to test the laws of physics at their most fundamental levels-and how their results reveal tantalizing new possibilities for solving this puzzle at the heart of the cosmos.

The Mystery of the Missing Antimatter is at once a history of ideas and an exploration of modern science and the frontiers of human knowledge. This exciting, accessible book reveals how the interplay of theory and experimentation advances our understanding and redefines the questions we ask about our universe.