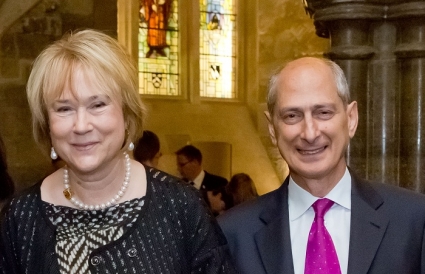 Dr. Judy and David Dangoor, members of the Weizmann Institute’s International Board, provided the major gift that, in 2013, established the Dangoor-Research Accelerator Mass Spectrometer (D-REAMS). In 2018, the couple created the Dangoor Chair of Archaeological Sciences, with Prof. Elisabetta Boaretto, director of the
D-REAMS lab, as its first incumbent. Offering a unique and science-based approach to the analysis of archeological samples, the D-REAMS lab has pioneered new techniques that allow increasingly precise dating of physical artifacts, as well as important insights related to history and the transmission of culture.

Supporting scientific archaeology was a perfect fit for the Dangoors — Judy is a scientist by training (she obtained a PhD in photosynthesis at Imperial College) and David’s family has been deeply involved in ensuring the preservation of the historical narrative of the Jews of Iraq, where he lived himself and attended primary school until moving to the UK in 1960.

David’s father, an Iraqi-born Jewish entrepreneur, created the Exhilarch’s Foundation, the largest private supporter of London’s Francis Crick Institute, and the benefactor of numerous other causes in the UK and Israel. His grandfather was the largest printer of Arabic books in Iraq, and his great-grandfather was Baghdad’s chief rabbi.

David is deeply devoted to Jewish causes in Israel and the UK, and has served, among other roles, as President of the Elders of the Spanish-Portuguese Sephardic Community, and as a Trustee of the Simon Wiesenthal Centre, UK. “Archaeology is a non-political subject that is common to all of the Middle East,” says David, adding that they are major advocates of nourishing cooperation between Israeli scientists and scientists from other countries. Judy adds: “Understanding of the past throws a lot of light on the present. It is very sobering how we’re all very much connected to each other.”