Atmospheric dynamics of the Gas Giants

The two gas giants of the Solar System, Jupiter and Saturn, exhibit strong zonal flows at the cloud level. The Jupiter winds consist of strong zonal jets (up to 140m/s) alternating latitudinally between eastward and westward jets, and have a significant asymmetric component between the northern and southern hemispheres. On Saturn, the wind pattern is a wide and mostly symmetric eastward flow of nearly 500 m/s at the equatorial region, and smaller scale jets extend to high latitudes. But how deep these winds penetrate into the planets interior remained a fundamental open question until recently, when both Juno at Jupiter and Cassini at Saturn enabled answering this decades long question. The gravity experiments, performed by both spacecrafts, provided measurements of the gravity harmonics with unprecedented accuracy. They brought into light substantial differences between the two planets. The Jupiter’s even gravity harmonics were found to follow closely those predicted by rigid body models and its odd harmonics to be large, clearly above the measurement uncertainty level. Conversely, the even harmonics in Saturn deviate considerably from those predicted by rigid body models, especially for harmonics larger than J4, and its odd harmonics turned out small with only J5 being substantially above the uncertainty level. Another remarkable difference is a small but clearly detectable part of Saturn’s gravity that has no counterpart on Jupiter and whose nature is currently unknown. Using the gravity measurements, together with an adjoint based inverse model of the flow dynamics, we find that on both planets the winds are very deep - reaching around 3,000km on Jupiter and even deeper on Saturn. This points to some similarities and differences on both planets. In both planets the winds observed at the cloud level are a manifestation of deep flows extending thousands of kilometers deep. With that, the differences are striking. The winds on Saturn, a planet smaller than Jupiter, penetrate 3 times deeper and are much more symmetric than the winds on Jupiter. The winds on Jupiter, penetrating to lesser depths, seems to be less connected between the hemispheres, and thus allowing stronger asymmetries to evolve. These differences are likely the result of Saturn having a 3 times smaller and a much weaker magnetic field. 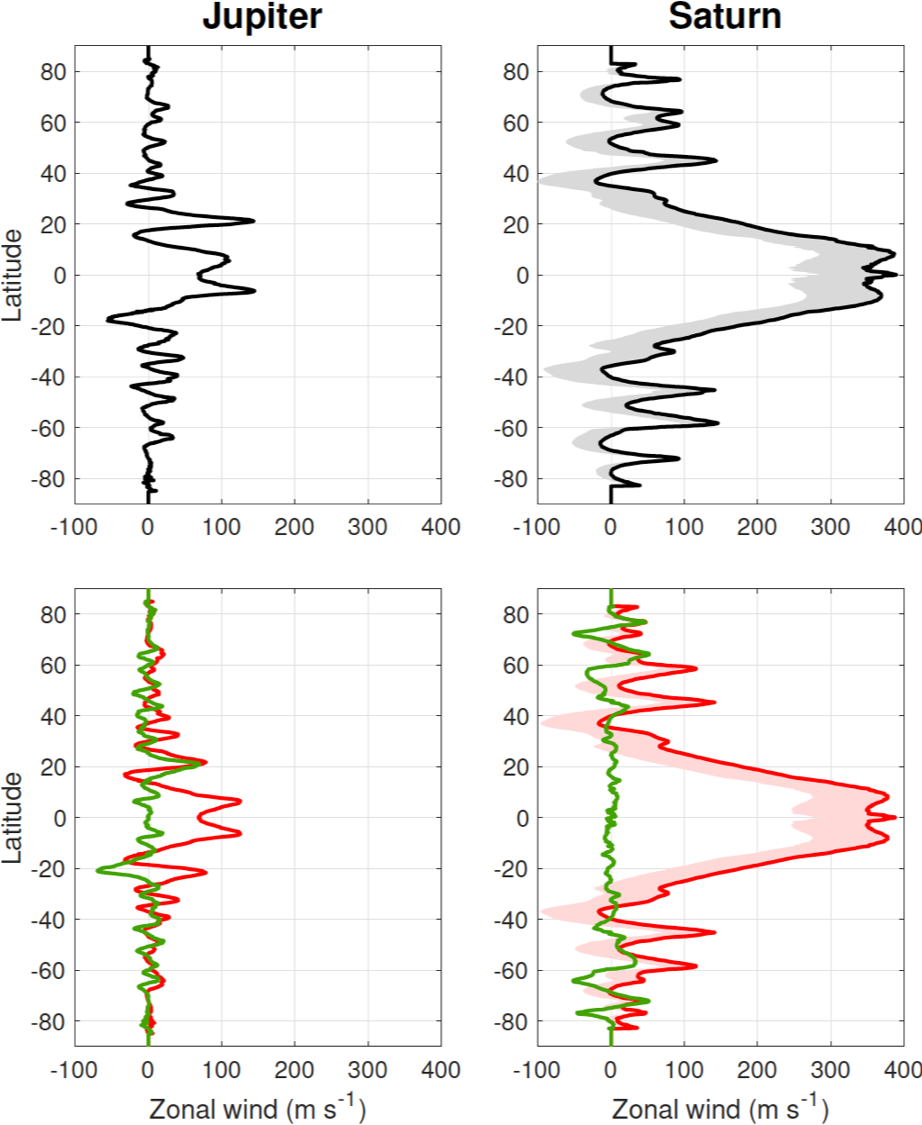 The cloud-level winds on Jupiter and Saturn. In the lower panels the symmetric and asymmetic components are shown.