The Yatir Forest Research site (see Links) was setup as a field laboratory to investigate the tradeoffs among water use, carbon sequestration and radiation budgets in semi-arid ecosystem during climate change.

The site is part of global FLUXNET, a global network of micrometeorological tower sites that use eddy covariance methods to measure the exchanges of carbon dioxide, water vapor, and energy between terrestrial ecosystems and the atmosphere. More that 500 tower sites from about 30 regional networks across five continents are currently operating on a long-term basis.

The overarching goal of FLUXNET is to provide information for validating remote sensing products for net primary productivity (npp), evaporation, and energy absorption.

FLUXNET provides information to FLUXNET investigators and to the public. The primary functions of FLUXNET are: 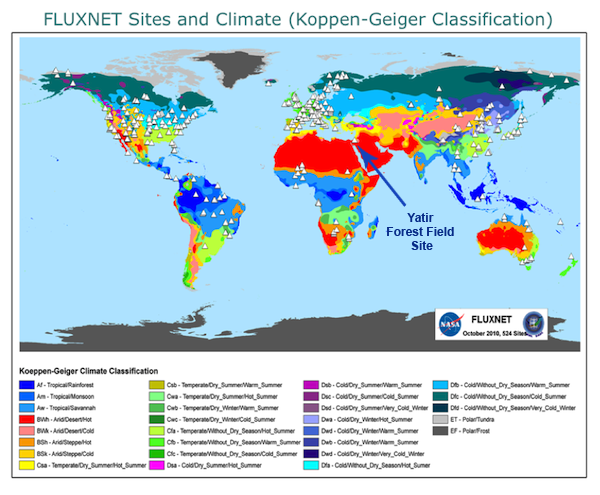 The Yatir site is one of the few sites representing the semi-arid climatic regions. Rapidly growing population and a trend toward urbanization as well as predicted climatic changes will heighten water shortages and open land available for forestation and carbon storage. An alarming turn in this respect comes from the IPCC 2007 report predicting ~20% decrease in precipitation in the Mediterranean basin region, associated with warming of 2-4˚C by the end of the century.

In the Yatir Project, initiated in 2000, we focus specifically on the complex impact of land use changes, such as afforestation, on carbon sequestration potential, surface temperature (energy budget), and water yield (the difference between precipitation and loss by evapotranspiration). Understanding these aspects and the unavoidable tradeoffs among them are often neglected, especially in the semi-arid region. But their knowledge should be used as a critical tool in formulating national and regional water and carbon management policies. Quantitative knowledge of these tradeoffs should also help in better understanding biosphere-atmosphere interactions on the global scale.

The importance of land cover, and forestation in particular, on water yield was noted in the past: Stanhil estimated in 1993 that land use changes in Israel, from extensive tree cover (e.g. 10,000 years ago) to intensive agriculture (today) significantly altered water yield. A main consequence of widespread decrease in evapotranspiration due to land use changes, or due to high CO2 induced reduction in plant transpiration, is increase in runoff, contributing to floods, erosion and loss of fertile soils. Evapotranspiration, however, also provide the driving force for forest growth and carbon sequestration (together with other factors, such as nutrient availability). We have demonstrated, using the Yatir forest as a case study, that the semi-arid zone has, in fact, greater potential than initially expected for carbon sequestration, the consequently in the development of productive pine forests. In addition to the obvious tradeoffs between water yield and carbon sequestration, afforestation in the semi-arid region also has larger than expected effects on surface temperatures. This is because of the prevalent high solar radiation and low cloud cover, and the large changes in surface albedo (reflectivity) associated with forestation of local bare and bright surfaces. On sufficiently large scales, such changes in surface energy budget can influence local climate. Changes in forest cover due to climate change or human activities, have therefore complex but important consequences for water, carbon and the local environment that are poorly understood at present. Such changes could feed-back on the atmosphere and climate system. We are at a good position in terms of location and scientific expertise to significantly advance our knowledge on this front.

The Yatir site is also part of the newly developing European Integrated carbon observation system (ICOS). The 20 years mission of ICOS is to provide the long-term observations required to understand the present state and predict future behavior of the global carbon cycle and greenhouse gas emissions. And to monitor and assess the effectiveness of carbon sequestration and/or greenhouse gases emission reduction activities on global atmospheric composition levels, including attribution of sources and sinks by region and sector. 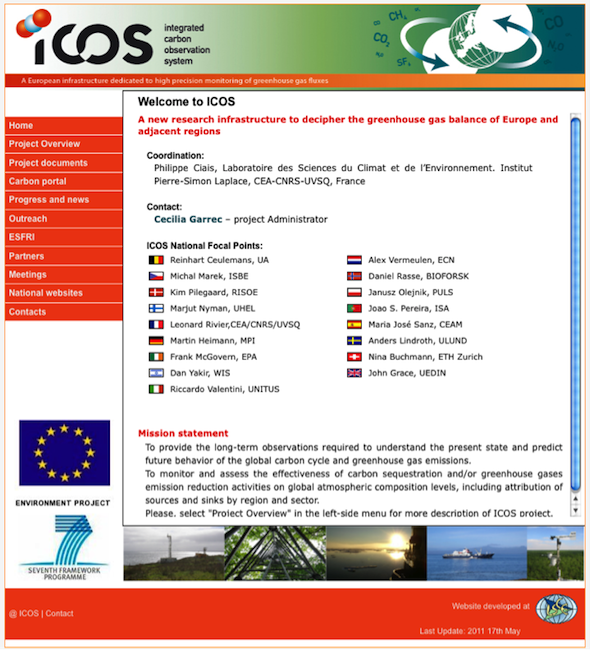