For the past fifteen years, an extension of the Weizmann Institute, the Yatir research station, has been monitoring the atmosphere above a patch of forest in southern Israel, producing data on the exchange of water, carbon and energy between the atmosphere and the semiarid ecosystem. This station, the sole Israeli contribution to the global chain called FLUXNET, has generated scores of doctoral theses and scientific papers, as well as adding invaluable pieces to the picture of global climate change.

Yet the future of the station was uncertain; its long-term funding threatened to dry up. That is when a generous donor named Robert Lewis, together with his sister, Cathy Wills, stepped into the breach with a promise to provide support for the station for the next ten years. In fact, Lewis was so impressed with the work being done there that he asked the head of the project, Prof. Dan Yakir of the Environmental Sciences and Energy Research Department in the Faculty of Chemistry: “What else do you need to develop this research?” Yakir’s reply was prompt: “We would like to be able to be mobile.”

Thus was the Biosphere Atmosphere Research Mobile Lab born. The gestation period was a long one: Together with Dr. Eyal Rotenberg, Yakir and their team spent over two years designing and assembling the lab from the chassis up. All of the equipment was custom-built, and a slew of engineers and experts from a dozen companies were involved in the project. In the process, the researchers found they had to become truck drivers as well as scientists – Yakir, Rotenberg and several of the crew are now licensed, and they have begun to figure diesel and maintenance costs into their research budget.

“Eventually,” says Yakir, “the mobile lab will become our main lab, and much of the work conducted today both at Yatir and in our Weizmann Institute lab will be carried out there. In the future, it will do everything the ten-year-old Yatir station can do and more.” Along with the computers and scientific gear, the lab hauls a huge telescopic mast that can raise equipment up to 30 meters in the air – 10 meters higher than the tower at Yatir – enabling researchers to study the atmosphere above the relatively tall canopies of Israel’s northern forests.

In addition to ongoing scientific research, Yakir would like to see the mobile lab used in various educational projects at the Weizmann Institute. “It’s often hard to get students excited about global climate science,” he says. “A mobile lab outside the classroom gives them the opportunity to see the cool equipment that is used in our research, and the real-time measurements on the computer screens could make the subject both immediate and attractive.” In the meantime, the FLUXNET organization has already invited Yakir to bring the lab to Europe, where they would like it to travel between the many fixed stations to check and calibrate them. View several relevant publications: 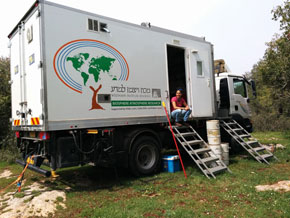 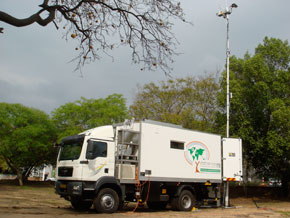 Eddy covariance measurements transformed research on biosphere atmosphere interactions on land. The stationary measurement sites that currently dominate this approach are limited in important aspects, including spatial coverage, instrumentation and flexibility in response to change. We developed a new methodological and conceptual approach that relies on a newly developed ecosystem mobile observing system, which can reach almost any measurement site on land.

The Mobile Lab includes traditional eddy covariance flux system, but also allows the use of analytical instrumentations under laboratory condition for additional and auxiliary measurements. Overcoming the main limitations inherent in the fixed towers, it can be used to validate footprint analyses, assess new methods, and greatly extend the range and dynamics of land ecosystem studies (see the 2013 international BRITE campaign). The mobile lab unit was successfully tested against the long-term permanent system in Yatir and was already used in several projects. Read more about the technical aspects of the Mobile Unit. 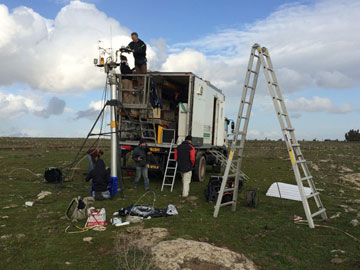 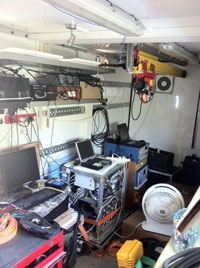 Prof. Dan Yakir’s research is supported by the Cathy Wills and Robert Lewis Program in  Environmental