The power of (photonic) attraction

Photons - particles of light - are not known for their social behavior. Measurements show that even within a highly focused laser beam, it is each photon for itself.

But Dr. Ofer Firstenberg, who recently joined the Weizmann Institute’s Department of Physics of Complex Systems, succeeded for the first time, together with his colleagues, to get photons to stick together to make “molecules of light.”

Dr. Firstenberg led the experiments that achieved this feat while conducting postdoctoral research at the Harvard Quantum Optics Center in Boston, where he was also a visiting scholar at MIT. He and his colleagues there created a special atmosphere in which photons could acquire mutual attraction: in this case, a thin, ultra-cold cloud of gas and several lasers.

Now, in his Weizmann Institute lab, Dr. Firstenberg plans to build two experimental systems: One of them will be very cold; the other will work at room temperature. In both, his aim will be to not only create these special molecules of light, but to use them to explore basic properties of quantum physics—the realm in which light particles exist.

Dr. Firstenberg grew up in Rishon LeZion, not far from the Weizmann Institute. His love of physics, he says, comes from a high school teacher who received her degree from the Institute’s Department of Science Teaching, as well as his uncle, Dr. Udi Shafir, who received his PhD from the Institute (and is a visiting scientist this year in the lab of Dr. Barak Dayan).

Dr. Firstenberg completed his BSc in physics at the Hebrew University of Jerusalem within the army’s prestigious Talpiot program. He received his MSc and PhD in physics from the Technion-Israel Institute of Technology. Then he ventured into industry, carrying out his PhD research in the quantum optics lab at Rafael Advanced Defense Systems Ltd., under the cosupervision of Prof. Amiram Ron of the Technion and Prof. Nir Davidson of the Weizmann Institute, before heading off to Boston.

He joined the Institute a year ago, and his wife Michal is a senior intern in the Department of Organic Chemistry. They have two daughters.

Today, he is building experimental systems using two lasers. The first is relatively strong. It clears out a sort of “transparency tunnel” inside the otherwise very opaque gas. Then he shines a weak laser beam into the tunnel. This is made up of photons that are extremely sluggish: They move at about a millionth of the normal speed of light. And they interact with the gas atoms in the chamber: They hit these atoms and cause the electrons in them to get excited, jumping into orbits that are much larger than normal, so the atoms become thousands of times bigger than the same atom at rest. When the electrons in a pair of atoms are kicked into high orbit, they act like antennas, creating a force between them. This force becomes the power of attraction when it is transferred to the photons, and the two individual particles become a couple.

The fact that such extraordinarily independent particles as photons can stick together has raised new questions that Dr. Firstenberg intends to explore. For example: How does the force that holds two photons together compare with the forces that exist within atoms or materials? What new physical phenomena can be observed by getting photons to interact with atoms and with one another?

If the work in his lab is all about mutual attraction—in the atomic world— he takes the theme to heart at home. He and Michal are competitive ballroom dancers, and their forte is the Argentinian tango. 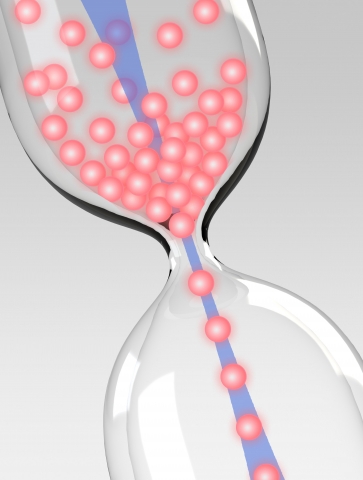 Illustration of one of the main goals of the Firstenberg lab, to realize an ordered “train” of photons. Dr. Firstenberg starts (on the top left) with classical laser light, for which the photons arrive at random times, and sends them through a cold gas of atoms. The light that is transmitted through the medium is very non-classical; the photons there arrive one-by-one, separated by a constant time interval. The hourglass illustrates the timely manner in which the photons cross the special medium. 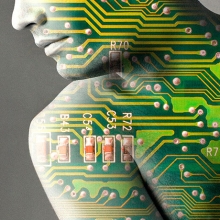 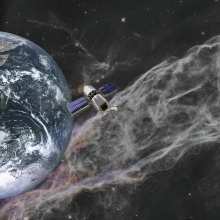 The Frontiers of the Universe initiative, which will be housed in a new building, is expected to generate an unprecedented, wide-lens view of where the Universe has been, where it is going, and how. 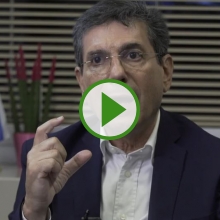