The physics of frictional interfaces is central to a wide range of physical, biological, engineering and geophysical systems, ranging from crawling cells to earthquake faults. Yet, a basic understanding of the interfacial friction constitutive law and the spatiotemporal dynamics that emerge when two deformable macroscopic objects move one relative to the other is currently missing. In addition, novel laboratory and geophysical observations revealed new frictional phenomena, such as slow rupture, which are not yet well-understood. At a more fundamental level, frictional interfaces raise basic questions about strongly out-of-equilibrium physics and the roles played by lower dimensional objects in the macroscopic response of physical systems.

In our new research program we aim at addressing these basic questions from a theoretical perspective, yet in close relation to quantitative experiments. For example, through theoretical arguments and a compilation of an extensive set of experimental data sets, we have recently shown that velocity-strengthening friction (where the steady-state frictional resistance increases with increasing slip velocity) might be a generic property of frictional interfaces. We have then theoretically shown that this generic property, often overlooked in the literature, may have significant implications on frictional dynamics in a broad range of systems, affecting interfacial dissipation, kinetic energy radiation and the global strength. New phenomena such as slow rupture, where slip is mediated by the propagation of rupture fronts that travel at speeds orders of magnitude slower than elastic wave-speeds, emerge. We also extensively study frictional instabilities that give rise to complex spatiotemporal interfacial dynamics. For more details see the papers and figure below. 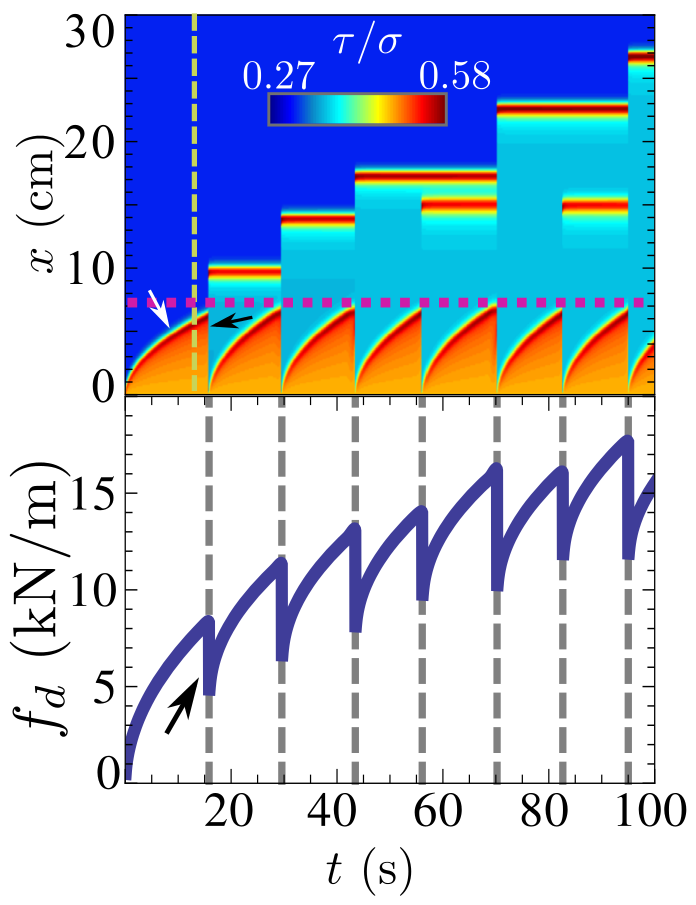 Spatiotemporal dynamics of stick-slip motion
The bottom graph shows the applied force as a function of time, featuring the typical friction phenomenology: slow quasi-static loading, interrupted by abrupt and almost instantaneous drops in the friction force. The top graph shows the underlying spatially extended dynamics that give rise to this behavior. 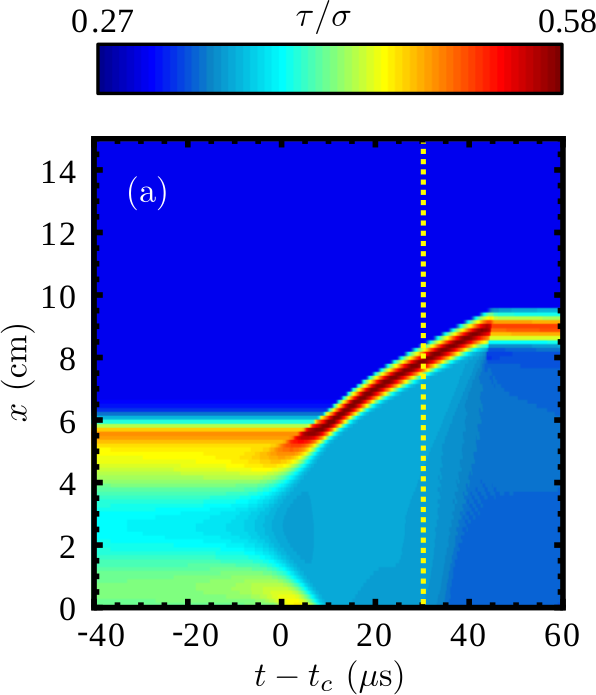 Blowup of the dynamics during the force-drops

By inspecting the dynamics at a much finer temporal resolution (6 orders of magnitude!), we are able to resolve the emergence of a quasi-steady-state rupture front.