We look into new physical tools for initializing, reading out, and increasing the interrogation times of atom interferometers.

Atom interferometers rely on coherent light-matter interaction to control the momentum of atoms and thus their motion in space. Light pulses spatially split the atomic wave-function and cause it to propagate simultaneously along two different paths, then recombine and produce fringes which are extremely sensitive to inertial motion of the atoms. Such experiments reach state-of-the-art precision in measuring fundamental physical constants as well as testing general relativity and new theories of dark matter.

The research in our group in collaboration with the group of Prof. Nir Davidson focuses on new methods in atom interferometry which utilize coherent light-matter interaction not only as beam-splitters and mirrors but also during initialization and detection of the interferometers, which allows interfacing them with traditional optical interferometers. In addition we study new methods for atomic trapping and levitation, and incorporating them in atom interferometers with the aim of substantially increasing their interrogation time and thus their sensitivity. 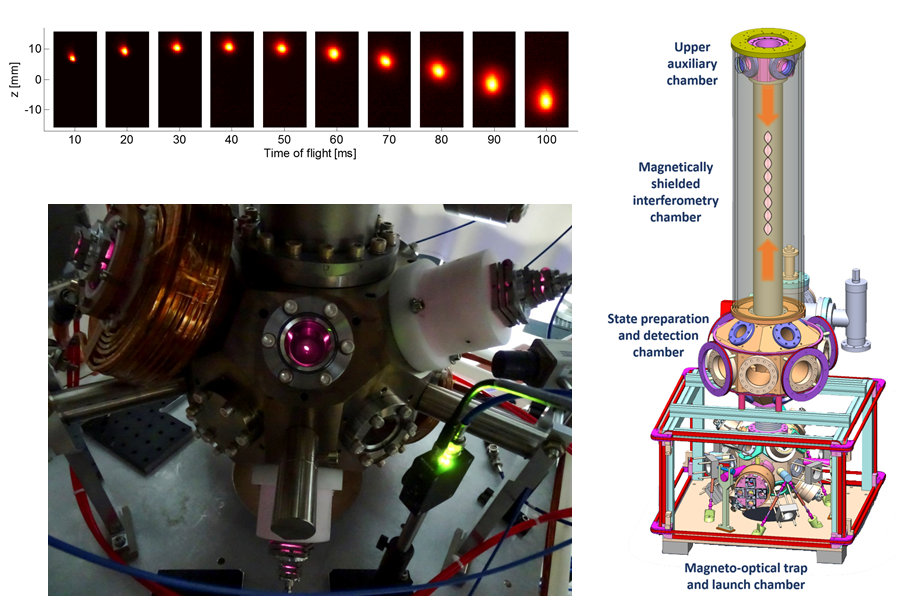 Design of the atom interferometer setup (right). The atomic cloud expands and falls under gravity (top left) after being released from the magneto-optical trap (bottom left).

We are studying the effect of atomic motion on slow-light polaritons – a superposition of light and matter excitation propagating slowly through the atomic vapor. The much reduced group velocity -- due to the small fraction of the 'light constituent' of the polariton relatively to its 'matter constituent' -- increases the sensitivity of polariton propagation to the transverse motion of the atoms. We aim at using optical interferometry for sensing the transverse drag of slow light resulting from inertial dynamics of the system.