Leela joined my group in 2013 after completing his PhD in the laboratory of the distinguished solid-state chemist C.N.R. (Ram) Rao in the JNCASR in Bangalore, and spending two years in the lab of Sammy El-Shal in Virginia Commonwealth University. His venue coincided with the publication of the first few papers on nanotubes from “misfit” layered compounds (MLC), like SnS-SnS2 and PbS-TaS2 by Gal Radovsky et al. My research group was the largest ever in my career and the atmosphere among the students was very informal and congenial. Leela found his way to the heart of the people very soon after arrival. In the first few months, I asked him to try get nanotubes from different layered compounds and decorate WS2 nanotubes by magnetic nanoparticles, which did not work out satisfactorily. Therefore, I asked him to find a suitable MLC family and try synthesizing nanotubes thereof using any method he may opt for. In the meantime, he also learned to use the electron microscopy set-ups and decipher electron diffraction data using our “workhorse” of the time- the CM120 TEM. Probably not one month passed and he started to “bombard” me with TEM images of nanotubes from new MLC’s in a high rate. Of course serious characterization took time, but the “flux” of new MLC nanotubes, which he and Gal synthesized was a real boon to our lab. Thus, in 2014 we published the first paper in Angewandte Chemie Int. Ed. on the synthesis and some preliminary electron microscopy characterization of nanotubes from the misfit layered compounds LnS-CrS2 (VS2), which I felt was a great accomplishment. Leela came with an original synthetic procedure, starting from a mixture of metal hydroxides and controlled annealing in H2S, which was very different from the one used by Gal Radovsky, i.e. chemical vapor transport. This was also the first time we have reported nanotubes from quaternary MLC like LaS(GdS)0.2-CrS2.

This success made him self-confident that he can dare to synthesize nanotubes from new family of misfit compounds, which were not included in my list of targeted MLC. Indeed working with chromium, calcium and cobalt oxides, he synthesized the MLC (CaO-CoO-CaO)-CoO2, where a layer of a rocksalt (CaCoO3) and CoO2 layer in octahedral arrangement, stack alternately forming a superstructure lattice. Leela came with the ingenious idea that socking this MLC in basic solution in hydrothermal conditions leaches one CaO layer from the unit-cell of the tetragonal structure producing asymmetric (CaO-CoO) rocksalt-hexagonal CoO2 MLC superlattice. This new asymmetric superstructure suffers strain forcing it to fold and form nanotubes by healing the edges. This beautiful work involved also heavy characterization effort via electron microscopy and DFT calculations. Much of the TEM effort was taken-up by Prof. Raul Arenal’s group in the University of Zaragoza in Spain. Raul continued this collaboration with Leela after he joined the Chemistry Department of IIT-Bombay, which lasted virtually to his last day. Subsequently, Leela replaced CaO by SrO and obtained (SrO-CoO)-CoO2 MLC nanotubes in high yields. Both works were published in first tier chemistry journals.

When Leela started looking for a job back in India, I made the decision to discontinue my involvement in the synthesis of oxide-based MLC and nanotubes thereof, leaving it entirely to Leela. Instead, I continued focusing my research on chalcogenide-based MLC and their nanotubes, as well as the nanotubes from the binary ternary layered compounds, which goes to these days.

Throughout his entire tenure here, Leela was in fact the glue that held my group together. He helped the other students daily, almost always with a smile spread on his face. I was extremely happy that he found his place in the Chemistry Department of IIT-Bombay, and built his home there. Shortly after arrival to Mumbai, Leela met a young beautiful Indian girl- Bharati and engaged with her and brought to the world a wonderful boy. Together with Ram Rao, I was proud that my expectation from him materialized and he started flourishing after few years of a hard work. On my last trip to India in 2019, I visited the IIT-Bombay and met Leela and his wife Bharati. During the years there, he consulting me from time to time. I was also able to review few of his papers from IIT-Bombay and learn of his wonderful progress as an independent young researcher.

I am deeply moved by his untimely sudden demise, leaving behind his young wife and a small kid and energized laboratory with many young students. My former students who keep contact through a small What’sUp cycle were shocked as well and wrote several personal obituaries, some included below. We will all sorely miss Leela and remember his winning smile forever.

few pictures of him are already on my homepage (see Events and Gallery). Below are a few other pictures of Leela with wife on the wedding day and with other students in my group.

This is how I want to remember you. You were a special, once-in-a-lifetime person. When I joined Reshef’s group, it was amazing and magical time, and the big part of that was you. Even in this group of exceptional people, you somehow stood out. You were the group’s baba, we chased you around the lab to kiss our ampules for the nanotubes to grow. We were partners in crime, because for a long time we were not only the only postdocs in the group, but the only foreigners. Before I arrived to Israel, we exchanged a couple of emails, and you, the person whom I’ve never met before, offered to buy some food and put it in the fridge to wait for me when I arrive.

You were a natural born leader, this special combination of brilliance and kindness, which made people flock to you. One thing that I am sure of is that you were aware of what you were to a lot of us, as we kept telling you that maybe even a little too much. I have no doubt in my mind that this unexpected loss left many people heartbroken.

I don’t want to think that world is a darker place now, but to appreciate the light you brought into it, and hope that some parts that made you brushed onto me. Even though it has been too long since our weekly pub meetings, I had no doubt in my mind that the Indian and the Serbian will have a beer again in some other country.

You will be missed,

I know Leela since last 10 years from my PhD work at Weizmann Institute of Science (2012-2016). He was my close friend and elder brother to me who would help at any need irrespective of whether it is science or personal. I met Leela first time in cricket in 2013 on a regular Friday afternoon (next to clore garden) when we all used to play cricket and enjoy the rest of the evening with cooking Indian food at Leela’s apartment. His passion towards any sports is highly commendable. Later on, he also joined the cricket club in Lod, Israel and we together played few times on behalf of Indian Embassy in Tel Aviv. In spring 2014, both of us completed a challenging hiking trail (from Mediterranean Sea to Sea of Galilee) or called ים אל ים (in Hebrew) around 120 km in 4 days exploring the nature in the Northern part of Israel.

His sudden demise is shocking to me and I still cannot believe it. He was a great person with a warm heart and was helpful to anyone right from the first meet. Leela was an excellent scientist and I have learned many things with Leela about science and life. At the Weizmann Institute, we won the inter-university cricket tournament under his leadership and he kept all of us united until today. He is unforgettable and his memory will remain with us. May his soul rest in peace and his family will get some strength. 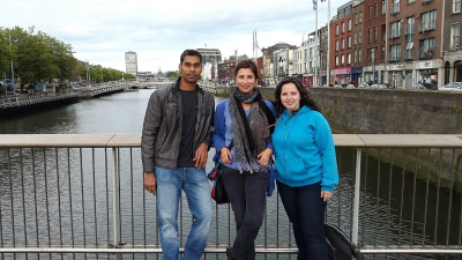 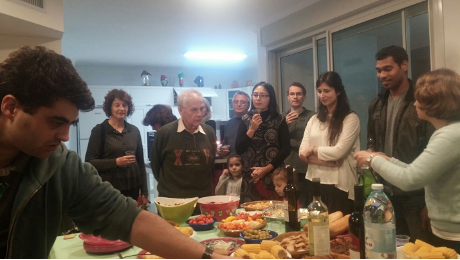 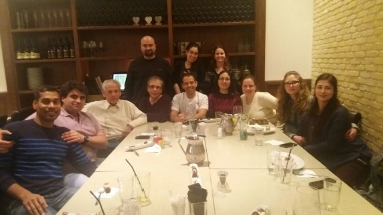 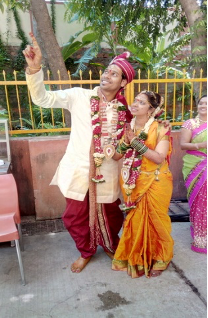 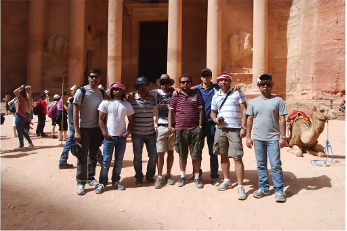 Leela and friends from the Institute in Petra (2015) 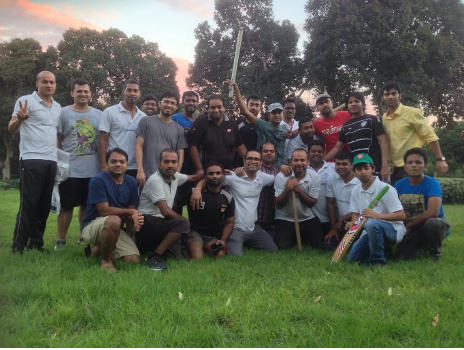