The Weizmann Institute has an active program in archaeology that integrates tools and methods from chemistry into the study of archaeology, toward a better understanding of history and the development of human societies.  Among the seminal discoveries that have emerged from the Scientific Archaeology Unit is the dating of a s skull found in the Manot Cave, a natural limestone formation in Israel, which had been sealed off for some 15,000 years. The 55,000-year-old Manot Cave partial skull is the first conclusive evidence of a human residing in the region at the same time as Neanderthals.

In another notable discovery using microarchaeology techniques at the excavation of Qesem Cave, an archaeological site near present-day Rosh Ha’ayin, archaeologists helped provide the earliest evidence—daring to around 300,000 years ago—of unequivocal repeated fire building over a continuous period.

Work in the Scientific Archaeology Unit is centered around the Helen and Martin Kimmel Center for Archaeological Science. One of the hallmarks of the Unit is its emphasis on micro-archaeology and other highly advanced dating methods. Much of this work is carried out in the Dangoor Research Accelerator Mass Spectrometry (D-REAMS). 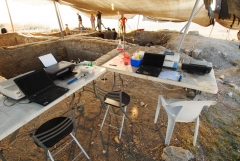