To understand how genes work, scientists need ways to control them. Changing genes in living cells is not easy, but a new method has been developed recently that makes it possible to make specific changes in the DNA of humans, other animals, and plants.

The technology, called CRISPR, is not only faster and easier than any previous technique for modifying DNA - it is radically changing the way basic research is conducted. Advances in CRISPR technology recently achieved by Weizmann Institute scientists give a hint of just how far the CRISPR revolution may yet go.

Early efforts to harness CRISPR - a gene-editing mechanism that occurs naturally in bacteria - focused on using it to improve industrial processes such as the production of yogurt. But according to Prof. Rotem Sorek, who uses CRISPR in his research, CRISPR’s potential applications are as vast as the human imagination.

“The discovery of CRISPR is probably one of the next Nobel prizes,” he says.

Illustrating CRISPR’s dramatic impact, a group of Chinese researchers recently launched a first-in-human CRISPR trial in late-stage lung cancer patients, using the system to engineer cells of the immune system so that they selectively target and destroy tumor tissue. This experimental addition of CRISPR to the medical toolbox raises fascinating questions: Will CRISPR-ized cells one day be used to cure cancer and other genetic conditions like cystic fibrosis and Tay Sachs? Will it allow us to enhance human intelligence at the embryonic stage? And what about the safety testing needed to prevent the rare yet significant occasions when CRISPR gene editing goes "off-target" - which, in humans, might endanger human health? Only time will tell.

From bacteria to applied biotechnology

CRISPR mimics a system used by bacteria to protect themselves from infection by viruses. It is based on an enzyme called Cas9 whose outstanding feature is that it can cut DNA at specific points. It does this by forming a complex with “guide” RNA produced naturally by bacteria to match the nucleic acid sequence of the invading virus. When this complex finds its target within the viral genome, the enzyme cleaves the target DNA, disabling the virus.

Over the past few years, researchers realized that this gene-editing system could be engineered to cut not only viral DNA, but any DNA sequence, by engineering guide RNA to match a particular target. And this can be done not just in a test tube, but also within the nucleus of a living cell. Scientists around the world are currently using the system to “crop out” specific sections of the code in order to identify gene function. Even more dramatically, they are using CRISPR to replace mutant genes with healthy copies, by “pasting in” another piece of DNA that carries the desired sequence.

In humans, safety testing involves investigating this process, because on rare occasions, Cas will target the wrong DNA, which can lead to potentially lethal autoimmune diseases.

Since the mapping of human DNA with the Human Genome Project, various methods of gene editing have been developed. But unlike previous methods, CRISPR can be used to target many genes at once - a big advantage for studying complex human diseases like Alzheimer’s or cancer, which are caused not by a single mutation but by many genes acting together. It is also a powerful, practical tool for plant sciences, making it possible to quickly customize crops according to exacting criteria.

Pursuing very different projects, two senior researchers at the Weizmann Institute have established themselves as world leaders in the CRISPR revolution, by unlocking this technology’s potential for improving agricultural crops and for fighting human disease. As an investor, Steven Romick talks a lot about “inflection points”—those critical moments when an infusion of funding will make all the difference, providing a tipping point toward success. When deciding recently, with his wife Eden, to support the professorial chair of Prof. Ido Amit of the Department of Immunology, he took the same approach. 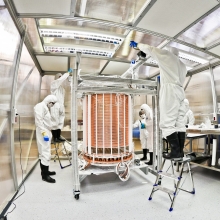