Biophysics and gaining ‘a wider view’ of science

It is here that he started his journey into a new scientific field and where his baby daughter took her first wobbly steps.

A faculty member of the Department of Material Science and Technology at the Nagaoka University of Technology and a rising star in Japan’s scientific community, Prof. Fujii has spent the last two decades studying various topics concerning soft matter physics. He is particularly interested in the rheology of liquid crystals—that is, the relationship between the pressure exerted on a liquid crystal and the resultant deformation. This topic intrigues him because there has yet to be formulated a physical law or principle regarding how liquid crystals flow.

Liquid crystal rheology is of great interest to industry because the potential applications are numerous. Prof. Fujii explains: “If you push the liquid crystal, it will deform and make a temporal defect, leading to strange patterns or phenomena, which present problems to manufacturers. I study how the defects correlate with this kind of strange phenomena, a basic research topic with an eye to application.”

From physics to biophysics

His interests in recent years, however, have shifted to the world of living matter. The desire to gain the tools to enable him to switch from soft matter physics to biophysics prompted him to take a sabbatical at the Weizmann Institute. Here, he is learning the secrets of the trade from Prof. Michael Elbaum, another physics-to-biophysics convert. Prof. Elbaum studies the various biophysical properties of protein transport mechanisms within cells.

“I was interested in coming to Israel because it is far from Japan and it is also a crazy island of sorts. We don’t get enough information about Israel in Japan; all you hear about are the bad aspects, like war and missiles flying, but it is also known for its many excellent scientists,” he says. “Yet when it comes to the science, we can read articles but it is hard to get information about the researchers themselves—such as how they do their research—so I thought to myself, ‘Let’s go to Israel.’”

In his plunge into the world of the cell, Prof. Fujii has chosen to study one of the key issues in cell biophysics: protein movement. When viewed from a physical perspective, proteins are minute particles somewhat suspended in a large container filled with a gel-like medium. Their movement in the cell is a random motion resulting from their collision with the gel’s atoms and molecules, combined with occasional motions driven along protein tracks by tiny molecular motors. These movements expose the nature of the surrounding medium. Is the cell viscous, like honey, or bouncy, like gelatin? By careful analysis of movies made through the microscope, Prof. Fujii can extract information regarding the viscosity and elasticity of the cell itself, which is what he is striving to accomplish in Prof. Elbaum’s lab. Much of his time is spent learning relevant biophysics techniques and basic concepts in the field.

“From the first Skype conversation, we immediately found a common language,” notes Prof. Elbaum, who has always looked forward to scientific contacts in Japan, an interest he attributes to his mother, who grew up there and still speaks Japanese. “It was very easy to come up with projects of interest to both of us and to make good use of the resources of the lab. It is a pleasure to host Shuji, and I do expect we will stay in touch.”

Prof. Fujii greatly values his time on campus. “The Weizmann Institute is a wonderful place, and I enjoy working with Michael, who has an open mind and is always willing to discuss new research proposals,” he says. He is particularly amazed by the Institute’s strong network of donors and tradition of philanthropy, a rarity in Japan’s government-funded higher education system. “I think that philanthropy is a good thing, because total governmental control may potentially restrict scientific progress by directing it to certain areas of science. The advantage in gifts is that they enable flexibility and greater cooperation with other researchers, allow research to be more active, and promote progress.”

Prof. Fujii’s wife, Chiemi, has also taken full advantage of the Weizmann Institute campus. During her strolls with their daughter, Mahoro, on the campus lawns, she has made friends with other mothers of newborns, which has resulted in many dinner invitations. The family has also traveled around Israel. For Prof. Fujii, his stay at the Weizmann Institute has opened his mind: “My impression is that in Japan, you focus very narrowly on your topic whereas in Israel one can ‘see’ much more - Israelis have a wider view of science. I definitely want to continue to collaborate with scientists at the Weizmann Institute and keep in touch.” 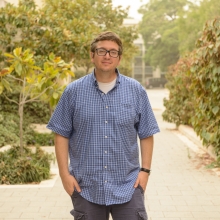 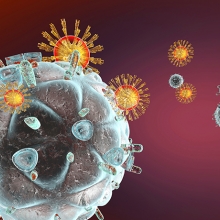 Viruses are biological hijackers. And as the coronavirus pandemic shows, a successful virus can be very dangerous indeed. Dr. Noam Stern-Ginossar studies how viruses dominate an infected cell.