The department of Brain Sciences has more than 20 research groups studying different levels of brain function, design, and pathologies. These studies rely on multidisciplinary cutting-edge methodologies, ranging from molecular biology and genetics, to electrophysiology (in vitro and in vivo), behavioral analysis, functional imaging, virtual reality, and computational modeling.

We investigate how neural circuits function and guide behavior, how we learn and what we remember, sensory perception and processing, navigation, group behavior, cortical organization, neural coding, synaptic and circuit dynamics, neural plasticity, emotions, neuromodulation, regeneration, and more. Our scientists are conducting studies on a variety of species ranging from worms, through rodents and bats, to humans.

Part of the faculty of biology, the department has over 100 graduate students and postdocs from multiple fields, including biology, computer sciences, physics, mathematics, chemistry, medicine, psychology, and engineering. They are performing highly integrative and interdisciplinary research in a stimulating intellectual atmosphere, using research facilities that are among the most advanced available, and closely interacting with other top research institutions worldwide. 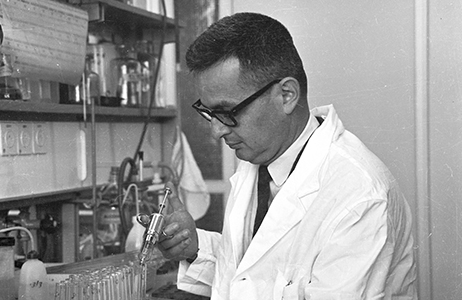 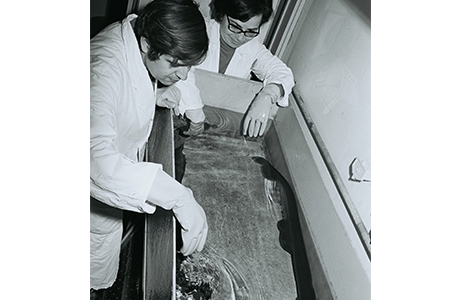 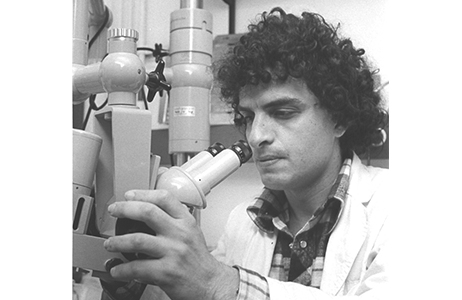 The Department of Brain Sciences owes its beginnings to two parallel initiatives implemented at the Weizmann Institute in the late 1960's and early 1970's. They reflected contemporary conceptual and methodological developments in biology and experimental psychology. The molecular biology revolution, together with concomitant advances in membrane biochemistry, electrophysiology, and computer sciences, triggered a marked shift in the scientific approach to brain and behavior. The two local harbingers of the new era in neuroscience were the late Uriel Littauer and the late David Samuel. Littauer, a molecular biologist who witnessed the early days of molecular biology first hand, contemplated applying the same approach and methodology that had succeeded admirably in deciphering the genetic code and protein synthesis to studying fundamental aspects of neural function. In the late 1960's, Littauer, who crafted his ideas during a sabbatical at NIH, established a modest neurochemistry unit within the Department of Biochemistry. His interests coincided with those of his younger colleague, Israel Silman, who had just returned to the Department of Biophysics at the Weizmann after performing postdoctoral research at Columbia University on the cholinergic system. Together with their students and several new recruits from abroad, and guided by a conceptual framework that the key to the brain is its molecules, in the mid-1970s they molded the nucleus of a new and independent Department of Neurobiology, in the Ullman Building. A few years later the Department moved to a dedicated research area in the newly constructed Meyer Building.

In parallel, David Samuel, a physical chemist by training (and the only genuine Viscount that the Weizmann ever had on its faculty), became fascinated with the possibility of applying isotopes to imaging the brain, and to using this approach to identify brain substrates of behavior. In 1966, upon returning from a Sabbatical at Berkeley, where he had co-authored a Science paper on brain and behavior, he received the first funding ear-marked for brain research at the Weizmann. He used this funding to establish a brain research unit in the Department of Isotope Research, within the Faculty of Chemistry. To the tissue cultures, rats, electric eels and fruit flies studied in the Neurobiology Department, Samuel and his young recruits added not only more rats in a maze, but also amphibians and primates. Whereas the initial focus of the Neurobiology Department was molecular and cellular neuroscience, that of the group in the in the Department of Isotope Research, which moved to the Perlman Building in the early 1970s, was in circuit and systems neuroscience, as well as in experimental psychology.

In the mid 1980s, in line with the recommendations of a committee appointed by the late Aryeh Dvoretzky, President of the Weizmann during 1986-1989, a decision was taken to select brain sciences as one of two flagship research areas (the other being submicron research within the Physics Faculty). This "big science" policy was adopted, and energetically expanded and executed, by Haim Harari, who succeeded Dvoretzky as President. In brain research, this involved merging of the aforementioned brain research unit into the Department of Neurobiology, followed by systematic recruitment, creation of the first Brain Research centers, remodeling of the Yaglom Building, and, finally, by construction of the Arison Building. This culminated in the current physical facilities of the Department of Neurobiology, in the interconnected Arison, Yaglom/Benoziyo, and Leonesco buildings, to which in the 1990s the fMRI facility was added. This resulted in a larger, bustling department, which combined molecular neurobiology with systems neuroscience, catalyzed over the years by the influx of a series of outstanding recruits, who brought to the department additional cutting edge methodologies and further expanded the spectrum of research projects at the forefront of neuroscience.