The hypothesis of closed-loop perception (CLP) 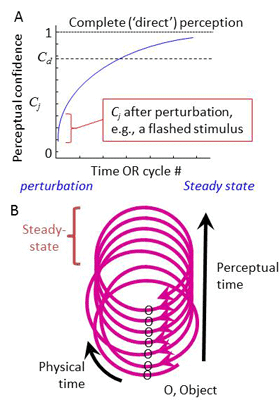 In our current working hypothesis the perception of external objects is a closed-loop dynamical  process encompassing loops that integrate the organism and its environment and converging towards organism-environment steady-states. We call this process closed-loop perception (CLP).

CLP thus suggests that perception of the external environment is a process in which the brain temporarily ‘grasps’ external objects and incorporates them in its motor-sensory-motor (MSM) loops. Such objects become virtual components of the relevant loops, hardly distinguishable, as long as they are perceived, from other components of the loop such as muscles, receptors and neurons. What primarily distinguishes external objects from body parts are inclusion duration and state; short and transient inclusions mark external objects while long and steady inclusions mark body parts.

Interestingly, the perceptual dynamics suggested by this hypothesis reconciles a conflict between objective scientific observations and the subjective everyday experience of perceiving objects with no mediation. Everyday perception of a given external object, CLP suggests, is the dynamic process of inclusion of its features in MSM-loops. This process starts with a perturbation, internal or external, and gradually converges towards a complete inclusion - approaching, although never reaching, a state of “direct” perception. A laboratory-induced flashed stimulus, according to this model, probes the initiation of a perceptual process, whereas dreaming and imagining evoke internal components of the process.

During exploration, whisker movements are mainly along the horizontal plane. Upon contact with an object (blue dot) the timing of the contact response (latency to spikes) encodes the horizontal dimension (red). The vertical dimension (blue) is encoded by the identity of contacting whiskers. The radial dimension (green) is encoded by the intensity of activation (e.g. rate of evoked spikes) due to bending and mechanical forces acting upon whisker shaft. These three codes for location are orthogonal and the spatial dimensions can thus be encoded independently of each other. During natural viewing, the eyes are never still. Even during fixation, miniature movements of the eyes move the retinal image across tens of foveal photoreceptors. Most theories of vision implicitly assume that the visual system ignores these movements and somehow overcomes the resulting smearing.

Here we present a hypothesis for vision, in which coarse details are spatially-encoded in gaze-related coordinates, and fine spatial details are temporally-encoded in relative retinal coordinates. The temporal encoding presented here achieves its highest resolution by encoding along the elongated axes of simple cell receptive fields and not across these axes as suggested by spatial models of vision. According to our hypothesis, fine details of shape are encoded by inter-receptor temporal phases, texture by instantaneous intra-burst rates of individual receptors, and motion by inter-burst temporal frequencies.

We further describe the ability of the visual system to readout the encoded information and recode it internally. We show how reading out of retinal signals can be facilitated by neuronal phase-locked loops (NPLLs), which lock to the retinal jitter; this locking enables recoding of motion information and temporal framing of shape and texture processing. A possible implementation of this locking-and-recoding process by specific thalamocortical loops is suggested. Overall it is suggested that high-acuity vision is based primarily on temporal mechanisms of the sort presented here and low-acuity vision is based primarily on spatial mechanisms. Processing of sensory data acquired via eye movements requires the encoding of eye movements in the visual system. We hypothesize that this is achieved at a high resolution by the symmetric simple cell receptive fields (ssRFs) identified in the visual cortex. Based on empirical data ssRFs are assumed to be tuned for responding to movements along their long axis at typical FeyeM speeds (~1 – 10 deg/s, orange), and to movements across their long axis at lower or higher velocities (black) (the inh-to-ex delays corresponding to a single-cone flank of 0.5 arcmin are denoted below the speed values). Our findings of temporal-to-rate code transformations in the paralemniscal system are consistent with a closed-loop operation of thalamocortical circuits that include cortical inhibition, cortical oscillatory neurons and thalamic gating. Based on in-vitro data it had been suggested that following a quiescent period, thalamocortical neurons shift to a hyperpolarized sensitive mode in which they faithfully relay sensory activations. This “relay” mode is consistent with the short-latency thalamic responses observed herein to the first stimulus cycle.

However, during subsequent stimulus cycles thalamic neurons are expected to shift into a gating mode, in which the same sensory activation is not sufficient for activating the thalamic neurons, i.e. additional depolarization is required. Such a depolarization can be induced by the other major input to these thalamic cells – the cortical feedback.

Thus, during on-going stimulations POm neurons, like other thalamic “relay” neurons, are assumed to function as AND gates, i.e. they should be active only when their two major inputs, from the brainstem and cortex, are co-active. When in this mode, the entire thalamocortical loop should function as a phase-locked loop.

Back to Research Overview