Visualization of the appearance of orientation patches in cat area 18 in response to a visual presentation of drifting gratings. The difference between the cortical responses to vertical and horizontal gratings is shown (differential maps). Time resolution: 10 msec.

Time-course of the “polar orientation maps”: color represents the preferred orientation of each pixel (ranging 0-180º from bottom to top of color-bar on right), and brightness represents modulation depth of its tuning curve (ranging 0-0.5 ‰ from left to right of colorbar). After peaking at 74 ms, map strength declines gradually to ~65%-maximal at 120 ms (not shown).

Lateral spread of activity in the barrel cortex

Visualization of the Spatio-temporal dynamics of the response to whisker C3 stimulation using a 3-msec air-puff. Initially activation is seen only in restricted area similar to the whisker representation in layer IV. (Temporal resolution 0.6msec. Average of 128 trials.)

Spread of activity from a single barrel

Surround inhibition in the barrel cortex 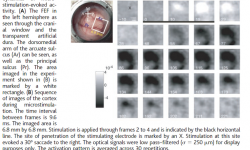 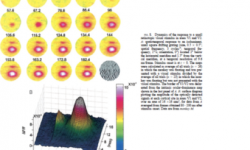 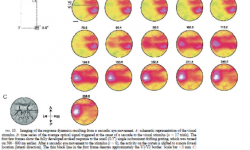 Time series of the average optical responses triggered at the onset of a saccade to the visual stimulus. The first few frames show the fully developed evoked response to the small (0.5 o ) single drifting grating, which was turned on 500 - 800 ms earlier. After a saccadic eye movement to the stimulus (t = 0), the activity on the cortex is shifted to a more foveal location (lateral) (n = 17 trials). The right panel shows the average eye movement during the imaging of cortical responses.
Data by Slovin et al, JNP 2002

The left panel displays an sequence of a single frame (10 msec snapshots, without averaging) from a movie showing the instantaneous cortical activity in the absence of stimulation (raw data; not processed). The time relative to the first frame is displayed in the center. Whenever a state that is significantly correlated with one of the orientation maps emerges, that orientation map appears on the right panel, its corresponding orientation is displayed by a bar in the center, and the correlation between the two frames is displayed over the left panel. When the maximal correlation for a state is reached, the movie pauses briefly.
Data by Kenet et al, Nature 2003

Small squares (cues) are presented at different locations followed by a bar.
All stimuli shown are flashed AND stationary. However, illusory motion is perceived drawn away from the cue locations to form the full bar.