Superfluids are known to display many spectacular properties, such as the fountain effect and rolling films, which are unique to quantum hydrodynamics. Ever since the discovery of superfluids, it was conjectured that their hydrodynamics can be described as two interpenetrating fluids with two different velocities vs (superfluid component) and vn (normal component). In superfluid 3He-B, because of the high kinematic viscosity of 3He (comparable to that of olive oil), the normal component can usually be considered at rest with respect to the superfluid component and the turbulence is carried predominantly by the superfluid component. To explore the statistical properties of this quantum turbulence and its differences from the classical counterpart, we adopt the time-honored approach of shell models. Using this approach, we analyzed the stationary energy spectra of superfluid turbulence E(k) at scales larger than the intervortex distance. We have found the critical behavior of the energy spectra. The transition from subcritical to supercritical energy spectra is controlled by the dimensionless parameter γ instead of the more experimentally accessible mutual friction parameter α. For critical value of γcr, the energy spectrum is proportional to k-3. For smaller values of γ E(k) has K41 tail with k-5/3, while for γ larger than the critical one, the spectrum terminates at final k. The transition from the critical to the sub- or supercritial behavior occur at final k.
These results are in qualitative agreement with analytical expressions for the superfluid turbulent energy spectra that were found using a differential approximation for the energy flux. 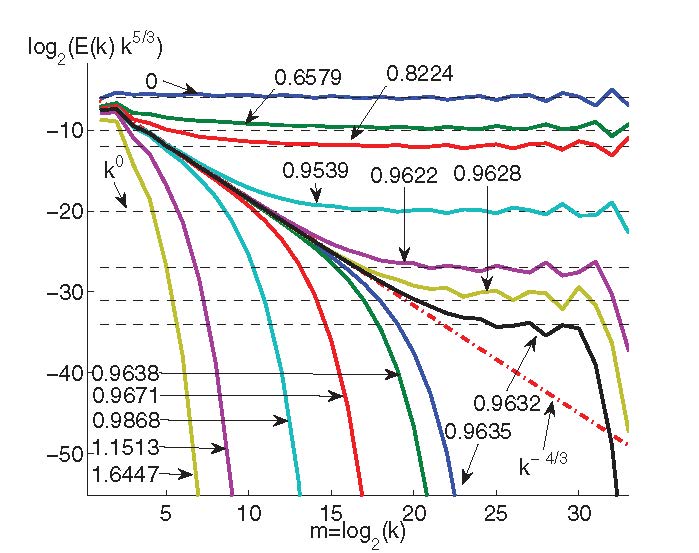 Numerical results for the energy spectrum in the Sabra shell model for different values of  γ.