Minimal quantum heat machines
One of our main targets is to realize the minimal and simplest thermal machines in the quantum domain. These may be conceived as (figure 2) quantized (harmonic-oscillator) 'piston' that couples to a single qubit acting as either a quantum heat engine (QHE) or quantum refrigerator (QR) on spectrally non-flat baths.

Fig 1. Cartoon of the 'world's simplest and smallest' universal heat machine acting as heat engine (left) or refrigerator (right). It is comprised of a qubit that constantly interacts with two baths at different temperatures. Concurrently, it is driven by an oscillator that off resonantly modulates (by periodic Stark shifts) the qubit resonance frequency. The modulation rate determines whether the qubit will act as a heat engines or refrigerator.

We contend that a periodically-modulated control qubit coupled to both baths is a minimal model for QHE and QR (figure 3). It is remarkable that such a simple model allows for both QHE and QR actions.

about the qubit frequency ω0 and with modulation frequency (rate) Ω, and thereby extracts work (at expense of the hot bath) in the heat-engine regime, or provides work (in order to cool down the cold bath) in the refrigerator regime, depending on Ω. 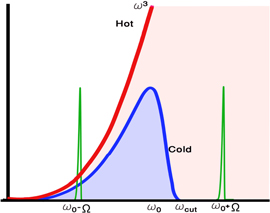 Fig 4. Performance of the universal heat machine depicted in figures 2-4 (under the assumption that the spectra of the two baths are non-overlaping (separated)). The efficiency is plotted as a function of the modulation rate Ω. The efficiency in the heat engine regime rises with Ω up to the Carnot bound at  Ω=Ωcrit.  At higher Ω the machine switches over to the refrigerator regime with a coefficient of performance that decreases from the Carnot bound.

Third-law issues
The limits on cooling power and efficiency of this unconventional QR can serve to probe the validity of one of the formulations of the third law of thermodynamics by Nernst that prohibits the attainability of zero temperature in finite time. To this end, we explore the use of a single driven qubit simultaneously coupled to hot and cold spectrally non-flat baths. The possibility of cooling a bath down to arbitrarily low temperatures, i.e. cooling rate scaling with temperature, is thus a fundamental issue that reflects on the applicability of the third law. As a typical example we assume that the QR pumps heat into an infinite hot bath, and out of a cold bath whose heat capacity is finite   cV < ∞   resulting in   Tc=Tc (t).  Strikingly, we may show that arbitrarily low temperature may be reached at finite time (non-exponentially fast) by the heat pump, for an appropriate (magnon) cold-bath spectrum thereby challenging the third law.

As a rule, the tools of quantum thermodynamics and their application to cooling and work
extraction are based on long-time Markovian (Lindblad) master equations that describe steady convergence at equilibrium. By contrast, the understanding of non-Markovian, short-time effects in quantum thermodynamics is scanty at best. We investigate qubit cooling on arbitrary time-scales, without the Markovian constraint. Our major effort is oriented towards understanding the followign founational question:
Thermodynamic laws and bounds are not well understood for quantum-system manipulations . We challenge:
Thermodynamic equilibrium (First law?)
Carnot efficiency  bound of quantum heat engines/refrigerators (Second law)

It is clearly desirable to cool down or purify a qubit at the fastest rate possible to make it suitable for tasks of quantum information processing. The standard, straightforward way of cooling a system such as a qubit is by equilibrating this system with a cold bath. But can one cool qubits faster than their equilibration time?
Specifically, we have experimentally and theoretically demonstrated (in collaboration with L Frydman's group) the possibility of purifying a qubit coupled to a spin bath, by means of repeated noise-induced dephasing that mimics the effect of a non-selective (unread) measurements. We have shown (figure 1) that the qubit may be cooled down to a predetermined temperature that may be much lower than that of the bath by means of a suitable controlled dephasing rate, that conforms to the condition for the anti-Zeno effect (AZE). By contrast, a dephasing rate that corresponds to a quantum Zeno effect (QZE) leads to heating of the qubit. 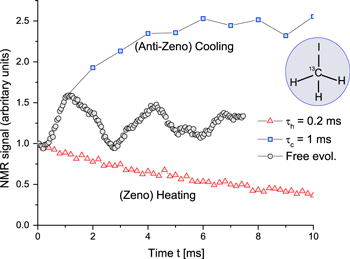 Fig 5. Experimental verification of Zeno heating for QND polarization measurements (at intervals τ=0.2 ms) and anti-Zeno cooling (at intervals τ=1 ms). Experimental setup: quantum system embodied by the nuclear spin of a carbon atom C is in contact with a bath embodied by the nuclear spins of 3 protons. Their off-resonant frequency mismatch is changed by the measurements, causing polarization decrease (heating) or increase (cooling) of C depending on the interval τ.