The Calculation of Reaction Probabilities and Rate Constants

It is generally believed that all molecular processes are ultimately governed by the laws of quantum mechanics. This includes the central event in chemistry --- a chemical reaction --- in which reactants come together, exchange partners and separate into products. The quantum mechanical theory for chemical reactions is called "scattering theory", and it is the underlying theory behind all chemical transformations.  In the 1990’s, the Tannor group developed a new mathematical expression for the scattering, or S- matrix, which is the central object in quantum scattering theory. The new expression is simple, conceptually appealing, and easily used for calculations. Subsequently, they combined this formulation of the scattering matrix with semiclassical wavepacket methods.  They obtained excellent agreement with full quantum calculations for the benchmark system, collinear H+H2 -> H2 +H, fulfilling a dream which had eluded workers in the field since 1970. The group has also developed an analogous procedure which allows the direct calculation of the cumulative reaction probability, which is closely related to the thermal rate constant for the reaction.  Current interests include the calculation of differential cross-sections as well as the cross section for collisions of ultracold molecules. 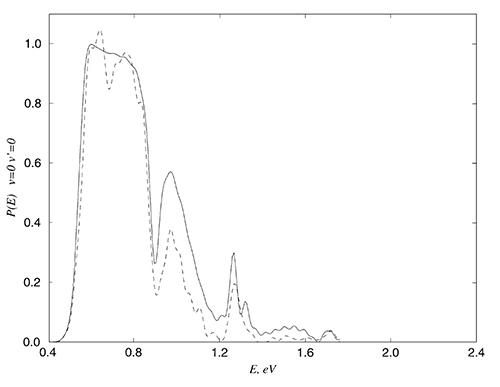