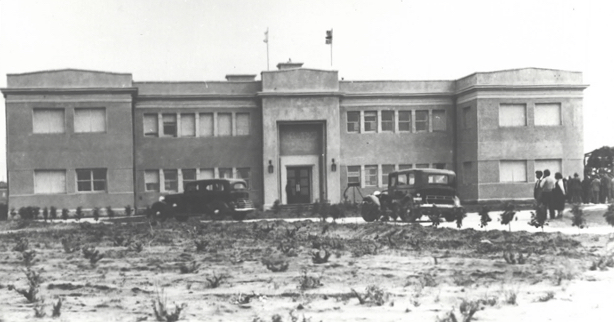 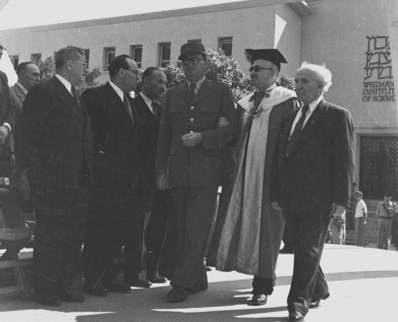 The inauguration ceremony with Weizmann and Ben-Gurion. Photo: Shlomo Ben-Zvi 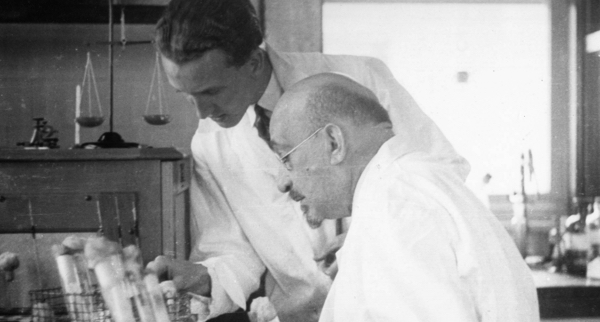 Haim Weizmann in his lab

Research at the Weizmann Institute’s Faculty of Chemistry addresses a very broad spectrum of scientific disciplines—encompassing organic chemistry, biophysics, structural biology, earth sciences, material sciences, quantum optics, magnetic resonance, and many others—and a wide range of scales, from the nanometric to the planetary.

The prolific research of Faculty of Chemistry members has yielded important discoveries and scientific milestones. Their work has been internationally recognized through awards, memberships in various academies and societies, and honorary degrees. Notable accolades include:

The 2009 Nobel Prize in Chemistry was awarded to Faculty member Ada Yonath (together with Venkatraman Ramakrishnan and Thomas A. Steitz) for solving the structure of the ribosome.  It was also under the auspices of the Faculty of Chemistry that the laureates of the 2013 Nobel Prize in Chemistry, Michael Levitt and Arieh Warshel, began their scientific collaboration in the 1960s.

The prolific research of Faculty of Chemistry members has yielded important discoveries and scientific milestones. Their work has been internationally recognized through awards, memberships in various academies and societies, and honorary degrees. Notable accolades include:

The Wolf Prize in Chemistry was awarded to Faculty members Ada Yonath (2007) and Meir Lahav and Leslie Leiserowitz (2021).

The Faculty of Chemistry boasts an impressive track record of scientific innovation and transformative contributions to chemistry and other fields, with its founding members setting the standard for all those who followed.

Among them was Shneior Lifson, whose most well-known achievement is the development of the consistent force field method, which makes it possible to compute the forces operating among various atoms. One of the major theories behind 3D computer modeling of large molecules, this method opened the way to characterizing the structure and dynamics of biological molecules and, eventually, to a breakthrough in understanding protein folding and diseases caused by defective folding. Lifson was also the mentor of Nobel Prize laureates Arieh Warshel and Michael Levitt during their formative time at the Weizmann Institute.

During his time as Head of the Department of Organic Chemistry, Franz Sondheimer conducted seminal work on the chemistry of annulenes and provided proof of Hückel’s rule, which until then had been only a theoretical conjecture, with far-reaching implications for the entire field of organic chemistry and, in particular, the chemistry of aromatic materials.

Gerhard M. J. Schmidt founded the field of topochemistry, which, as Schmidt defined it, concerns “the course of certain types of solid-state reactions [that] are determined by the geometry of the reaction lattice.” He also coined the term crystal engineering, a field devoted to the design and synthesis of molecular solid-state structures with desired properties, based on an understanding and use of intermolecular interactions.

Saul Meiboom and his student Shlomo Alexander conducted pioneering work on the quantum interpretation of spin-spin couplings and their influence on NMR spectra, showing the potential of NMR to study the nature and kinetics of chemical reactions. Among their many other landmark discoveries was the phenomenon of double quantum effects in NMR.
These early notable scientific accomplishments, which continue to bear their mark on chemistry, were followed by many more achievements by members of the Faculty of Chemistry, as can be gleaned from the Weizmann Institute publication 100 Milestones in Chemistry Research at the Weizmann Institute of Science.

The organizational and scientific evolution of the Faculty of Chemistry

The Faculty of Chemistry’s current interdisciplinary composition is the outcome of an evolutionary journey, which began at the Weizmann Institute’s forerunner, the Daniel Sieff Research Institute.

In fact, chemistry was the first field of research at the Sieff Research Institute, which was founded in 1934 by Israel and Rebecca Sieff of the UK, in memory of their son. The driving force behind its establishment was the Sieff Institute’s first president, Dr. Chaim Weizmann (1874-1952), a noted chemist who was also the leading figure of the Zionist movement in the early 20th century, and who would go on to become the State of Israel’s first President.

Initially, the Sieff Institute housed two main branches of research, organic chemistry and biochemistry. A good deal of its research concerned the use of natural and agricultural products—citrus, dairy, silk, and tobacco—as well as the synthesis of chemical compounds of medical value and petroleum products.

During World War II, the Institute’s scientific staff adapted their research to address pressing needs—turning their efforts to the production of the quinine substitutes Atabrine and Plasmoquine for treating malaria, which plagued the population in Palestine and the Allied Troops serving in the region at the time. Another drug to come out of Sieff Institute labs was the barbiturate-based painkiller Evipan (hexobarbital).

The war of Independence started in 1947 and significant effort was directed to the nascent country’s military needs. The scientific branch of the Israel Defense Force, HEMED, used the Sieff Institute’s chemistry facilities, and many of the members of the unit concurrently conducted their research at the Sieff Institute.

On November 2, 1949, the Daniel Sieff Research Institute officially became the Weizmann Institute of Science, in honor of Dr. Weizmann’s 75th birthday. Within a decade, the two original research branches expanded into nine research departments and units. Of these, six formed the core of what would evolve to become the Faculty of Chemistry:

In the 1950s, Nobel Laureate Felix Bloch, who at the time was a member of the Weizmann Institute’s Board of Governors, persuaded the Institute to establish on campus a research facility dedicated to nuclear magnetic resonance (NMR), a field then in its infancy. This led to the construction of one of the world’s first NMR spectrometers, championed by Saul Meiboom and his student Shlomo Alexander. It was an ingenious machine, cobbled together out of electronic equipment left behind by the British army, for the purpose of peering into a multitude of materials.

Members of the Faculty of Chemistry were actively involved in the founding of Yeda Research and Development Company, the Weizmann Institute’s commercial arm, which was inaugurated in 1958. Yeda continues to play a pivotal role in commercializing the unique intellectual property developed by Weizmann Institute scientists. The income generated serves to support further basic research and science education.

In 1962, the Department of Chemical Physics was founded, with Shneior Lifson as its first chair. Lifson also served as the Institute’s Scientific Director from 1962-1966.

In 1967, the Department of Organic Chemistry was merged with the X-ray Crystallography Department and Photochemistry unit, and was renamed the Department of Chemistry. Gerhard M. J. Schmidt became its first chair (Schmidt also served as the Weizmann Institute’s Scientific Director between 1959-1961 and again between 1969-1971).

The Institute’s various departments were organized for the first time under faculties in the late 1960s, and Gerhard M. J. Schmidt became the Faculty of Chemistry’s first Dean.

During Lifson’s tenure as the Faculty’s dean, a unit of Chemical Services was founded as a centralized research resource facility for the Faculty. Over the years, the unit has expanded into the Department of Chemical Research Support, providing access to a wide variety of state-of-the-art instrumentation, routine analyses, training and consultation to all Institute researchers, and served as a model for the formation of similar units in the Institute’s other departments.

The year 1990 saw a major restructuring of the Faculty, with scientists from a number of departments combined in more homogenous groups with more closely related areas of interest. Itamar Procaccia became the first Dean of the reorganized Faculty, which consisted of the departments of Chemical Physics, Environmental Sciences and Energy Research, Materials and Interfaces, Organic Chemistry, Structural Biology and Chemical Research Support.

Following a second restructuring, in 2021, the Faculty of Chemistry assumed its current organizational structure. With Yinon Rudich as its dean, the Faculty now consists of five departments: Chemical and Biological Physics, Chemical and Structural Biology (formerly Structural Biology), Earth and Planetary Sciences, and Molecular Chemistry and Materials Science (merging the former Departments of Organic Chemistry and Materials and Interfaces) and Chemical Research Support.

Deans of the Faculty of Chemistry