Biogenic crystals are abundant in both the plant and animal kingdoms. Often, these can have an optical function. Together with the groups of Profs. Lia Addadi and Steve Weiner we have been studying some of these systems using a combination of structural and optical characterization tools. More recently, we have been studying their development in zebrafish with Prof. Gil Levkowich.

Anhydrous guanine crystals form some of the most efficienct natural dielectric reflectors, and are responsible to the reflectivity of fish scales as well as to that of various marine organisms. The intricate relation between the structure (and particularly the local order) and the optical properties of these is studied using correlated optical and cryo-SEM measurements, and shows how well-designed these biological reflectors are. You can get an idea about the richness of guanine-based reflectors from the following reflectance image of a Sapphirina Metallina copepod. 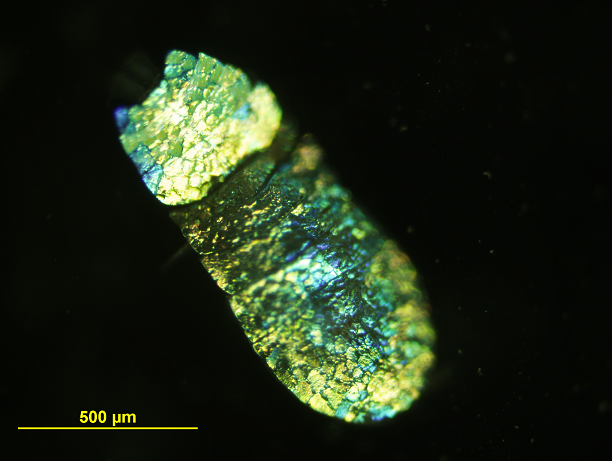 Some of the most sophisticated biogenic crystal constructs can be found in the visual systems of marine animals. Due to the low index contrast between the fluid inside the eye and water ourside it, some marine animals have developed visual systems which rely heavily on reflection rather than on refraction. We have recently studied the eyes of scallops, of crayfish and of zebrafish, where diverse functional roles are taken by biogenic crystals and unique optical structures, such as highly birefringent spherulite opals, never studied previously in an artificial context, can be found. For more information, see our review paper on this topic [6]. In parallel, we have been studying the beneficial effects of inorganic leaf inserts on photosynthsis.