One of the most fundamental questions in science is the attributes of the dark matter (DM), that accounts for over 80% of the matter in the universe. There is overwhelming observational evidence that dark matter exists, and convincing theoretical arguments that it is made of one or several new elementary particles. The properties of these particles are not known yet, and revealing their existence would have far-reaching implications for particle physics, astrophysics and cosmology.

Besides its deep involvement in the XENON experiment at LNGS (Italy), the WIS team is part of another large international collaboration DARWIN (DArk matter WIMP search with Noble liquids). It aims at the development of the ultimate underground-based multi-ton scale direct dark matter detection observatory, with xenon and/or argon as target media for the dark matter particles. 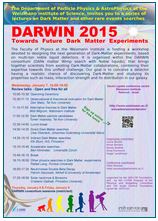 The DARWIN facility will provide the ultimate sensitivity for detecting and possibly characterizing galactic dark matter. The DARWIN collaboration brings together extensive collective experience of European researchers in the fields of DM detection with noble liquids (the ArDM, DarkSide and XENON collaborations) and neutrino physics, with the common goal of producing a viable design for a third-generation DM observatory. This facility would be capable of probing the parameter space for DM particles over a wide range of particle masses down to interaction cross sections where the neutrino background, which is irreducible with currently available techniques, starts to dominate.

The WIS team will take part in numerous DARWIN activities; among them:

View the poster of our recent DARWIN meeting 2015 at the Weizmann Institute.