The realization in the latter part of the 20th century that many syntheses practiced on a large scale were detrimental to the environment led to a movement towards reshaping the science of organic synthesis. The problems are particularly acute in the area of oxidation chemistry. Thus, the approach taken in this research is motivated or “pulled” by societal considerations that demand environmentally benign and sustainable solutions that demand environmentally benign and sustainable solutions for oxidative synthetic transformations in organic chemistry; broadly speaking this means the selective oxidation of hydrocarbons such as alkanes, alkenes and aromatics and other functionalized organic compounds, for example alcohols or sulfides.

Previously much research has been carried out using hydrogen peroxide as a benign oxidant and in our laboratory using polyoxometalates as catalysts. However, since the synthesis of hydrogen peroxide itself is not an environmentally benign process, we have turned our efforts to combining in situ electrocatalytic oxidation of water in the presence of inorganic catalysts such as polyoxometalates as both heterogeneous and homogeneous electrocatalysts. A large variety of rection are of interest including alkene epoxidation, Baeyer-Villiger transformations and oxidative introduction of nitrogen atoms into hydrocarbons. 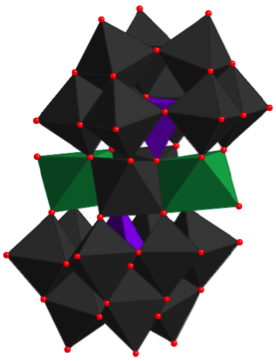 A polyhedral representation of a “sandwich” type polyoxometalate that catalyzes oxidation reactions.