Nuclear magnetic resonance (NMR) has established itself over the last decades as a valuable spectroscopic tool. It is capable of probing the microscopic environment in chemical and biological systems and is a non invasive imaging tool commonly used in the field of medicine and known as MRI. However, the main drawback of NMR and MRI is their inherently low signal to noise ratio (SNR) compared to other type of spectroscopies and imaging techniques. The reason for this is the small energy difference between the nuclear spin states when placed in a magnetic field. This energy difference depends on the magnetic moment of the nuclear spins and on the strength of the external magnetic field. Even with the strongest field currently available (23.5 Tesla), the magnetic energy levels populations, which depend on the temperature according to Boltzmann law, are almost equal at room temperature. This results in only minute population difference, called polarization, measured in parts per million (ppm).

One of the ways to overcome this SNR problem is by a process termed ‘dynamic nuclear polarization’ (DNP). In this technique the polarization of highly polarized electrons (magnetic moment 600 times larger than that of protons), found in (stable) organic radicals and several metal ions, is transferred to the surrounding nuclei and from them to the whole sample. DNP has already lead to new experiments unraveling chemical and biochemical processes practically invisible to NMR and its medical descendant, MRI. Many opportunities and questions can now be addressed with the huge gain in sensitivity which can be directed for structural studies of proteins, monitoring reactions on surfaces and medical relevant processes in-vitro and eventually in-vivo.

Although this approach was well known for over half a century (Overhauser, 1953), its applicability was limited, especially for use in modern high magnetic fields.

Only recently, combined with low temperatures, this phenomena was utilized in NMR of solids (by Griffin's group) and liquids (by Golman's group) resulting in high signal enhancements.

While the experimental design of DNP has improved dramatically in the last years, the theoretical understanding of the process has hardly changed. The research in our group is focused on developing theoretical models and tools for studying the DNP mechanism (mainly in the solid state). This is not a trivial question as it involves a many body system, including the electron and nuclear spins. Additionally, it is driven by coherent interactions (internal magnetic interactions between spins, as well as external with the magnetic field and microwave irradiation applied) and non-coherent relaxation effects. Details on several of the underlying mechanisms leading to DNP can be found in refs. [1-7].

Side by side with the theoretical effort, we study the solid state DNP experimentally. To this end we have built a combined NMR and EPR (electron paramagnetic resonance) spectrometer which is used to study the basic process of polarization transfer. In addition, we expect the pulsed EPR capabilities of our system to lead to the development of new experimental schemes for improved NMR signal enhancements. More details on our experimental are available in reference [8]. 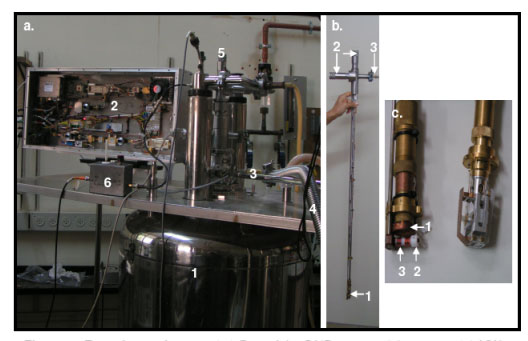 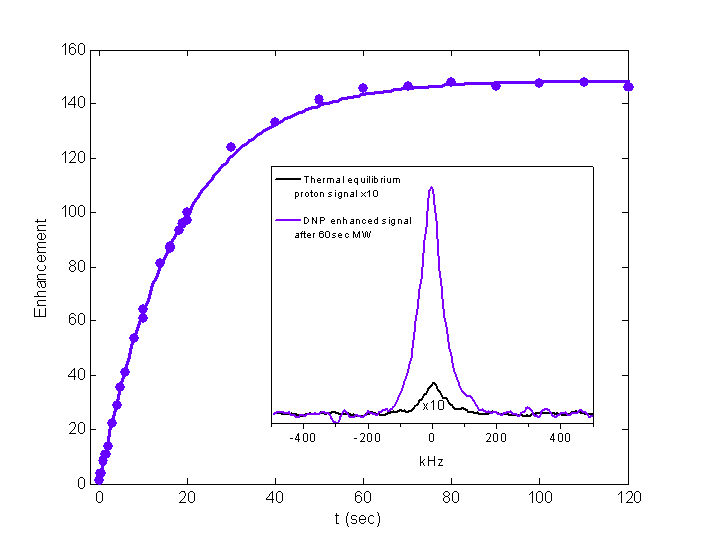