We originally proposed a new concept for the construction of designer cellulosomes, comprising recombinant chimaeric scaffoldin constructs and selected dockerin-containing enzyme hybrids. This arrangement serves to promote the synergistic action among enzyme components. In developing this objective, the CBMs of the native free enzymes are replaced with a dockerin (Figure 1), and chimaeric scaffoldins are designed to include multiple copies of cohesins of different specificities (Figure 2). This enables precise incorporation of complementary dockerin-containing components into the complex (Figure 3).

We are currently studying the assembly of other types of carbohydrate active-enzymes produced by this bacterium (such as xylanases) into designer cellulosomes, in order to enhance degradation of the hemicellulose component of the plant cell wall. Thus, we are able to combine both cellulases and hemicellulases (xylanases) into the same designer cellulosome, and examine the proximity effect among the different types of enzymes on the degradation of natural substrates (as straw). In doing so, we have succeeded in demonstrating that the close proximity between specific combinations of enzymes resulted in enhanced degradation of the complex polymer (Figure 5). 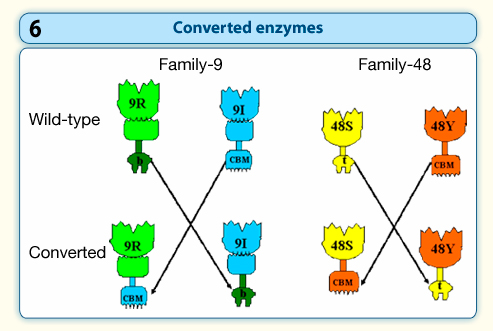 We are also using this approach to examine cellulosomal/non-cellulosomal interplay of prominent cellulases from Clostridium thermocellum. We have thus created converted chimeras by swapping the dockerin module of cellulosomal enzymes with a CBM module from their free enzyme analogue and vice versa (Figure 6). This enables us to study the importance of the targeting effect of the free enzymes by the CBM module, and the proximity effect between cellulases on the designer cellulosome.

The largest designer cellulosome that we have reported until 2012 was a chimaeric scaffoldin that contained 6 cohesins. This scaffoldin represented a technical limit of sorts, since adding another cohesin proved problematic, owing to resultant low expression levels, instability (cleavage) of the scaffoldin polypeptide, and limited numbers of available cohesin-dockerin specificities: the hallmark of designer cellulosomes. Nevertheless, increasing the number of enzymes integrated into designer cellulosomes is critical, in order to further enhance degradation of plant cell wall material. Recently, we have proposed an original strategy: the use of an adaptor scaffoldin which comprises an intermediate type of scaffoldin that can both incorporate various enzymes and attach to an additional scaffoldin. We constructed an efficient form of adaptor scaffoldin that possesses three type-I cohesins for enzyme integration, a single type-II dockerin for interaction with an additional scaffoldin, and a CBM for targeting to the cellulosic substrate. In parallel, we designed a hexavalent scaffoldin for connecting to the adaptor scaffoldin via an appropriate type-II cohesin. The resultant extended designer cellulosome comprised 8 recombinant enzymes – 4 xylanases and 4 cellulases – thereby representing a potent enzymatic cocktail for solubilization of natural lignocellulosic substrates 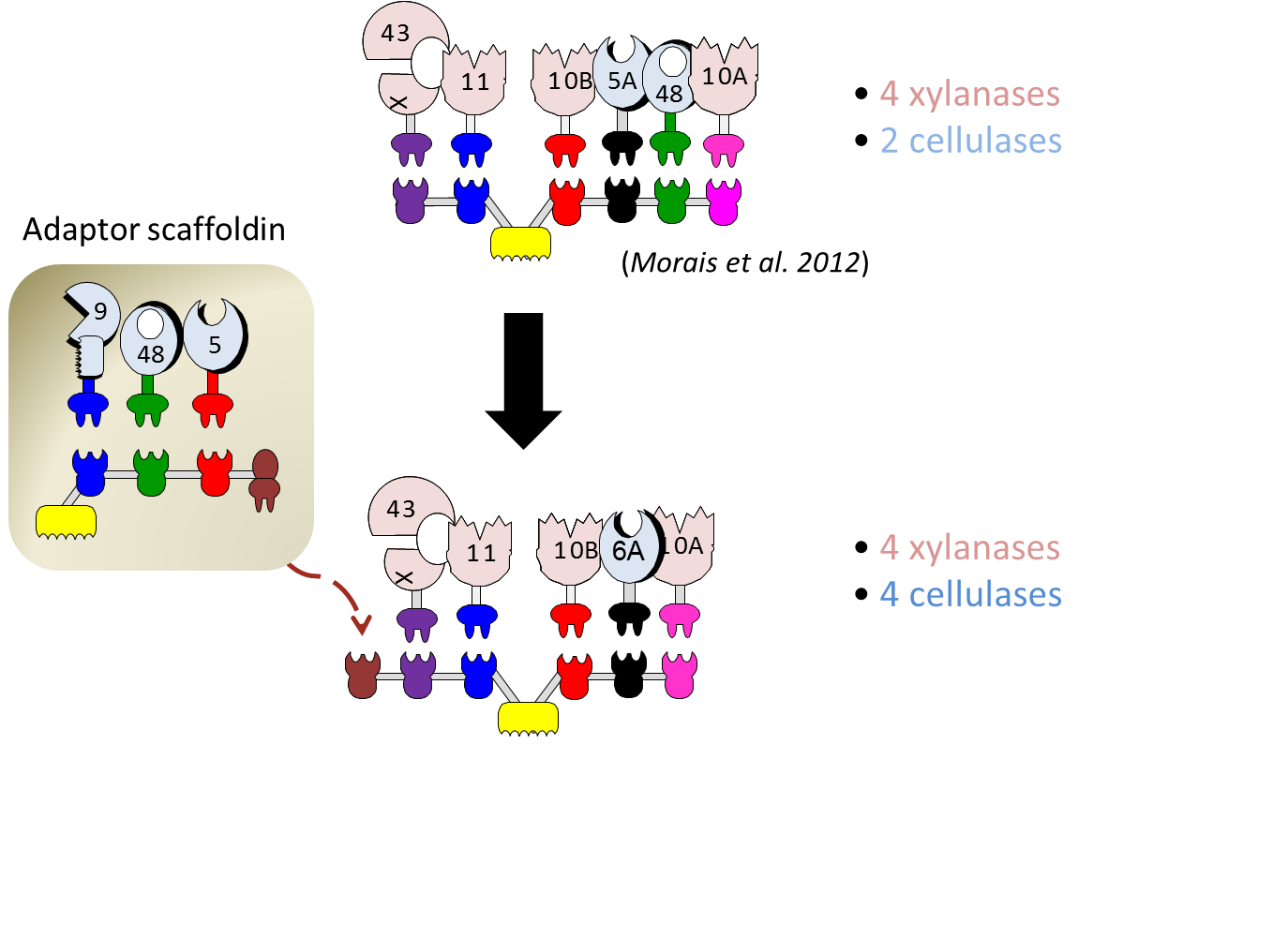 The contribution of the adaptor scaffoldin clearly demonstrated that proximity between the two scaffoldins and their composite set of enzymes is crucial for optimized degradation. After 72-h incubation, the performance of the extended designer cellulosome was determined to be approximately 70% compared to that of native cellulosomes. 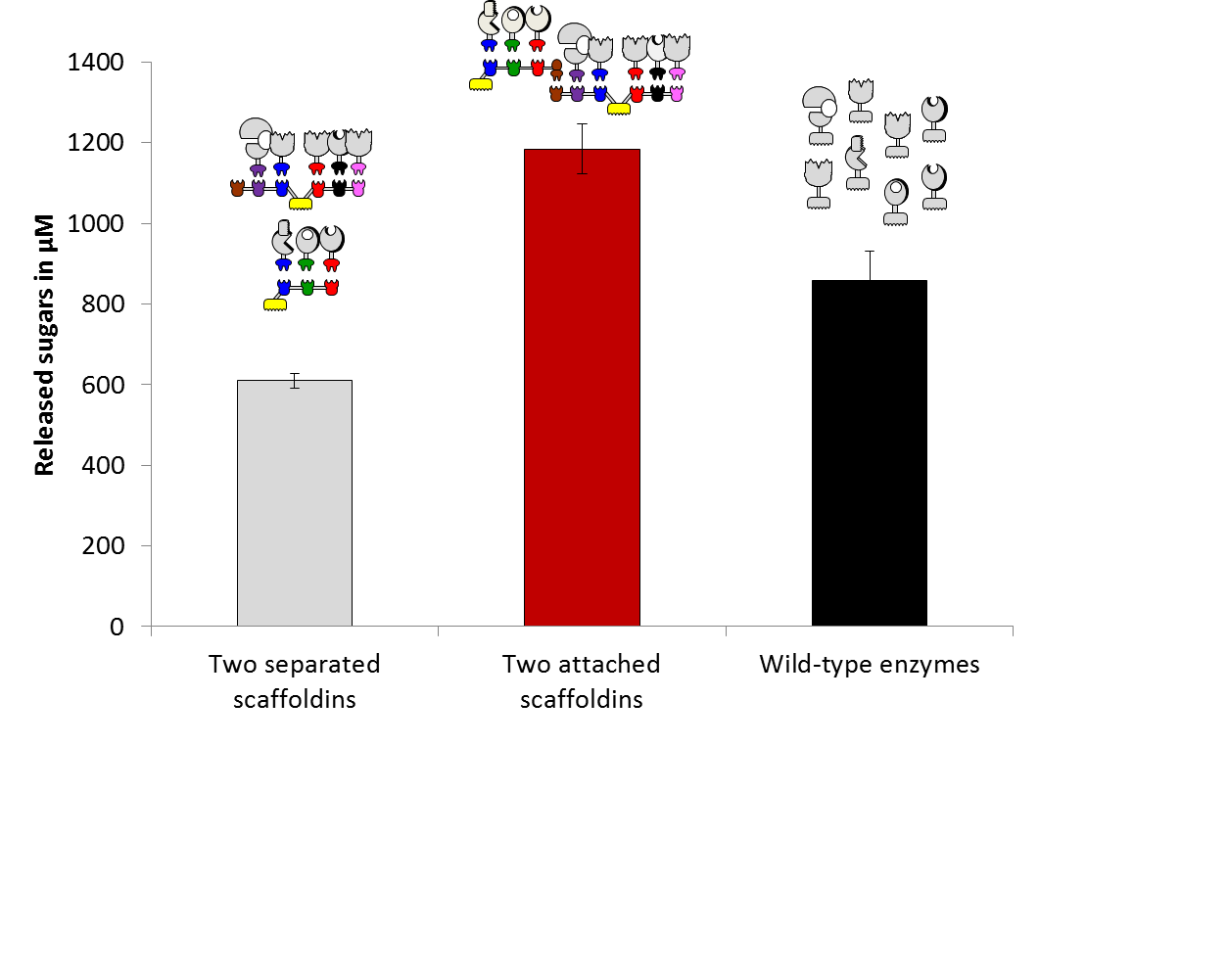