The history of the Department of Biophysics dates back to the foundation of the Weizmann Institute of Science in 1949.  It was decided at the time that the Institute would constitute of five major departments: Organic Chemistry, Polymers Research, Biophysics, Isotope Research and Mathematics, with the addition of other smaller units and laboratories.  Organic Chemistry research had already been in existence since 1934 in the previous Sieff Institute building and thus continued to be housed there, while the other departments and units were located in the new building of the Weizmann Institute (today the Ziskind building). 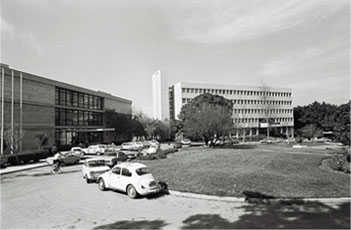 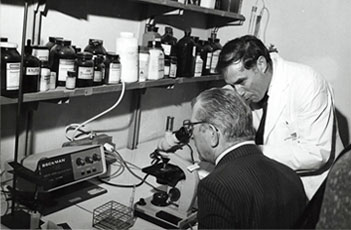 The creation of the Departments of Biophysics and Polymer Research were motivated by the rising recognition, at that time, of the importance of macromolecules in the processes of life, as well as the practical importance of the new materials of that period (nylon, plastics, etc.).  The leadership of these departments was offered initially to two prominent American scientists from the laboratory of Prof. Herman Mark in the Brooklyn Polytechnic Institute, a world-renowned laboratory in these areas of research.  However, since these candidates were reluctant to reside in the newly created State of Israel, a country whose future at that time was uncertain, the leadership was consequently offered to two scientists, Aaron and Ephraim Katchalsky (later Katzir). These brothers came to the Weizmann Institute from the Hebrew University in Jerusalem, which had suffered gravely from the loss of its campus in Mount Scopus as a result of the War of Independence, and who had already been nominated to act as Chief Assistants to the departmental heads.

The central idea in the early days was the study of structures and functions of biologically important macromolecules by means of model compounds. In the Department of Biophysics, under the leadership of Ephraim Katchalsky, main efforts focused on the synthesis of artificial polypeptides, made from one or a small number of amino acids. The synthesized new compounds were examined for their properties and biological activity, a research that branched and expanded throughout the years from model compounds to the proteins themselves.  Several model polypeptides showing interesting biological properties led to seminal contributions in the fields of medicine, industrial enzymology, affinity chromatography, chemical immunology and others. In addition, the initial work on the antigenic properties of the model polypeptides developed to reach the stage where a new department, Chemical Immunology, was formed in 1963 led by people from the Biophysics department.  In 1963, the Biophysics Department relocated to the new life science building (Ullmann building), occupying the entire second floor. 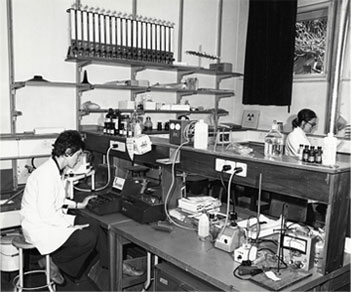 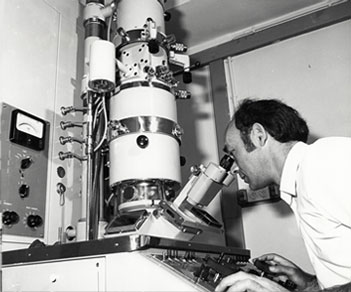 The Membrane Research Department (initially Membrane Research and Biological Regulation) was created as an offspring of the Polymers Research Department. The original object in establishing the department was to form a group to carry out research in plastics, which would be of assistance to the industrial development of the country. However, it became apparent that this aim was not practical, since the relevant industries at that time were at a stage too infantile to gain from such a research.  Therefore, under the leadership of Prof. Aaron Katchalsky-Katzir, the department mainly concentrated on the properties of polyelectrolytes, the colloid components of the living world, in solution. The main interest was to understand how the electrostatic forces that exist within the polyelectrolyte itself together with the ionic environment determine their spatial conformation. While this research was relevant to biological molecules such as proteins and nucleic acids, it touched also upon ion exchangers and water softening,desalting columns and membranes. This work expanded to a range of phenomena such as flow and transport through membranes, flow of macroscopic particles in suspension, including blood constituents, the direct conversion of chemical energy to mechanical energy and surface chemistry. In addition, this research  was complemented by developing physical theories of transport and polymer conformation.

The specialization of research into two main directions and the tragic loss of Prof. Aaron Katzir, who was murdered in May 1972 by a terrorist attack in Tel Aviv airport, catalyzed the move of a group of people in the Polymers Department to form a separate unit. This move was completed in 1974 with the formation of the Department of Membrane Research and Bioregulation that was consequently relocated to its new quarters in the basement of the Ullmann building. 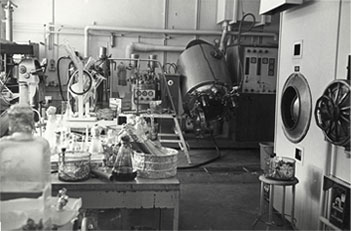 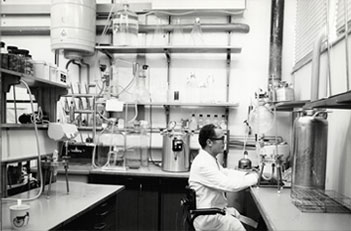 The Department of Biochemistry began in 1954 as a single laboratory named Section of Microbiology that was later changed to "Section of Biochemistry and Bacteriology" and then in 1956 to "Section of Biochemistry”. In 1957, when the Department of Isotopes vacated the Ziskind building and moved to the newly-built Physics building, it was decided to form an entire Department of Biochemistry that would occupy the vacated space. In contrast to other departments at that time,  the new department was neither headed by a single authority nor a central subject. Instead, there were a number of senior scientists who formed independent research groups, and in 1958 the department took definite structure around four main subjects: biological synthesis of peptides and proteins (headed by Theodor Winnick); ribonucleoproteins and ribosomes (headed by David Elson); RNA (headed by Uri Littauer), and photosynthesis (headed by Mordehay Avron). The first subject of research was abandoned when Prof. Winnick left to open a new department in Hawaii, whereas the others expanded and various research groups joined them, thus creating and developing new topics of research.