Time Domain Astronomy (TDA) and Gravitational Wave (GW) astronomy are at the frontier of astrophysics research. New and powerful surveys across the electromagnetic spectrum, from radio to X-rays (SKA, LSST, ZTF, eROSITA, EUCLID), are planned and carried out by the global community. The Ultra-Violet (UV) band is notable by its absence.

ULTRASAT will undertake the first wide-field UV time-domain survey. It will explore a new parameter space in energy (near UV), time-scale (6 month stares, with a 5-minute continuous cadence), and have a discovery rate >300 times larger than ever before. It will provide continuous NUV light curves to depths, for hot objects, comparable to contemporary ground and space-based time-domain surveys at longer wavelengths (e.g. LSST). Besides the key project goals listed below, it will provide continuous NUV light curves of hundreds of supernovae of all types, hundreds of tidal disruptions of stars by super-massive black holes, thousands of active galactic nuclei, and >105 flaring and variable stars. Rapid transient alerts will be provided to the global community.

Constrain the physics of GW sources

Ejecta from mergers involving neutron stars are predicted to radiate UV light detectable by ULTRASAT in their earliest phases, as observed in the GW170817 event. ULTRASAT will be able to slew in minutes to >50% of the sky, and its wide field-of-view amply covers the error ellipses expected from GW detectors in the 2020s. It will provide continuous UV light curves as well as early alerts that will enable ground-based follow-up spectroscopy and monitoring of optical and infrared emission predicted to arise later.

Collect early UV light curves of hundreds of core-collapse supernovae to measure the radii and surface composition of their massive progenitors, as well as to determine explosion parameters. Connecting the pre-explosion stars with their diverse explosive output will chart how the population of massive stars impact their environment through mass loss and explosion, and will specify initial conditions for explosion models. Mass loss tracers will further constrain pre-explosion evolution, allowing comprehensive investigation of the final evolution and explosive death of massive stars.

ULTRASAT will also provide continuous 6-month NUV light curves sampled every 300s to 22.3 AB mag (5σ, 3x300s) of millions of constant, variable, and transient sources near the north and south ecliptic poles. These will facilitate a wide range of additional science that the mission science team will explore, and provide a rich legacy data set that will be made available to the entire community. Finally, ULTRASAT will also provide an all-sky NUV image to 23 AB mag, 7 times deeper than the GALEX all-sky survey.

The rich data returns from ULTRASAT will drive a vigorous ground-based follow-up of static, variable and transient ULTRASAT sources.

Time domain surveys are a developing astrophysical discipline with an unusual discovery potential. There are three reasons for this. First, the static sky has been already well imaged in most electromagnetic bands. Second, new technology enables efficient monitoring of large swaths of sky. Finally, some of the most exciting frontiers, particularly those related to cosmic cataclysms, require wide-field synoptic surveys. It is therefore not surprising that large powerful surveys across the electromagnetic spectrum (SKA, LSST, ZTF, eROSITA), are at the focus of attention by the global community. However, a key piece, the UV, is missing from this synoptic suite.

The UV band is unique in its ability to probe the physics of hot sources (Table 1). Many of the interesting and exotic astrophysical sources shine mainly in the UV, and explosive transients are initially hot, so UV can provide the earliest notification. Thus, even a modest UV time-domain explorer has a vast discovery potential, and can secure observations needed to solve many major questions. It is this combination of timeliness and of great science that motivates the ULTRASAT mission.

The number of extra-galactic objects found by a survey per unit time is proportional to the “reach” R=ΔΩSm-3/2, where ΔΩ is the field of view (FoV) and Sm is the minimum detectable flux. ULTRASAT has similar sensitivity and much larger instantaneous FoV than the GALEX mission. The celestial volume monitored by ULTRASAT is over 300 times that of GALEX (see Fig.1). Historically, such great leaps in capability have led to marvelous discoveries, a major incentive for ULTRASAT.: Comparison of survey reach of ongoing and future synoptic surveys as a function of wavelength. The reach is the Euclidean volume per unit time covered by a survey. Thus, the larger the reach the greater is the discovery rate. The reach is normalized by setting the mid-band reach of ULTRASAT to unity. Curves are for blackbody sources of temperature 15,000 K.. 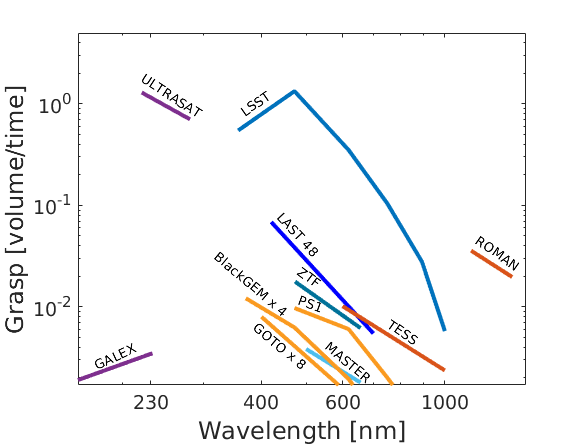 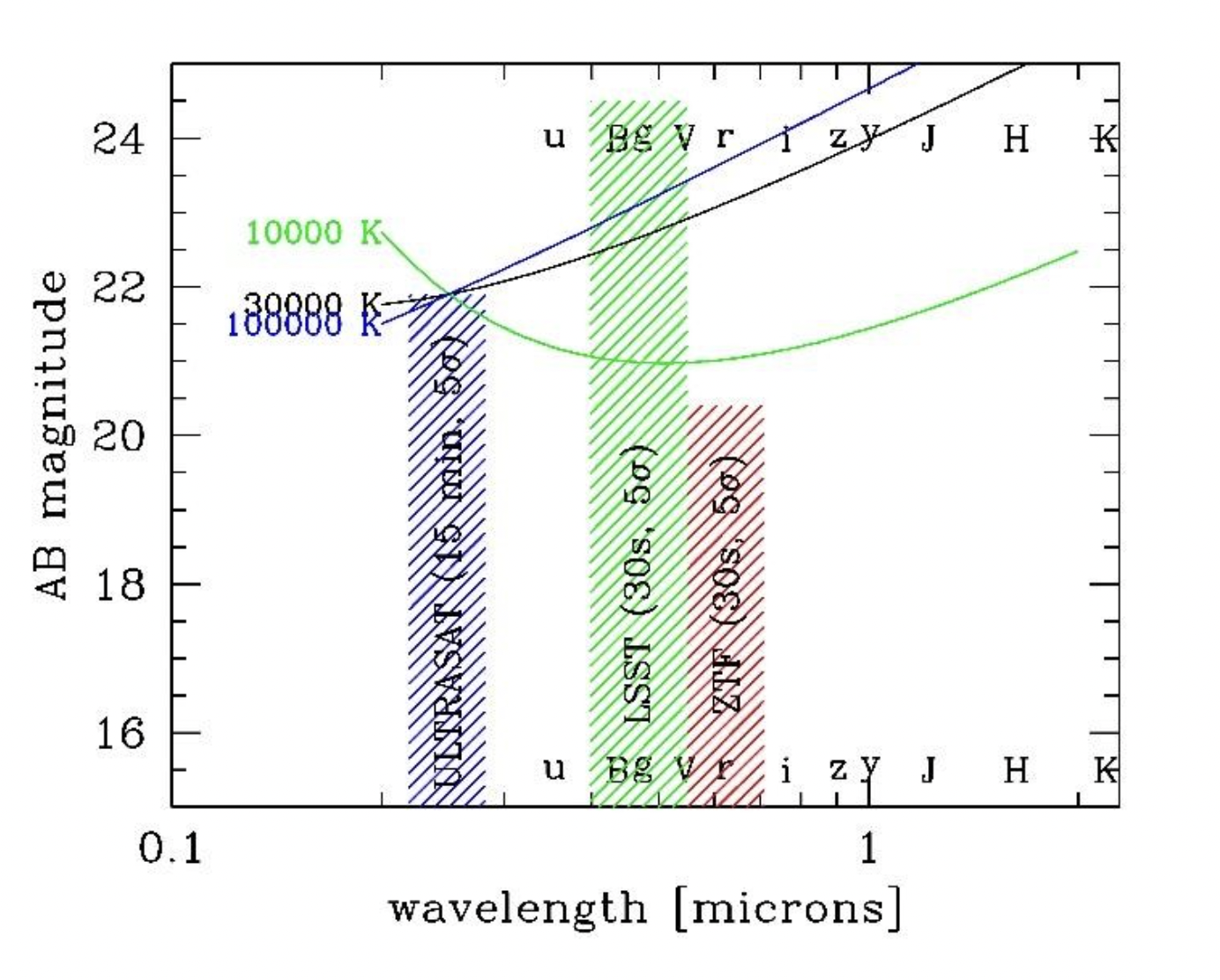 Figure 1. Left: Comparison of survey grasp of ongoing and future synoptic surveys as a function of wavelength. The grasp is the Euclidean volume per unit time covered by a survey. Thus, the larger the grasp the greater is the discovery rate. The grasp is normalized by setting the mid-band grasp of ULTRASAT to unity. Curves are for blackbody sources of temperature 15,000 K. Right:  A single ULTRASAT exposure will detect much fainter hot sources than ground-based synoptic surveys except LSST (which has only a very sparse cadence). The curves show NUV AB magnitude of blackbodies of the indicated temperatures, normalized at the ULTRASAT 900s 5σ limit of 22.3 AB mag.