Absolute asymmetric synthesis - The transition from the pre-biotic non-chiral to the chiral biological world:

The transition of non-chiral chemistry to homochiral biology is still regarded as a most remarkable hallmark in Nature. We have demonstrated the feasibility of stochastic “mirror-symmetry breaking” by the design of appropriate experiments in 2-D and 3-D crystalline architectures. This methodology was applied in the following processes:

(i) Absolute asymmetric synthesis in chiral crystals by crystal engineering.

(iii) Racemic beta-sheets as intermediates for the synthesis of homochiral peptides. 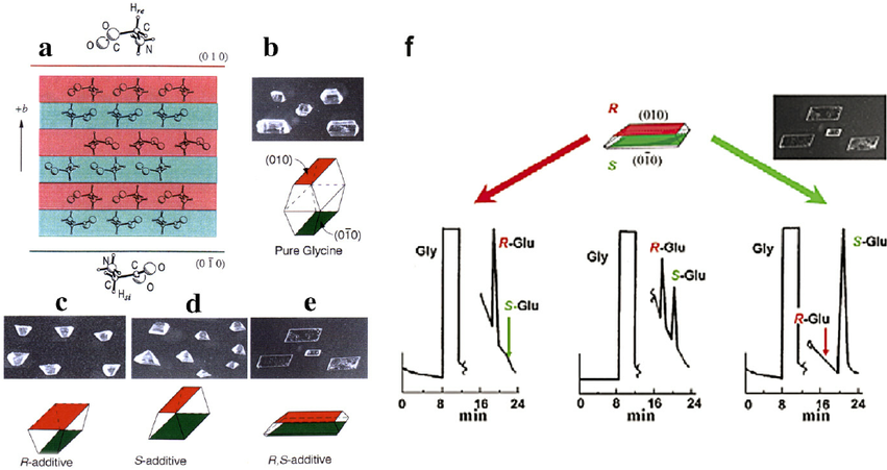 Figure 1: Centrosymmetric α-glycine (a) crystallizes as bipyramids (b). Gly crystals grown in the presence of R-or S-α-amino acids, display the habits (c), (d) respectively. The R-additive is adsorbed at the (010) face, retarding (010) facial growth. The S-amino acids retard growth of the (01̅0) face. R, S amino acid mixtures yield {010} plates (e). The R- and S-amino acids segregate within α-Gly crystals, into two halves of opposite chirality of reduced symmetry, as demonstrated in panel (f) via an HPLC analyses of occluded R, S glutamic acid in α-Gly crystals.