Chemokine receptors and adaptors on microvilli

Our earlier work has shed light on the earliest signals transmitted by chemokines through their G-protein coupled receptors (GPCRs) to distinct leukocyte integrins (Scheme 1). In lymphocytes, the integrin adaptor talin1 was found to control major conformational changes of both LFA-1 and VLA-4 integrins implicated in lymphocyte arrest on endothelial ligands.

An open question raised by these findings was how GPCRs transmit these conformational changes within fractions of seconds to rolling lymphocytes. Leukocyte microvilli are highly elastic actin-rich projections implicated in rapid sensing of cellular surfaces and penetration across glycocalyx barriers. T lymphocyte arrest on high endothelial venules is initiated by a three-step cascade of capture and rolling mediated by L-selectin, followed by sub-second activation of the integrin LFA-1 by the G-protein coupled receptor CCR7 and its lymph node high endothelial venule (HEV)-displayed ligand, the CCL21 chemokine. A long-standing question in the field has been how CCR7 encounters endothelial-displayed ligands such as CCL21 and transmits signals to LFA-1 almost instantaneously.

To address this question, we joined forces with the lab of G. Haran (Dept. of Chemical and Biological Physics, WIS) to follow the topographical distribution of CCR7 and of LFA-1 in relation to each other and to lymphocyte microvilli. To that end, we applied the microvillar cartography imaging technique, recently developed the Haran lab to image labeled blood borne T lymphocytes (PBL). This method is a combination of total internal reflection fluorescence (TIRF) microscopy and stochastic localization nanoscopy (SLN), and was successfully used to determine the topographical distribution of key surface molecules on T cell microvilli including TCR, L-selectin, and CD45.

Our recent findings suggest that CCR7 is clustered on the tips of T cell microvilli, whereas L-selectin is more randomly distributed on these projections (Fig. 1A). Strikingly, whereas the vast majority of LFA-1 molecules were found assembled in macroclusters on the cell body, a specialized subset of LFA-1, 5% of the total, were found in small dots within 20 nm from the CCR7 clusters on tips of microvilli (Fig. 1B). These results implicate this specialized subset of microvillar LFA-1 molecules as a target for rapid inside-out activation signals transmitted within sub-second time frames by chemokine-bound CCR7. We propose the intriguing possibility that tips of lymphocyte microvilli are novel hubs for rapid CCR7 mediated inside-out signaling to a small subset of neighboring LFA-1 molecules. Our data also argue against the possibility that CCR7 signals from one microvillus activate LFA-1 subsets on another microvillus. Instead, we propose that individual microvilli are functional CCR7 hubs on which small subsets of LFA-1 undergo in-situ activation by signals from proximal CCR7 molecules occupied by CCL21. We also propose that the unique location of CCR7 on tips of microvilli help the GPCR to penetrate through the endothelial glycocalyx and encounter heparan sulfate presented CCL21. Our data are thus a new unifying mechanism for the functions of L-selectin, CCR7, and LFA-1 in lymphocyte arrest on HEVs.

In contrast to LFA-1. VLA-4 is enriched on T cell microvilli. In previous studies we also found that VLA-4 anchorage to the cytoskeleton is enhanced by the cytoskeletal adaptor paxillin, which cooperates with talin1 to promote the activation of this integrin under external strain but is not essential for chemokine stimulated integrin activation. Experiments with T cells in which talin or paxillin transcription has been silenced suggest that these two adaptors regulate distinct and complementary roles in VLA-4 adhesiveness to the major endothelial ligand VCAM-1.

In addition, we found a major role for the coactivating adaptor, Kindlin-3 (absent in T cells, neutrophils, and platelets from LAD-III patients) in chemokine mediated integrin activation in human leukocytes. In collaboration with R. Fassler (Max Planck Institute for Biochemistry, Martinsried, Germany) we studied the role of this adaptor in both human and murine T cells. 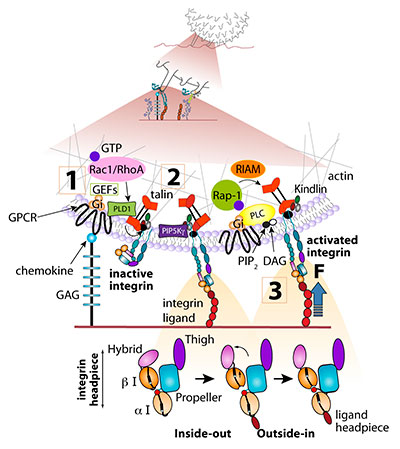 Scheme 1 A postulated scheme for rapid chemokine signaling to lymphocyte LFA-1 under shear flow (Top). A rolling leukocyte tethered to an integrin ligand must encounter juxtaposed chemokine at the site of integrin activation, possibly a single microvillus. A quaternary complex between integrin, ligand, chemokine and G-protein coupled receptor (GPCR) must form within milliseconds to locally activate the integrin ligand complex via a bi-directional signaling event (bottom). Only a fully activated integrin can arrest the rolling leukocyte on the vessel wall while partially activated integrins can participate in rolling adhesions (see Figure 1). Upon initial encounter, endothelial-bound chemokine transduces leukocyte GPCRs signals which convert the inactive (folded) integrin to its extended conformation (step 1). GTP bound RhoA and Rac1 are involved in this step in the case of lymphocyte LFA-1. This critical chemokine-driven inside-out event primes the integrin to transiently bind endothelial ligands on the counter endothelial surface. The various I-domains undergo further conformational shifts upon extracellular ligand binding (step 2), resulting in further integrin activation (outside-in). This ligand-driven step is predicted to result in further separation of the integrin subunit tails, conditional on the presence of talin nearby the ligand occupied integrin, and force transduction (step 3). Clustering of ligand-occupied integrins (not shown) can rapidly follow. Force transduction may lead to talin activation, recruitment of vinculin and crosslinking of integrin-talin complexes to the cortical actin cytoskeleton, all within seconds after initial leukocyte arrest. The additional involvement of Rap1 and its effectors RIAM and RAPL (not shown) in GPCR transduced inside-out activation is suggested for LFA-1 activation by chemokines, whereas PKC is necessary for full VLA-4 activation. 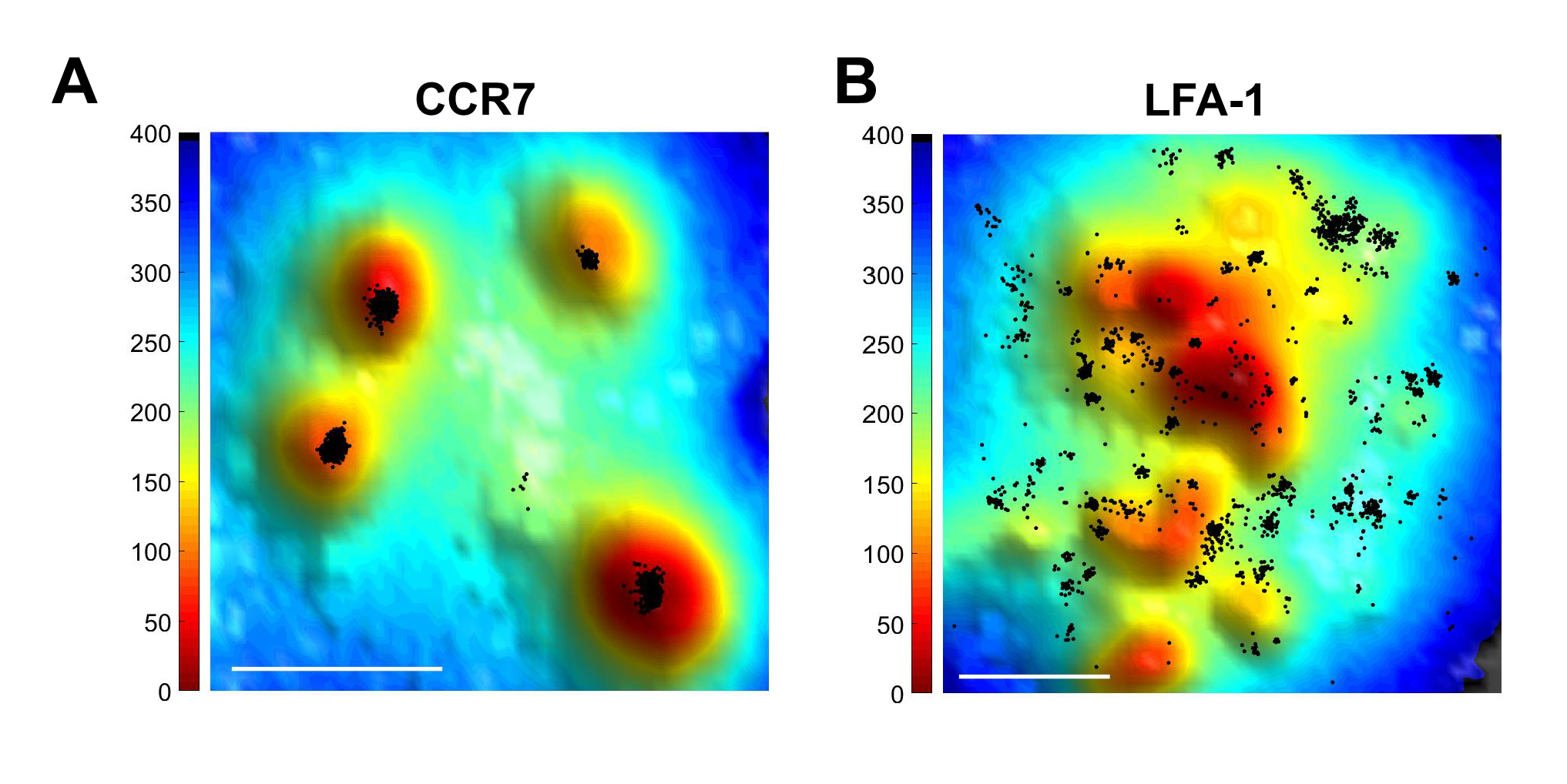 Figure 1 Super-resolution microscopy of CCR7 and LFA-1 on T cells.

Total internal reflection fluorescence (TIRF) microscopy with stochastic localization nanoscopy (SLN) in fixed T cells co-labeled with either Alexa-647 probe of CCR7 (A) or anti LFA-1 (B) and the membrane probe FM143Fx. Tips of microvilli are depicted in red; the T cell body is depicted in blue.